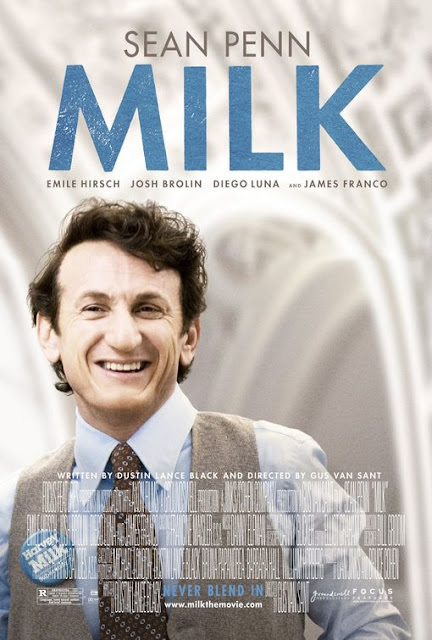 The 2000s were a tragically sparse decade for high-profile queer cinema. Whereas the 1990's contained a surprisingly steady stream of mainstream pieces of filmmaking with queer protagonists, such films had been relegated solely to arthouse cinemas in the first decade of the 21st century. Even after Brokeback Mountain scored widespread acclaim and a robust domestic box office haul in 2005, it'd be another three years before another film with a queer protagonist managed to get a wide enough release to make over $1 million domestically. That movie would end up being Milk, a Gus Van Sant directorial effort that turned out to be one of the most acclaimed features in the man's career.

As the title implies, Milk is about Harvey Milk, the California politician who made history by being the first openly gay elected official in American history. The movie begins in 1970 as Harvey turns 40 years old and begins to contemplate how he hasn't done anything meaningful in his life. Looking to change that, he heads across the country with his boyfriend Scott Smith (James Franco) to San Francisco where maybe Harvey can make the kind of change he's been itching to create. Once there, Harvey begins to take on some unsuccessful bids to be elected as a city supervisor that make him realize that his calling is in politics. He can be the kind of politician that's never existed before, someone who provides hope to the marginalized just by existing in a space that previously exiled him.

Like the best biopics, Milk keeps its central figure squarely rooted in reality instead of deifying him. Harvey Milk's accomplishments were impressive and monumentally important but Dustin Lance Black's script makes the right call to portray Harvey Milk as a man rather than as a grandiose legendary figure whose every touch turned the items around him into gold. The immediately established framing device for this story, which provides frequent doses of narration from our protagonist, does a great job of making this mythic figure human by showing Harvey Milk, alone at his dinner table at night, recording the recounting of his own life in his own words into a tape recorder in case of assassination.

Harvey Milk is keenly aware of his own mortality and wants to take every necessary precaution to make sure that his voice and perspective are not snuffed out even if his mortal form is. Seeing Harvey Milk in this state, cognizant of his own vulnerability but marching on anyway, is a quietly inspiring sight and similarly affecting moments crop up throughout the rest of the movie. Perhaps the most poignant of these other emotional moments is final ending scene that shows how Milk's cause really is bigger than just one man. Black's screenplay does a stellar job exploring nearly a decade in this man's life without feeling like we're rushing through important plot details which feels like an outright triumph to see in an American biopic feature.

A similarly high level of quality can be found in the movies lead performance courtesy of Sean Penn in his last big turn as an actor before he basically vanished from acting so that he could have more time to pursue his hobbies like interviewing El Chapo. Portraying a distinctive person like Harvey Milk could result in a performance that's more of a caricature than anything else so it's great that Penn takes a cue from the script and lends tangible humanity to his role. Milk is a larger-than-life symbol of inspiration for so many and Penn's performance as Harvey Milk communicates a sense of understanding and compassion in his more intimate scenes with the other characters that make it clear why this guy would become so beloved.

Meanwhile, Josh Brolin plays Harvey Milk's eventual killer Dan White and, like Penn, Brolin does a fine job bringing an individual whose become a figure of legend back down to Earth. Both the script and Brolin do an especially good job of making sure going in this specific grounded route for their depiction of White doesn't inadvertently render this guy as a sympathetic figure, on the contrary, it makes his climactic violent rampage all the more disturbing to watch. Among the supporting players, Diego Luna and the criminally underrated Allison Pill are the biggest standouts while it's delightful to see High School Musical standout Lucas Grabeel in a small role.

Speaking of big name performers working on Milk, it's also nice to see Danny Elfman doing the score for a 21st-century movie that isn't just a quirky Tim Burton knock-off. He does good enough work here in the score to make me wish he more regularly did the music for modern dramas, though he did, at least, reunite with Van Sant for last year's small-scale drama Don't Worry, He Won't Get Far On Foot. That particular directorial effort was the best feature from Van Sant since his work on Milk which shows plenty of skill from Van Sant in terms of how he directs the actors and makes sure the humanity of its lead character doesn't get lost the bigger in scale the story gets. It's good that Van Sant keeps such a good eye on that latter element since one of the best parts of Milk as a film is that it does such an excellent job showing Harvey Milk as a human being, and in the process, subtly reminds all us fellow human beings of what kind of change we can possibly make in society.
Posted by Douglas Laman (NerdInTheBasement) at 2:29 PM