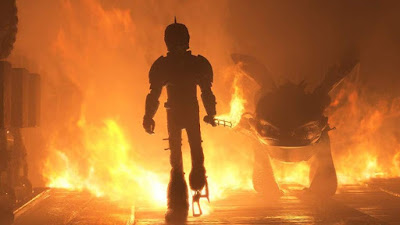 Back on Friday, it looked like a more neck-and-neck race for the top spot at the domestic box office between How to Train Your Dragon: The Hidden World and A Madea Family Funeral, but the animated dragons had the upper hand, though both titles managed to prosper over the first weekend of March 2019. The first seven weekends of 2019 might have been slow, but as this weekend shows, injecting some compelling titles into the marketplace will always get things back on track. Topping this frame was How to Train Your Dragon: The Hidden World with a $30 million second weekend haul. That's a 45% drop from last weekend, an improvement over the 50% drop of the second movie and the biggest second-weekend for any entry in the series. With $97.6 million after ten days of domestic play, The Hidden World looks like it'll make a serious play for a domestic total just over $200 million.

Moving on to more holdovers, in third place we find Alita: Battle Angel, which grossed $7 million this weekend, a 43% drop from last weekend for an underwhelming domestic total of only $72.2 million. The LEGO Movie 2: The Second Part actually held well this weekend with only a 31% dip for a fourth-weekend gross of $6.6 million but its domestic gross stands at only $91.6 million. Rounding out the top five was the most recent Best Picture winner Green Book (I know, I hate just writing that out) which went back into 2,641 locations this weekend and grossed another $4.7 million for a domestic total of $75.9 million. Right behind it was Fighting With My Family with $4.69 million, a 40% drop from last weekend, which isn't great for a title meant to be buoyed by strong word-of-mouth. Fighting With My Family has grossed only $14.9 million domestically. In its third weekend of release, Isn't It Romantic grossed another $4.64 million, a 34% drop from last weekend, for a domestic total of $40.2 million. Can this one get the extra $9.8 million it needs to crack $50 million domestically?

Our only other new wide release this weekend was Greta, which grossed only $4.5 million, a poor showing for a movie opening in over 2,400 locations. There's not much to say about this title, which didn't get much in the way of marketing and seemed to be an awkward release for Focus Features, which doesn't have a tremendous amount of experience marketing and releasing wide release thrillers. Both of those elements seemed to have been the key reasons behind its lackluster bow.

Moving on to the holdovers, What Men Want dropped 48% this weekend for a $2.7 million fourth weekend, bringing it up to a domestic total of $49.6 million. Happy Death Day 2U rounded out the top ten with a $2.5 million sum, a 48% drop from last weekend, for a $25.2 million domestic total which is still below the opening weekend of its predecessor. Fresh off its Best Animated Feature win at the Oscars, Spider-Man: Into The Spider-Verse went back into 2,404 locations and grossed another $2.1 million for a per-theater average of $874 and a fantastic domestic total of $187.3 million. The Upside kept on chugging this weekend as it dipped only 35% for an eighth weekend gross of $2 million for a domestic gross of $102.8 million. Also increasing its theater count this weekend, this time to show an extended cut, was A Star Is Born, which grossed $1.88 million from 1,235 locations for a $1,526 per-theater average in its 22nd weekend of release. This movie just keeps on going and going like the Energizer bunny! A Star Is Born has grossed $212.9 million.

NEON had a rough 2018 at the domestic box office save for the CNN Films documentary Three Identical Strangers. The studio kicked off their 2019 in excellent form with another CNN Films documentary, Apollo 11, which launched with $1.65 million from 120 IMAX locations for a per-theater average of $13,750, the biggest opening weekend ever for NEON. Maybe they should just stick to release documentaries? Cold Pursuit, in its fourth weekend of release, dropped 48% for another $1.6 million for a lackluster $29.9 million domestic gross. Yet another Oscar-winning movie to increase its theater count this weekend was Bohemian Rhapsody, which went back into 839 locations to gross $975,000 for a per-theater average of $1,162 and a domestic total of $214.4 million. Bohemian Rhapsody has now surpassed the $213.7 million domestic total of Solo: A Star Wars Story to crack the top ten biggest movies at the 2018 domestic box office.

The top 12 movies this weekend grossed a title of $98.7 million, only the tenth biggest ninth weekend in any given year and it's down 29% from this same weekend last year. However, this isn't far off from the average sums seen in years past and it's actually up from the same weekend in 2016, 2015 and 2013.
Posted by Douglas Laman (NerdInTheBasement) at 10:36 AM