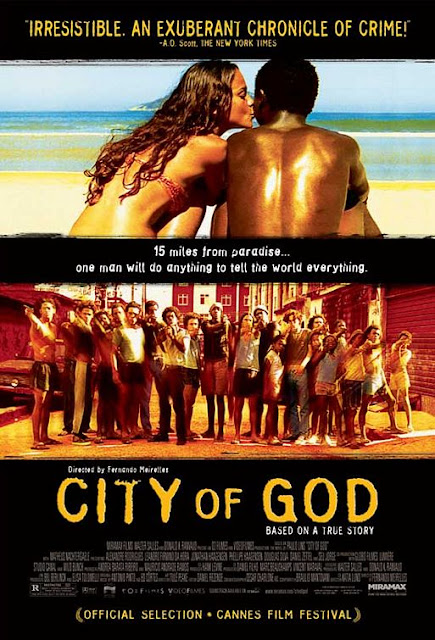 City of God is one of those movies that grabs you, doesn't let go and you hope it never loosens its grip. What an intoxicating portrait of how so many seemingly disparate lives end up becoming intertwined over the course of nearly thirty years. Set in Cidade de Deus, Rio de Janeiro, also known as "the City of God" (hence the title of the film), City of God explores how exactly a massive war between two criminal enterprises began. Turns out, such a feud has humble and unexpected origins in a small neighborhood occupied by a child version of our protagonist Rocket (played as an adult by Alexandre Rodrigues). Rocket guides the viewer through the elaborate story that follows chronicling the rise of eventual big-time criminals like the sadistic Li'l Ze (Leandro Firmino).


To tell that tale though, one can't just know the origins of Li'l Ze, there's plenty of other people and even personal events in the life of Rocket one must learn about in great detail before one can truly understand who Li'l Ze is. The script for City of God is penned by Braulio Mantovani and it's an expansive creation that constantly takes intentionally abrupt detours that allow these characters and the morally complicated world they inhabit to be fleshed out. For instance, in one of the best scenes in all of City of God, we learn about the backstory for the apartment Li'l Ze and his associates now occupy. In the span of a single shot, we see people come, people go, lives flourish, lives disintegrate, criminals rise and criminals fall. It all happened in this one room.

Watching all of this transpire in the span of a single take, with subtly incorporated visual cues like deteriorating wallpaper helping to communicate the passage of time, was an experience that left me awestruck. It's a beautifully executed sequence that perfectly shows how so many people's lives can be interconnected through something as simple as an apartment building as well a demonstration of how fleshed out everyone and everything, including an intimate room, is in this heavily-detailed production. Both of these elements serve as some of the most crucial aspects of City of God and they're both on full display in this exquisitely-executed sequence that may just serve as an effective microcosm of the whole feature.

Capturing so many years in the space of a single shot is one of the countless creative visual flourishes scattered throughout this magnificent piece of filmmaking with another of these flourishes being how vibrantly alive the camera is. Cinematographer Cesar Charlone is constantly moving the camera around, the camera's gaze is constantly shifting as if it's afraid to miss even one second of activity occuring it. Describing the camerawork in this way makes it sound distractingly hyperactive, but instead, Charlone's work behind the persistently moving camera captures the idea that the heavily populated world of City of God is so constantly on the move that the camera can barely keep up with it.

This type of camerawork is also simply ever so fun to watch and this kind of camera movement, as well as numerous instances of brilliant shot compositions, make City of God as rich of a visual experience as it is on a thematic level. That's truly a compliment given how thoroughly compelling this movie is on a character level. The aforementioned story structure that sees hordes of details being attached to everyone in the story ensures that even the most tertiary characters garners some kind of depth and that even manages to include the sadistic Li'l Ze. Despite seeing how much of a vicious killer this character has been since childhood, there's a moment midway through City of God where Li'l Ze manages to elicit empathy from the viewer. Such a seemingly impossible occurrence transpires right after Li'l Ze loses someone near and dear to his heart and in response to this tragic turn of events, he lets out a wail of pain and sorrow.

In that moment, my heart went out to a character who previously inspired only revulsion in me. Like in Barry or Breaking Bad, City of God is so well-written that it manages to get a viewer to feel momentary sympathy for a character that shouldn't be capable of eliciting this sensation. An even greater sense of sympathy is elicited from the viewer towards another criminal figure, Knockout Ned (Seu Jorge), whose transition from mournful soul to bloodthirsty criminal overlord is depicted as a haunting Shakespearean tragedy. City of God doesn't excuse his eventual acts of cruelty like wanton violence nor does it want the viewer to do that but through spending time exploring what personal motivations informed him joining the world of criminal activity in the first time, we're able to empathize with him and see that there's a human being buried under all the gunfire and unquenchable thirst for vengeance.

Ah, vengeance, it's perhaps the element of City of God that most motivates the majority of its characters. The way vengeance serves as a recurring impetus for criminals throughout different generations in Cidade de Deus, Rio de Janeiro reminded me of a line from the song My Shot in Hamilton: "Or will the blood we shed begin an endless cycle of vengeance with death as the only descendant?" Such a cycle sucks in many souls throughout the course of City of God and directors Fernando Meirelles and Katia Lund capture this process in a manner that's harrowing (that scene where Li'l Ze and his men confront a group of child criminals feels like the very definition of harrowing), empathetic and utterly captivating. No wonder I didn't want City of God to let go of me once its ingenious filmmaking grabbed ahold of me.
Posted by Douglas Laman (NerdInTheBasement) at 2:04 PM