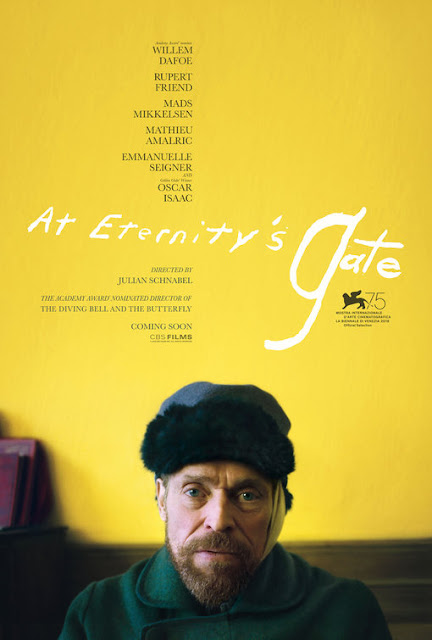 Every Academy Awards ceremony, there's one movie that comes out of nowhere to score a nomination in the acting categories and then have no other Oscar nominations to its name. The most prominent example in recent years was the baffling nomination of Robert Duvall in The Judge in Best Supporting Actor while another modern example of this trend was Viggo Mortensen in Captain Fantastic. For the most recent Academy Awards ceremony, the film that kept this tradition alive and well was At Eternity's Gate, a new film from director Julian Schnabel that managed to get Willem Dafoe his fourth Oscar nomination (and his first ever in the Best Actor category) for portraying the painter Vincent van Gogh.


From the trailers, I was actually kind of dreading At Eternity's Gate because it looked like my least favorite kind of biopic, the ones that turn into just extensive praising of their non-fictional lead character to the point of deification without doing any kind of introspection that reminds viewers of the humanity of pivotal historical figures. Luckily, the film itself does not down this particular route for its depiction of Vincent van Gogh, on the contrary, it goes in the opposite direction in its retelling of the last two years of the life of this now revered painter. The mortality of van Gogh is constantly on the mind of At Eternity's Gate as it portrays all the torment that informed this man's perspective on the world.

From the start, Vincent van Gogh is shown to not be a popular soul even among his fellow artists. Only van Gogh's brother and a fellow artist by the name of Paul Gauguin (Oscar Isaac) are friendly to him and they're both, at best, sporadic presences in his life. Throughout the story, we see van Gogh's process for painting, which entails him hightailing to the nearby countryside for some artistic inspiration, as well as the bevy of mental health problems he endured that were so severe in nature that they led him to briefly stay in an asylum. While navigating his own personal issues and being a societal outcast, van Gogh continues to pursue his passion for painting. It's all he can do, so why not try to do it whenever he can?

At Eternity's Gate comes up with plenty of unique ways to explore the perspective of Vincent van Gogh, particularly in any scene depicting the character going out on his own to paint. Extended passages of the story simply show Willem Dafoe navigating the countryside to the tune of orchestral music before he gets interrupted by external elements of the world he can't control, namely the arrival of other people, like a group of curious schoolchildren. Once people like these youngsters arrive on the scene, reality comes crashing into both van Gogh and the movie as the music vanishes, the camera, which previously had been a great distance away from van Gogh, is placed in the middle of the characters while the editing becomes frantic and jumpy.

When he's in the zone of painting, van Gogh finds some sort of escape, but even here outside factors, like jealousy tied into the works of Gauguin, can negatively impact his work. "Reality Bites" as an iconic 1990's movies title once said and that's a sentiment that Vincent van Gogh, as depicted in At Eternity's Gate, would echo. This depiction of van Gogh's internal perspective on the world ends up  getting repetitive after a while, especially since it's the primary element in van Gogh's life that the movie focuses on. There's not much else to be gathered about this depiction of van Gogh beyond just the dynamic between his time spent painting and his time spent in reality and that deprives a viewer of the chance to get to know this painter better as a more well-rounded person.

Still, enough of these sequences chronicling how reality intrudes on van Gogh's artistic ambition manage to be reasonably evocative in execution, not to mention demonstrating plenty of ambition on a conceptual level to keep the movie reasonably engaging while Willem Dafoe's lead performance picks up the slack anytime At Eternity's Gate is threatening to become too wearisome. Among his many gifts as an actor, Dafoe has always had a knack for communicating years of palpable woe just by standing around whether he's a motel manager in The Florida Project in his brief screentime in Murder on the Orient Express. That's clearly a talent that's well-suited a movie all about the internal woes of Vincent van Gogh and Willem Dafoe does a tremendous job in his performance painting a vivid & haunting picture all the pain Vincent van Gogh endures on a daily basis.
Posted by Douglas Laman (NerdInTheBasement) at 12:32 PM