Kiss Me Deadly Is A Fascinating Reflection of 1955 American Society 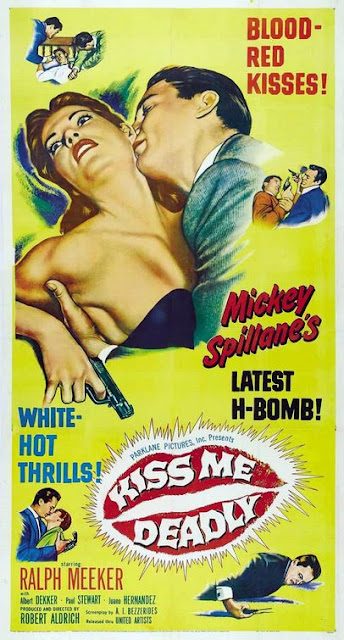 By the time Kiss Me Deadly was released in May 1955, audiences were ready for a slightly new approach to the beloved film noir genre. A staple of 1940's American cinema, film noirs continued to get made well into the 1950s and beyond, but like any genre that endures throughout numerous decades, it had to also evolve along the way. For Kiss Me Deadly, a directorial effort from Robert Aldrich, this meant embracing a slightly darker tone than the already grim aesthetic of conventional film noirs. Though the restrictions of the Hayes Code meant that Kiss Me Deadly couldn't get too grim, the feature would still have a bit more edge and teeth than audiences in this era might have been expecting.

Like so many film noirs, it all starts off on a seemingly normal night. Mike Hammer (Ralph Meeker) is driving down the road when he sees a woman, Christina (the one and only Cloris Leachman) in need of a ride. She exhibits plenty of strange behavior in their brief time together and that's before some random thugs drive them off the road and take them off to God knows where. Eventually, Mike reawakens and learns that Christina has died. Mike isn't a good man, what with his primary occupation being a slimy private investigator who tears apart marriages and all, but he can't just stand on the sidelines and let Christina's death go. Thus, he begins looking for clues behind who's responsible for her murder

As he hunts down the truth, Mike repeatedly demonstrates how he isn't above using physical force to get his answers. This is where much of the darker tone of Kiss Me Deadly comes into play as Mike dishes out violence that can only be properly communicated through squirm-inducing sound effects. Such violent treatment leaves numerous characters moaning in pain afterwards while Mike himself receives his fair share of violent beatings that leave him all scarred up. Why, the opening sequence alone of this motion picture ends with an intense car crash that leaves Mike disoriented, bruised up and terrified.

Compared to any action fare made in 1967 onward, Kiss Me Deadly is certainly as tame as Katherine Hepburn's pet jaguar in Bringing Up Baby. But for American cinema in 1955, this was rougher than usual play for film noirs and lends Kiss Me Deadly a unique sense of grittiness among its peers from this era. It feels suitable that this story would end up so heavily utilizing this dour aesthetic given that the plot eventually reveals that the MacGuffin spurring the murder of Christina in the first place relates to atomic energy, a then newly-enacted force of manmade weaponry that was changing the world to a scary degree in 1955, hence why anyone in Kiss Me Deadly who has any desire to actually possess that energy ends up meeting such a gruesome end.

Kiss Me Deadly is clearly a byproduct of 1955, right down to a pair of supporting mechanic characters who serve as the over-the-top racial caricatures that stick out like a sore thumb in a movie so serious. Aside from that bit of racially insensitive writing though, Kiss Me Deadly's extreme relevance to 1955 society makes it utterly fascinating to watch in 2019 rather than rendering it a tired cinematic equivalent to a time capsule. Film noirs have constantly been an effective way to explore real-world drudgery in cinematic storytelling and Kiss Me Deadly continues that tradition through its depiction of a world driven by people looking out for personal gain that can be just as grim and sadistic as our own.

That greater sense of context in terms of how it reflected then modern-day concerns as well as how it differentiated itself from typical film noirs make Kiss Me Deadly immensely fascinating to think about while the film itself is plenty entertaining to watch on its own stand-alone merits. The fact that the screenplay keeps making Mike's quest for the motive behind Christina's demise turn up as many, if not more, dead ends than emotionally fulfilling answers is especially fascinating, there really aren't any tidy answers to be found in Mike's investigation here. That makes for a frustrating experience for Mike, but for us viewers, it just makes Kiss Me Deadly all the more compelling to watch.
Posted by Douglas Laman (NerdInTheBasement) at 4:20 PM