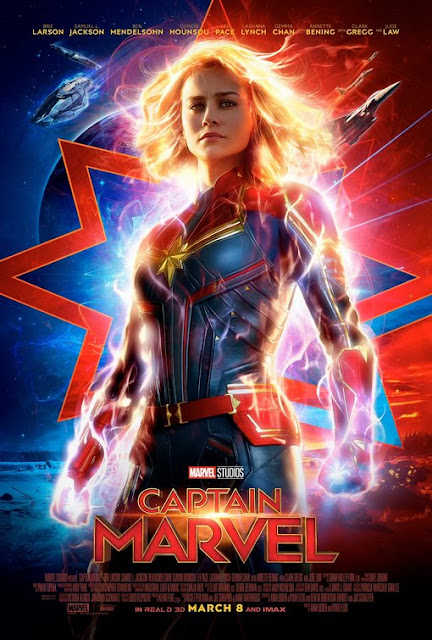 Remember how twelve years ago Fantastic Four: Rise of the Silver Surfer turned Galactus into a gigantic cloud because the prospect of doing a comic book accurate version of the gigantic space God in a purple hat was apparently too goofy for a live-action movie? Well, welcome to March 2019, where the modern cinema scene is so immersed in oddball comic book cosmic details that Captain Marvel can open, with no introductory text crawl or some expository voice-over narration, with its titular lead superhero living a day-to-day life on the alien planet Hala under the names Vers while Academy Award nominee Jude Law portrays her mentor who talks about the "Kree Supreme Intellegence" and warns his pupil about the dangers of shape-shifting Skrull aliens.

The Marvel Cinematic Universe has frequently shown an affinity for weird cosmic storytelling and Captain Marvel continues that tradition nicely from the get-go. These opening sequences establish not only that this story won't be dialing back on the outer space tomfoolery, but also show that Vers, who has no recollection of her life before she arrived on Halos six years ago, is part of an elite taskforce for the alien species called Kree. While on a mission to rescue a captive Kree soldier, Vers faces off against Skrull operatives, including Skrull head honcho Talos (Ben Mendelsohn). This encounter eventually leads her to end up on Earth, where she teams up with a two-eyed S.H.I.E.L.D. agent by the name of Nick Fury (Samuel L. Jackson) to stop any more nefarious plans the Skrulls have in store for Earth and the Kree people.

Captain Marvel is at its weakest in its initial scenes, which hit the ground running in a way that's admirable for how readily it embraces cosmic weirdness but also has its fair amount of shortcomings. Chiefly, these early scenes feel like they needed more breathing room to allow both all the information being tossed out at the audience to be properly processed. There's a whole lot of exposition to get through in the initial ten or so minutes of Captain Marvel and it typically emerges in the form of clumsy expository dialogue that keeps making the characters sound less like people and more like pieces to get the plot moving in a certain trajectory. An oddly underlit, and visually murky as a result, early action sequence is similarly underwhelming.

Once Vers gets kidnapped by the Skrulls, though, the plot really gets down to brass tacks and from here things pick up considerably. A cleverly edited sequence involving the Skrulls poking around in her head makes it clear that all the set-up is out of the way and it's time to have fun with Vers and the cosmic world she inhabits. The action sequences improve considerably in both lighting and how they're filmed while the expository dialogue is traded out for witty banter between Brie Larson and Samuel L. Jackson, these two actors have incredibly entertaining chemistry in their time together and it's nice that the script makes sure Nick Fury works as a stand-alone character here and not just as an Easter Egg for MCU nerds with no lives like myself.

Speaking of the script, kudos to the numerous writers involved here for coming up with a story that does a great job making Captain Marvel a character worth becoming dramatically engaged in, something a lot of movies with amnesiac main characters (howdy Cowboys & Aliens!) struggle to actually do. This newest MCU protagonist has a compelling swagger about her, both in the writing of the character and in Brie Larson's terrific lead performance, that makes her riveting from the get-go, you totally believe she could knock out a whole team of antagonistic aliens, no problem. That quality makes one want to follow her on her journey to figure out more about who she actually is which ends up culminating in a spectacular poignant climactic sequence that evoked the What's Up Danger? scene from Spider-Man: Into The Spider-Verse.

Any of the big triumphant moments in Captain Marvel work like gangbusters, which speaks volume to how successfully the screenplay realizes this lead character. It's a character that Brie Larson takes to like a duck to water whether she's beating up Skrulls, dropping wry one-liners or conveying vulnerability, Larson's just thoroughly exceptional and effortlessly natural in the role. Samuel L. Jackson and Jude Law make for both great performers to play off of Larson and strong performances in their own right while Djimon Hounsou, Lee Pace and Gemma Chan don't have much of anything to do in throwaway supporting roles. The biggest stand-out's in the supporting cast are easily Lashana Lynch in a revelatory turn as pilot Maria Rambeau and Ben Mendelsohn giving maybe one of his best film performances ever as Talos.

Mendelsohn's Talos and his fellow Skrulls are coated in impressive-looking make-up effects that are shockingly realistic while the costumes, most notably Captain Marvel's superhero suit, are similarly top-notch. All these elaborate visual elements are a far cry from the more grounded motion pictures Captain Marvel directors Anna Boden & Ryan Fleck have helmed in the past like Sugar or Mississippi Grind. Thankfully, like recent indie movie directors turned blockbuster filmmakers like Patty Jenkins or Jon Watts, they manage to adjust to these new blockbuster movie surroundings nicely and work well behind the camera on Captain Marvel, though it is curious how the movie bears no real resemblance to their prior works as filmmakers (a far cry from how Ryan Coogler and Taika Waititi's MCU films felt like extensions of their prior filmography).

There is at least one element Captain Marvel shares with most of Boden & Fleck's prior directorial efforts, specifically that, like Sugar or Mississippi Grind, Captain Marvel is a well-made movie. The clunky opening sequences and a climax that has some elements too derivative of prior Marvel Cinematic Universe movies are heavily outweighed by the numerous parts of the production I was head over heels for. Brie Larson & Samuel L. Jackson's rapport! Lashana Lynch & Brie Larson's heartwarming dynamic! Everything with the Skrulls! A plot structure that I admire the more I think about it! A cute scene-stealing kitty named Goose! There's so much to adore in an exhilarating delight like Captain Marvel, it's no wonder I left the movie feeling like I could fly! That's certainly different than when I walked out of Fantastic Four: Rise of the Silver Surfer and felt like I could barely trudge to my car!
Posted by Douglas Laman (NerdInTheBasement) at 11:12 AM