Thirteen Lives is tedious rather than inspirational 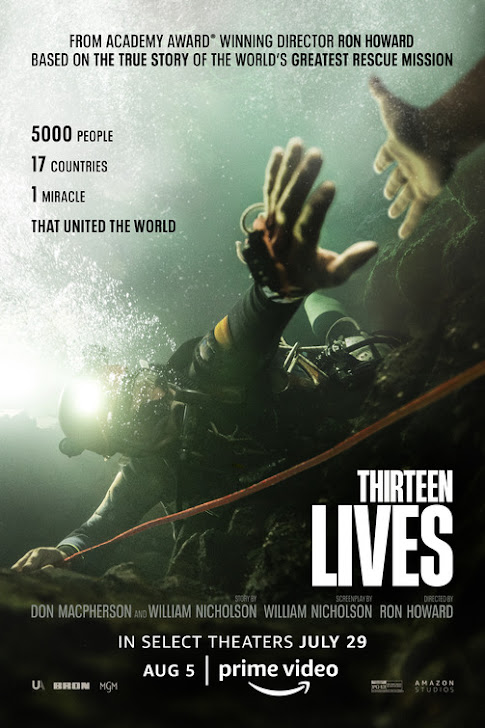 When making a movie based on a real-life event, it's important to ask what you hope to accomplish in this project. You don't have to change filmmaking forever with your efforts. However, it's important to ask what you'll accomplish that people couldn't get from a documentary or a book on your subject. This can even be something as simple as being an entertaining standalone watch, that's a perfectly reasonable reason to make a film. Many movies based on historical events, like Selma, Lincoln, or The Insider, manage to offer something unique in exploring the past. Thirteen Lives, a new Ron Howard directorial effort chronicling the 2018 Thai cave rescue mission, is, unfortunately, unable to do anything especially compelling with the harrowing material it's covering.

At the end of June 2018, 13 young boys and their football coach got trapped in the Tham Luang cave. With a monsoon arriving to flood the cave, any rescue mission to save the youngsters would be an incredibly dangerous exercise. Retrieving them will require the skills of some of the greatest deep sea cave divers in the world. This is where Richard Stanton (Viggo Mortensen) and John Volanthen (Colin Farrell) come into play. Hired by the governor to retrieve the adolescent captives, the impossible mission gets more and more preposterous every day. It's only in recruiting the aid of diver/anesthetist Richard Harris (Joel Edgerton) that a new, insane plan begins to emerge, one that may just have a shot at saving these kids.

When I say this plan is insane, that's no understatement. The eventual mission to get the kids out is to put them to sleep with anesthesia and then, to help keep them alive while underwater, jab them with tiny doses of ketamine on their journey to the entrance of the cave. On paper, it sounds ludicrous, the kind of plan that would never pass the second draft of a fictional film. Its preposterousness makes the constantly buttoned-up nature of Thirteen Lives infinitely more perplexing. Nobody is saying a narrative film recreation of the Thai cave rescue mission should have the maximalist wackiness of a Daniels movie. However, surely there was a way to juggle respect for the severity of the operation with some kind of pulse?

Whereas the vastly superior 2021 documentary The Rescue (which covered this same topic but with interviews with the actual participants of the rescue mission) eaned into the propulsive unpredictability of this entire scenario, Thirteen Lives is dead set on being as super serious as possible. This isn't so much channeling the vibes of Tony Scott or even the most intense scenes of Howard's Rush than it is a John Lee Hancock movie. William Nicholson's screenplay is here to just recite the basic facts of the rescue mission and offers little extra insight into the proceedings that could make familiar events feel fresh again. Even worse, his screenplay's penchant for ham-fisted dialogue undercuts the supposed serious tone of the movie. A somber atmosphere could've rendered this a potentially contemplative exercise, a muted examination of an event drenched in sensationalist news coverage

Unfortunately, Nicholson leaves little to the imagination in the clumsy dialogue, especially when it comes to the character of Stanton. His unintentionally comical "I don't even like kids" line in his first few minutes of screentime sets the tone for the kind of words he delivers throughout the film. There are many ways you could make a compelling movie about the Thai cave rescue, but I'm not sure reimagining one of the divers as Dr. Alan Grant from the first Jurassic Park is one of them. Nicholson's writing also struggles at juggling a large cast, with so many people just fading into the background. Potentially interesting figures and plotlines, like the detail that some of the trapped people not native citizens of this region of Thailand, gather dust in the corner. In aquatic terms, the script for Thirteen Lives is vast in its size on the surface but is only a few inches deep.

Thirteen Lives also fails to make a case for its existence on a visual level too. Scenes of our divers making their way from one cave avoid some visual effects pitfalls (they don't immediately look like they're shot on a green screen, thank goodness), but unfortunately, the underwater segments just aren't visually striking. Once you've seen one murky underwater cavern, you've seen them all, but Thirteen Lives lingers on every step of the divers and their journey, making the repetitive nature of the imagery extra apparent. Here and throughout Thirteen Lives, director Ron Howard and cinematographer Sayombhu Mukdeeprom struggle to convey any sense of urgency or tangible humanity in the imagery flickering on-screen. I was especially struck by how any scenes that depicted profound emotions of the parents of the captive kids, whether it be crying or cheering, had a sense of detachment to them. The camera is awkwardly kept at a distance here as if there were concerns that getting too close to such pronounced emotions would rob the production of its pathos.

Recurring visual problems underscore the creative struggles of Thirteen Lives. The feature isn't devoid of merits, with Farrell and Edgerton doing especially well in their respective performances. But the word "tedious" should not be coming to my mind so often when I'm watching something that's supposed to be propulsive and ultimately cheer-worthy. Worse, by the end of the film, it becomes apparent that Thirteen Lives has nothing to say about this incredible rescue mission beyond acknowledging that it happened and the two people who perished because of it. Even if the superior documentary The Rescue didn't cover this subject already, Thirteen Lives would still be a humdrum example of how to turn a historical event into a narrative feature.