The Black Phone calls up some solid entertainment 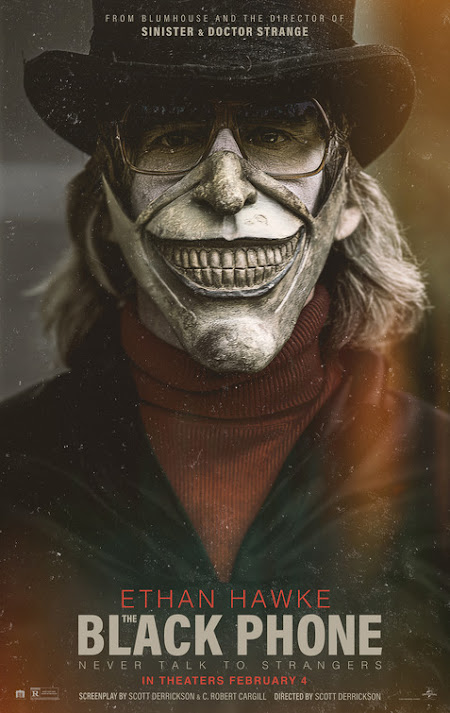 Adapted from a short story by Joe Hill, The Black Phone spends much of its first act establishing a bleak world for adolescent sibling protaganists Finney (Mason Thomas) and Gwen (Madeleine McGraw) to inhabit. This is made especially apparent in one of the most quietly tragic scenes of the whole movie, where Finney joins his sister in watching TV right after Gwen has been beaten by their father. What's flickering on the Idiot Box? An episode of Davy & Goliath. This stop-motion Christian show spoonfeeds Finney, Gwen, and countless other kids hamfisted easy morals that don't apply in a world where parents can abuse their kids without consequence or where violent bullies lurk around every corner.

The Black Phone is emphasizing that these youngsters are growing up in a world of abuse that doesn't even offer them tools to normalize their experiences. Just TV shows that instill in them the message of complying with authority, that present a warped sanitized vision of reality.

It's a bleak start for what ends up being a relatively tame (by R-rated horror standards) scary feature, but it does provide a fine groundwork for what's to come. The ensuing story sees Finney getting kidnapped by The Grabber (Ethan Hawke), a notorious local figure who has been kidnapping kids for a long time. Waking up in this man's basement, Finney is terrified about his impending demise. But a seemingly busted black phone on the wall could have the answers Finney's looking for. The spirits of The Grabber's previous victims are now calling Finney up and giving him guidance on how to fight back against this wicked man. Meanwhile, Gwen is a young girl who has dreams that serve as supernatural visions, including of those who've previously died at The Grabber's hands. She could prove helpful in figuring out where Finney is...and figuring out a way to save him before it's too late.

The Black Phone is the latest film by director Scott Derrickson, a man who's been working in horror cinema for over two decades now. In that timespan, Derrickson has shown a skill for crafting eerie images and some clever scares rooted in reality. Unfortunately, projects like The Exorcism of Emily Rose and Sinister were held back by his screenwriting and filmmaking choices that lacked subtlety. Going the obvious or over-the-top route isn't bad, but Derrickson's horror films have tended to fall prey to the wrong kind of pronounced story or character details. Plots or scares that require a bit more subtlety tend to get weighed down by intrusive scores or didactic dialogue.

Derrickson sometimes succumbs to those shortcomings again here, including indulging in too many flashback sequences and some clumsy depictions of suburban cruelty that are caricatured when they should be hauntingly raw. Luckily, the inherently restrained nature of The Black Phone's premise, which largely confines one kid to a man's basement, does keep some of these issues at bay. Any sequence depicting Finney in The Grabber's clutches also allows for Derrickson to deliver some of his most interesting visuals as a filmmaker yet. Any instance of the bodies of dead kids just wandering around an oblivious Finney (who can hear, but not see these souls) is especially chilling and memorable in terms of blocking and framing.

Those moments are made all the more engaging by the choice to have the dialogue of the kids tweaked so that it sounds drenched in static like you're hearing it from an old telephone. It's a detail that subtly reminds you you're hearing voices of the past, people who have no life left to live but do have wisdom to impart. Plus, the inherent situation Finney's trapped in is stripped-down enough, not to mention populated with reasonable obstacles (like a potential escape door jammed shut or a piece of wood breaking at an inopportune time), to feel like something grounded enough that it could really happen. Even with the supernatural presence of dead kids coaching Finney, much of what we're witnessing feels tangible enough to get you invested in wanting to see Finney get the hell out of there.

Succeeding on that front was enough to make The Black Phone a solid, though flawed, watch in my book. Ethan Hawke being around to deliver a great villain performance is just a cherry on top. Even with his face either entirely or partially covered in a mask for the entire runtime, Hawke still conveys an eerie aura that puts you on edge. It's a testament to his gifts as a physical actor that he can still convey genuine menace even with key parts of his body all covered up. As for the adolescent performers, Madeleine McGraw is easily the standout. It's a testament to her range that she gets the most emotionally devastating moment of The Black Phone (captured in a single take to boot) and then, later on, delivers the best comedic line of the film in one of her conversations with Jesus Christ.

It's easy to imagine The Black Phone living up to its full potential as a horror movie if its scope were narrowed (limiting the film to just The Grabber's basement would've been fascinating) and if recurring tendencies towards super conspicuous details had been eschewed. The Black Phone isn't the next horror classic, but it functions just fine as an enjoyable watch that mostly delivers the goods as a survival drama and as a showcase for Ethan Hawke's talents as an actor. I also must give this motion picture props for being a straightforward serious horror movie that features a villain called The Grabber. That's commitment right there.