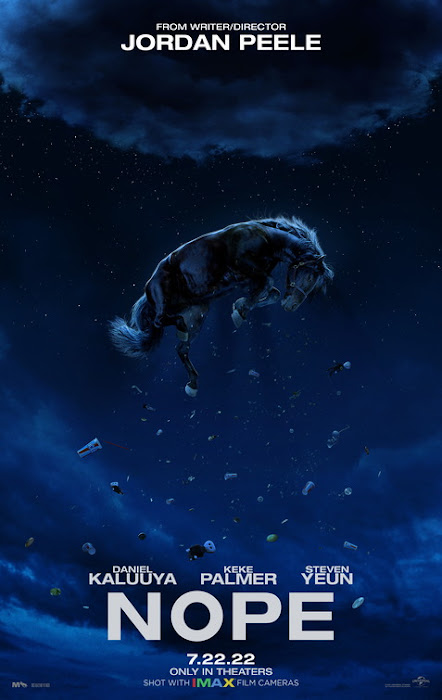 There will come a day when writer/director Jordan Peele helms a dud. It's bound to happen. Every filmmaker has a movie that just doesn't work. Steven Spielberg has Indiana Jones and the Temple of Doom. David Fincher has The Curious Case of Benjamin Button. Gore Verbinski's got The Lone Ranger. Direct enough movies, one' s bound to not click. The director of Get Out and Us will doubtlessly helm such a production in the future. Thankfully, his third directorial effort, Nope, is not that feature. Instead, it's another affirmation of Peele's gifts as a filmmaker and a signal that he can expand his scope as a storyteller without sacrificing substance for scale.

OJ Haywood (Daniel Kaluuya) runs a ranch for horses, which are used in various entertainment properties (ranging from commercials to The Scorpion King). This domicile has belonged to his family for years, but after the sudden death of his father, who supposedly died after getting hit with debris from an airplane, getting reminded of the past feels more like a burden than a gift to OJ. Feeling adrift, some direction comes into his life when, whilst tending to his horses one night, OJ spies...something moving in the sky. His sister, Emerald (Keke Palmer), happily jumps into OJ's plan to film whatever's out there. This could be it, a chance to solve their money problems and maybe get some answers about what thing killed their father.

By Monday morning, I'm sure there'll be dozens of essays floating around about the various underlying meanings of Nope. I'm probably a few tools shy of a full toolbox to get everything Peele's going for here, but one notable theme of the movie that did stick out to me was the kind of entertainment figures it focuses on. The famous movie stars or filmmakers of many features about Hollywood are largely absent here. Our characters are largely below-the-line workers, like cinematographer Antlers Holst (Michael Wincott), or figures on the fringe of notoriety, like child-star-turned-theme-park-owner Ricky "Jupe" Park (Steven Yeun).

These are more relatable grunts just trying to earn a day's living, much like the majority of the people who're going to see this movie (or even yours truly!). This makes them the perfect underdog figures to contrast with something much larger-than-life hovering in the clouds. Their references to and engagement with pop culture are also fun and reflect how they're a bit more at the bottom wrung of the entertainment industry totem pole. Rather than name-dropping the biggest movies of 2019 and 2020, characters bemoan "a pilot for The CW" while a poster on Park's wall is a homage to Holes. These clever details reinforce the lack of mega-star wattage that the characters of Nope engage with and they also give a specific identity to the movie's relationship to the broader world of entertainment. Where else this year will you find a blockbuster that has a character waxing poetic on the virtues of Chris Kattan?

The fact that you can unpack that much simply from the kinds of movies and TV shows Nope name-drops is a testament to how layered this motion picture is. There's a similar level of profound detail in the visuals, which are brought to life through cinematography by Hoyte van Hoytema. It shouldn't be a shock that a film combining the might of Peele and van Hoytema with IMAX cameras is going to look great, but it's still tremendous to watch the beauty of Nope's images unfold. There's a fun sense of theatricality to the film's depiction of a possible UFO lurking in the shadows that harken back to how the dinosaurs were portrayed in Jurassic Park or the depiction of the shark in Jaws. You see a little bit of it here, a little bit of it over there, all building up suspense and making you question what you did see.

It's an exquisite mixture of thoughtful filmmaking and pure unfiltered fun. There's an outright cheeky quality to some of the visuals that wring as many whispers of "no no no" from viewers as possible. That's the kind of controlled camerawork that informs so much of the entertainment in the delightfully squirm-inducing suspense sequences of Nope, the best of which will ensure you won't go into a barn or look at a cloud the same way ever again. Come to think of it, the underlying rascally tone of such moments is a key reason why Nope can alternate between horror and comedy so gracefully. The two genres have often been unexpected but welcome bedfellows throughout cinema history and they make a fine pairing here. The jokes in Peele's script are quite funny, but they also feel like an organic companion to the vibes of certain scary scenes. Turns out, you can have your cake and eat it too, or in this case, have jokes and also be intense enough to make audiences member dig their nails into the armrests of their seats.

Nope's assorted performances are just as well-realized as its sublime tone, with Daniel Kaluuya delivering especially terrific work as OJ. Here's to hoping Kaluuya becomes the Toshiro Mifune to Peele's Akira Kurosawa, as the duo just seem to bring out the best in one another. In the other lead role, Keke Palmer is endlessly compelling as Emerald, she just exudes such effortless confidence from the moment she walks on-screen, while we should all be hailing the welcome return of character actor Michael Wincott in his first credited acting role in seven years. Just listening to him talk in that wonderfully gravelly voice is great, but his physical presence is also fantastic. Steven Yeun, though, especially stands out in his supporting role as Park. Yeun's natural charisma works as such an interesting contrast with this man's internal life and helps inform one of Nope's most fascinating players.

There's lots to love about Nope, which thoroughly delivers both brains and entertainment. But what draws me to it is how much it defies traditional Hollywood logic. They say IMAX cameras are merely for movies that cost $250 million and span multiple continents, yet here they are effectively used on something with a much more intimate storytelling scale. They say combining Westerns and science-fiction is a fool's errand, but here Peele mixes the two genres to incredible effect. A movie that critiques spectacle shouldn't also dazzle the eyeballs, but Nope does just that. One could even say the storytelling structure, which often bounces between perspectives and briefly shifts across time, should be convoluted, yet it's pulled off here with grace. Like so many other enjoyable movies, Nope looks at what logically shouldn't work and runs in that direction. So long as he keeps following those sorts of creative instincts, maybe Peele won't be delivering that directorial effort dud anytime soon.