The Gray Man is more forgettable than anything else 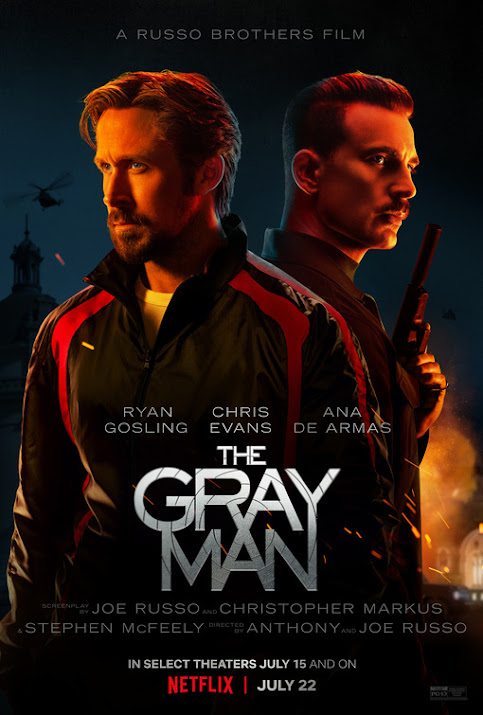 If there's anything positive to say about The Gray Man, it's that directors Anthony and Joe Russo feel much more comfortable here as filmmakers than they did in their last directorial effort, Cherry. With a quartet of Marvel Cinematic Universe movies under their belt, The Russo Brothers are understandably a lot more at home handling a global action film like The Gray Man, an adaptation of Mark Greaney's novel of the same name, than whatever the hell Cherry was trying to be. But the same familiarity that seems to make the Russo's at ease as directors also makes it hard to get invested in The Gray Man as a movie. The whole thing struggles to emerge from the shadows of superior blockbusters it keeps evoking.

Court Gentry (Ryan Gosling) was once resigned to live out his lengthy prison sentence when CIA agent Donald Fitzroy (Billy Bob Thornton) came to him with a proposition. Gentry could become a mercenary for the CIA named Sierra Six, a job that would allow this prisoner to put his experience with violence to good use. Cut to two decades later and Gentry has become one of the best and most efficient assets in the CIA. During a seemingly routine mission, Gentry realizes other members of the Sierra program are getting killed off and that he can't trust his superiors. Armed with an important flash drive, Gentry is now a man on the run. The sociopathic Lloyd Hansen (Chris Evans) is sent to kill Sierra Six in a chase that will span the globe and eventually involve Fitzroy's granddaughter, Claire (Julia Butters).

Throughout The Gray Man, I was just as rarely bored with what I was watching as I was engaged. There's little to repel you in this feature, but there's also little that'll sink its claws into you and never let go. I kept waiting for an extra flourish, a really ludicrous plot twist or a distinctive trait in the performances, to take things from simulating the idea of entertainment to being entertaining. No such luck. There are certainly worse movies out there and there's no denying that The Gray Man is largely competent on a technical level. But there's not much of a soul here. Instead, the crux of The Gray Man is borrowed from a barrage of other movies, whether it's having a bad-ass assassin lead character with a soft spot for a child or a bunch of generic CIA goons ripped straight out of a Bourne installment.

The whole movie would've been better off with just a dash more fun or steaminess. The Gray Man operates in a harsh world, one where the enjoyably ludicrous parts of the spy genre, not to mention any semblance of romance, have been stripped away. Everybody's brooding, including the audience! The result is a movie that's got gunfire to spare, but little humanity or zest. It can't even commit fully to its darker qualities thanks to a PG-13 rating that ensures, among other shortcomings, audiences can't get the kind of exciting death scenes that automatically made movies like Dead Calm or Deep Blue Sea enjoyable rides. It's baffling to imagine why a streaming movie isn't just rated R, anyway. You don't have to worry about alienating teen moviegoers on Netflix, anyone can watch it, and they won't get carded by movie theater employees. Just go for the more brutal rating so The Gray Man could occasionally get spiced up with some gnarly deaths.

But even a couple of head explosions wouldn't have helped the awkward narrative structure of The Gray Man, which is especially confounding in its saggy second act where a pair of abrupt flashback sequences derail any plot momentum. Even worse than all of that, though, is how The Gray Man utterly wastes leading man Ryan Gosling. Gosling is an actor with a wide sense of range who can do goofy physical comedy in The Nice Guys one minute before doing a restrained portrait of torment in First Man. Unfortunately, The Gray Man doesn't give him much of anything to work with. Gentry's a blank slate of a character and Gosling is never given any opportunities to fill in the blank spaces with a vibrant personality. The character's recurring quips even feel like a poor use of Gosling's skills as a comedic performer.

Most of the cast members of The Gray Man are on this kind of autopilot, though Dhanush does deliver a charismatic supporting turn while main baddie actor Chris Evans seems to be having a ball channeling John Lithgow in Cliffhanger in portraying a dastardly foe to the core (though he sometimes feels like he's in the wrong movie). Mostly, though, these forgettable performances encapsulate the similarly disposable nature of The Gray Man. Henry Jackman's generic score and a collection of mostly forgettable foreign locales similarly ensure that this expansive blockbuster won't linger in your mind for long. There are enough explosions and instances of decent fight choreography (the latter detail undercut by some terrible editing) to likely make some action fans pleased in the moment while watching The Gray Man, but even they'll be wishing the movie had tried for something more compelling by the time the credits begin rolling.