Mrs. Harris Goes to Paris is an agreeably pleasant trip 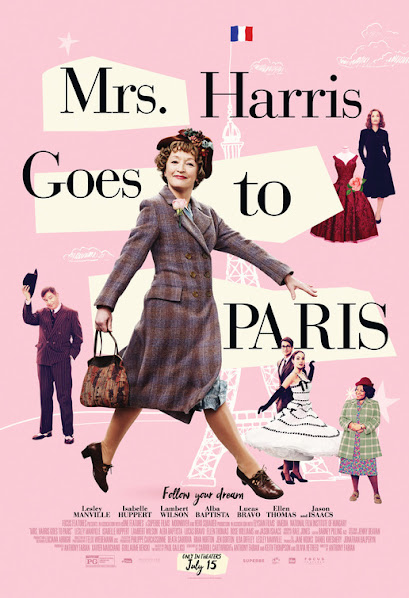 Based on the novel of the same name by Paul Gallico, Mrs. Harris Goes to Paris is such a gentle movie that it makes something like Downton Abbey look like a Takashi Miike movie. That's not a bad thing (certainly Paris is better overall than both of the Abbey films), but it's good to know what you're getting into with this movie. It's a soothing feature designed from the ground up to not offend grandparents, right down to it garnering a PG rating. Again, this is not a criticism, since Mrs. Harris Goes to Paris, despite being too fluffy for its own good, is an agreeable enterprise that gets a lot of mileage out of its lead performer.

Mrs. Harris (Lesley Manville) has spent decades working as a cleaning lady in London. She's saved every pound and shilling, all without ever clinging to any dream bigger than hoping that maybe her husband, who went missing fighting in World War II, may still come home. After an encounter with a Christian Dior dress at one of her client's houses, though, Mrs. Harris has a new ambition. She's going to Paris, France to get the snazziest dress imaginable. The wall-to-wall elegance of the Christian, Dior headquarters is initially anything but welcoming to Mrs. Harris, particularly powerful employee Claudine Colbert (Isabelle Huppert). But this spunky and encouraging soul is not one to give up easily on anything, least of all her dreams.

Mrs. Harris Goes to Paris kept reminding me of Paddington. How could it not? They're both sweet yarns about British-accented people with hearts of gold struggling to fit in while exploring a new culture. Paris can't even hope to hit the heights of quality reached by the two Paddington features, but there are worse movies to evoke. The constant kindness present in Mrs. Harris's spirit proves to be an endearing enough quality to hang her French escapades on, especially since the screenplay (credited to director Anthony Fabian as well as Carroll Cartwright, Keith Thompson, and Olivia Hetreed) makes it clear there is no ulterior motive fueling all these acts of emotional generosity. Harris behaves like this because that's just who Harris is.

Such a personality is brought to life through Lesley Manville, who's really the reason to see Mrs. Harris Goes to Paris. A fixture of Mike Leigh movies and having earned an Oscar nomination for going toe-to-toe with Daniel Day-Lewis in Phantom Thread, Manville adds another superb film acting credit to her resume here. Much like with Denzel Washington in The Preacher's Wife, Manville injects substantive pathos into a script that could've lapsed into an avalanche of treacly sentiment. Mrs. Harris isn't a caricature in this woman's hands. Instead, she conveys realistic flourishes in her body language and dialogue deliveries. The result is a compelling performance that ensures Mrs. Harris feels about as real as somebody sitting next to you in the theater.

Other aspects of Mrs. Harris Goes to Paris, though, never quite reach the heights of Manville's central performance. Fabian's direction, for one thing, isn't terribly imaginative. The closest thing to super memorable camerawork here is the use of double dolly shots whenever Mrs. Harris is getting especially enamored with a dress. Aside from that, the streets of Paris, France in the 1950s have somehow failed to inspire much visual bombast in this filmmaker's eyes. The script could've also stood to inject extra doses of personality into key supporting characters like noble but bland numbers guy Andre Fauvel (Lucas Bravo). The moving moments of Mrs. Harris Goes to Paris work more often than they don't. However, these moments would be extra poignant if the people Mrs, Harris encountered in Paris were as detailed and believable as the film's lead character.

Throughout Mrs. Harris Goes to Paris, Mrs. Harris, as well as protesting garbagemen in a recurring subplot, challenges societal norms and expectations over where a cleaning lady from London belongs. The film she anchors, though, is less accustomed to subversion. There aren't many surprises in here to elevate the feature, but maybe that'll be just fine with the target audience for this motion picture. You still get to see lots of pretty dresses, experience your heartstrings getting tugged, and another killer Lesley Manville performance. Mrs. Harris Goes to Paris had the potential to be exceptional rather than just pleasant, but as Mrs. Harris herself is always proving, there's nothing wrong with a little bit of niceness.