Hallelujah: Leonard Cohen, A Journey, A Song shines in its most introspective moments 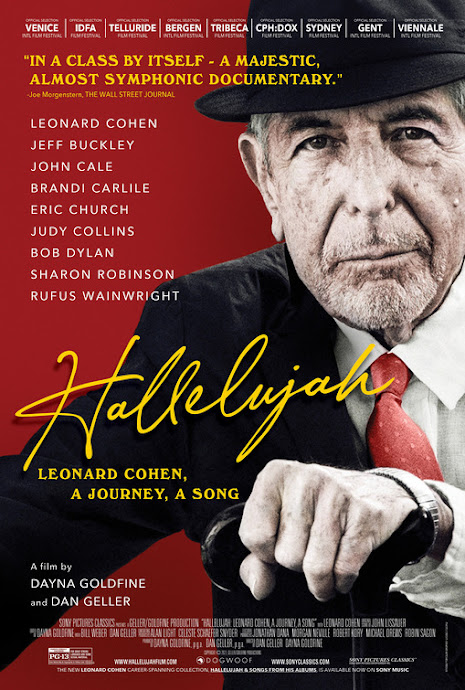 No piece of art solely belongs to the people who make it. When we look at and experience a painting, film, statue, or any other form of artistic expression, it also becomes a part of us in some way. This is especially true of music, which is devoid of a visual form and often features abstract lyrics or orchestral accompaniment that invites the listener to make their own interpretation of what they're digesting. It's why songs so often become more than just tunes on the radio. They become the soundtrack to a first date, a coping mechanism during a breakup, an anthem during a karaoke session you'll never forget. Even a chart-topping hit can feel like something that was designed for you and your circumstances.

Part of the focus of the documentary Hallelujah: Leonard Cohen, A Journey, A Song is on how the titular tune, "Hallelujah," has managed to resonate so deeply with so many different people. But that's not the only focus here, as directors Dan Geller and Dayna Goldfine use this film as an opportunity to explore a chronological look at Cohen's life. This portrait of this musician's existence allows for the greater context of "Hallelujah's" very existence to come to light, particularly how it was initially never given a proper release in the U.S. by Columbia Records. While we get to dive into the finer points of this man's career, the second half of Hallelujah then splinters into exploring the various covers of that famous song and how they extended the lifespan of what once looked like a piece of music headed for the trashbin of history.

The latter scenes of the film provide some of the most insightful parts of Hallelujah: Leonard Cohen, A Journey, A Song. That's not a slam on the archival interview segments we hear from Cohen or his backstory. It's just compelling to hear how musicians read into "Hallelujah" concepts or ideas that Cohen himself could never have imagined being a part of this tune. Brandi Carlile, for instance, observes in an interview how the song helped her come to terms with her queerness while the tragic passing of Jeff Buckley, who sang a famous cover of "Hallelujah," injected further unexpected layers of poignancy into a piece already rich with subtext.

Through these anecdotes and perspectives, we can see the full impact of "Hallelujah" as well as how even the most deeply personal works of art can end up resonating with other humans. There is a bit of tragedy too in the film's depiction of its ubiquity. Shrek director Vickey Jensen mentions in an interview that, so it could be featured in an animated title aimed at kids, she edited together a new version removing lyrics dealing with sexual material. That's not a bad idea when you want to use this song in a PG-film, but Jensen goes on to note that that's the default version that's been performed by other people since then. Shrek gave "Hallelujah" a gargantuan amount of notoriety, but it also came at the cost of removing some of its most challenging and vulnerable passages. With this development, everybody knows Cohen's song, but they don't know the most revealing parts of Cohen's lyrics.

Exploring the benefits and drawbacks of "Halleluljah" becoming such an iconic track is where Hallelujah: Leonard Cohen, A Journey, A Song really thrives. The talking head interview segments and sequences dedicated to chronicling the backstory of Cohen are serviceable, but boilerplate for a music documentary like this. Cohen was always pushing the boundaries in his work with that gravelly but also the weighty voice of his. This makes it a shame that a movie dedicated to his work isn't quite as groundbreaking in its form and presentation as its central subject. Geller and Goldfine still execute these parts of the production with competency and do include a wide range of interview subjects, including the bewildering presence of country music superstar Eric Church.

Most thoughtful of all in their filmmaking is the smart decision to not linger on the death of Cohen. The films end with on-screen text referencing his passing in 2016, but Hallelujah: Leonard Cohen, A Journey, A Song isn't built around the climactic reveal that he's died. This is a film largely about how songs and the musicians who write them can live on and on forever. As long as people are performing "Hallelujah" on TV singing competition shows, Cohen, in some small way, won't really be gone. Even more importantly, the impact this song had on people, made evident all throughout this documentary, ensures that the legacy of Cohen will be an eternal one. No piece of art solely belongs to the person who makes it and "Hallelujah" owes every shred of its popularity to that truth.