DC League of Super-Pets isn't super, but it is frequently amusing 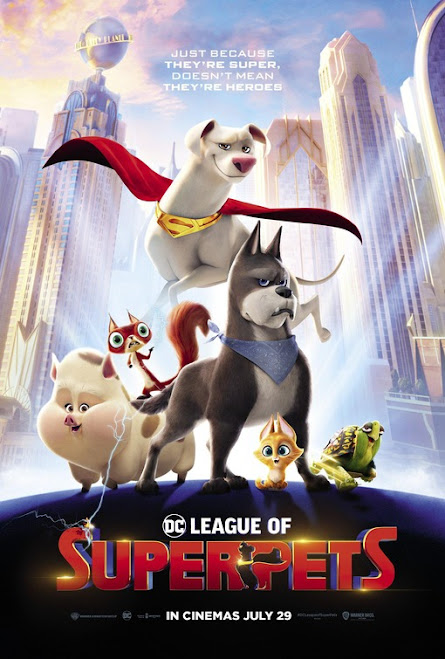 The big screen adaptations of DC Comics properties have garnered a reputation for being too serious, sometimes for good reason. But in the last few years, the DC films have pushed back against that perception not only with lighter live-action fare (like Shazam! or The Suicide Squad) but also through animated kid's movies. These youth-skewing features, such as The LEGO Batman Movie or Teen Titans Go! To The Movies, haven't been afraid to be either silly or explore the most obscure corners of the DC mythology. DC League of Super-Pets is the latest reinterpretation of the world of Superman and Batman for the kids these days. The gimmick this time is that the story is told through the eyes of a bunch of super-powered pets, many of whom have been around in the comics for decades.

Everyone needs a cuddly pet, even Superman (John Krasinski), who has canine Krypto (Dwayne Johnson) as his loyal pal. In fact, he may be too loyal. Krypto can't imagine being anything but the only person that matters in Superman's life, even as this superhero prepares to pop the question to Lois Lane (Olivia Wilde). This dog's life is already ruff, er, rough, grappling with this change in his domestic life, not to mention his inability to socially interact with other pooches.

Things get even more precarious once an evil plan by Lex Luthor (Marc Maron) ends up endowing superpowers on the vengeful guinea pig Lulu (Kate McKinnon). She proceeds to defeat and imprison the Justice League, leaving the fate of humanity in the hands of Krypto. To quote the poster for Justice League, though, "you can't save the world alone." Krypto will need to rely on the help of a gaggle of shelter pets who've just been given superpowers, including the Boxer Ace (Kevin Hart), pig PB (Vanessa Bayer), red squirrel Chip (Diego Luna), and elderly turtle Merton (Natasha Lyonne).

Though they couldn't be farther apart in terms of the audiences they're aiming at, DC League of Super-Pets happily reminded me of the excellent new Harley Quinn TV show in terms of its style of humor. Much like that (undeniably vastly superior) small-screen program, Super-Pets is here to deliver a comical vision of the DC universe, but also one infused with an apparent love for the material it's skewering. Just look at an exciting early set piece of the Justice League working together to foil Luthor, which radiates with infectious enthusiasm rather than contempt for the characters on-screen. One gets the sense that screenwriters Jared Stern and John Whittington (the former artist also directs) had been waiting years for somebody to deliver a movie where Green Lantern and Wonder Woman fought side-by-side and are now relishing the opportunity to deliver such imagery.

Stern and Whittington's writing isn't just good for delivering the kind of Justice League action two separate live-action movies couldn't quite conjure up. Their sense of humor also proves entertaining more often than not since, thanks to them leaning into the inherent preposterousness of the DC universe, it tends to skew towards the ridiculous. Cats can hack up hairballs that are actually functioning grenades, while Krypto daydreams about tossing Lane into the farthest reaches of the ocean. The best of these gags is anything revolving around the elderly and absurd Merton. Lyonne opts to voice the critter like the turtle version of Abraham Simpson (all the character's missing is an onion on her belt). Her non-sequiturs and various asides are often hysterical, especially a running gag where Merton is flirting with a series of hard hats.

Of course, just as Superman has Kryptonite and Green Lantern has the color yellow, the fatal weakness of DC League of Super-Pets is being derivative of other animated kid's movies. The worst offender of the film leaning onto other features come in the third act when a key character's backstory gets revolved in a flashback sequence that may as well have the words "WHEN SHE LOVED ME" flashing in bright red letters on-screen. Meanwhile, a key part of Krypto's character arc feels entirely lifted from The LEGO Batman Movie, the personal struggles of each of the shelter pets have been seen in countless other movies, pets while the presence of an army of superpowered destructive guinea pigs echoes this year's The Bad Guys. DC League of Super-Pets is an amusing diversion, but it could've been as hysterical and memorable as Teen Titans Go! To The Movies if it had been willing to be less familiar.

It also wouldn't have hurt if the feature's computer animation was better. DC League of Super-Pets was animated by Animal Logic, an animation house that Warner Bros. has regularly utilized for nearly two decades. Their past fully-animated projects have included Happy Feet, Legend of the Guardians: The Owls of Ga'Hoole, and the LEGO movies, all of which involve either realistic-looking characters or textures. They're way less experienced with stylized material, and it, unfortunately, shows in Super-Pets. Human characters like Batman and Superman, with their wonky designs, never look quite right, while textures like water and fire register as feeling off. Measures taken to cut costs on the animation, namely making the streets of Metropolis often downright deserted, also prove distracting. While many of the animal characters look fine, they deserved an animation style worthy of being dubbed "super".

If the folks behind DC League of Super-Pets had shown a willingness to deliver bolder animation or be less derivative of other animated movies, it still wouldn't have been as good as The LEGO Batman Movie. Still, it could've lived up to more of its potential. The final product struggles to carve out its own identity in many respects, including with a lead vocal turn from Dwayne Johnson that just sounds like Dwayne Johnson speaking into a microphone.

Luckily, there are enough humorous gags, lively supporting performances, and infectious affection for DC Comics lore in League of Super-Pets to keep most adult audience members pleased. As Adam West showed decades ago, the world of DC superheroes is ripe for comedic reinterpretations and the best moments of this film reaffirm that potential. Plus, kids will doubtlessly go gaga for a movie that dares to combine The Secret Life of Pets with The Avengers. No doubt this will hit the sweet spot for enough of its target demo to spawn a sequel or two. I could imagine worse animated movies to inspire follow-ups. Certainly, none of the Sing installments, for instance, have as fun of a character as Merton. Maybe next time around Supergirl's horse Comet can join in on the fun.