The Bad Guys isn't too shabby as a family comedy 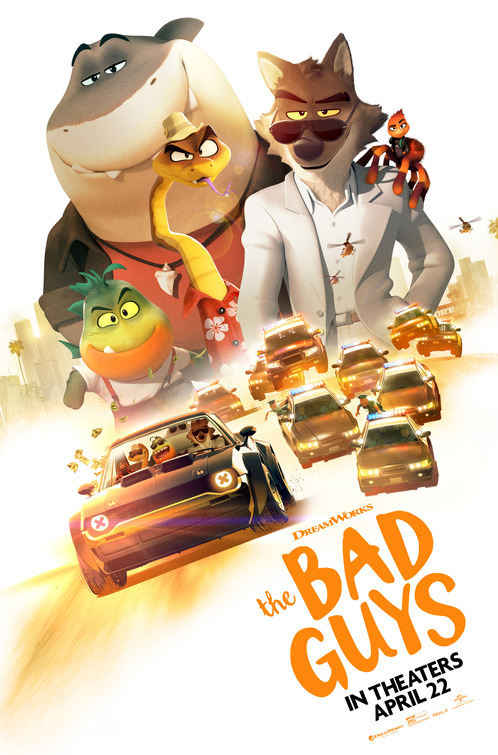 DreamWorks Animation has now produced 42 feature-length movies. For me at least, it's easy to forget that considering how many sequels the studio has produced over the year that tend to blur together. But over the course of 24 years, the outfit founded by Jeffrey Katzenberg has managed to produce a lot of different films, all of varying degrees of quality. Unsurprisingly, when you make this many features, you're inevitably going to produce a Shrek the Third for every How to Train Your Dragon. The Bad Guys is one of the more pleasant entries in the DreamWorks canon. Kids are bound to love it, parents will find themselves nodding along and having a fun time. It doesn't transcend its limitations, but it's a lot more spry and confident than the worst DreamWorks fare.

Based on a series of children's books by Aaron Blabey, The Bad Guys is named after a group of animal criminals led by Mr. Wolf (Sam Rockwell). He and accomplices Mr. Snake (Marc Maron), Ms. Tarantula (Awkwafina), Mr. Piranha (Anthony Ramos), and Mr. Shark (Craig Robinson) gleefully pull of an assortment of bank robberies and other ne'er-do-well deeds. They break the rules because, hey, the world always see's them as scary animals with pointy teeth, why not live large and rebellious? When a heist goes wrong, though, the group decides to follow a training plan to go "good" as part of an elaborate plot concocted by Mr. Wolf. However, the group's ringleader may be starting to get attached to the idea of helping people rather than just stealing from them...

The Bad Guys rarely surprises, but it also rarely offends or bores you. There's a welcome zip to the proceedings that keeps the story from dragging, while the animation especially comes in handy in making things entertaining more often than not. The extremely stylized character designs and movements simultaneously evoke Lupin the Third and Spider-Man: Into the Spider-Verse, both to enjoyable degrees. Rendering bursts of smoke, water, or other similar materials in hand-drawn animation is a fun touch. The assorted action sequences are also well-realized, with speedy camerawork and coherent editing giving the various skirmishes and car chases plenty of pep without devolving into shaky-cam nonsense.

Narratively, The Bad Guys is a lot wobblier, though it's still relatively solid. The idea here is to utilize the tone of a heist movie while Etan Cohen's screenplay also employs dialogue clearly channeling the verbiage of a Quentin Tarantino or Guy Ritchie film. The moments where it commits to being dialogue-driven, like in a fun opening scene captured in an extended single-take, have a unique laidback energy compared to most other American animated movies aimed at youngsters. Meanwhile, the more absurdist gags, like Mr. Shark's inexplicably convincing slipshod disguises, had me cackling. Such jokes are good for the voice actors, who have fun with their rebellious roles. Marc Maron turns out to be the highlight as Mr. Snake, with this veteran podcaster wisely playing the role in the exact same manner as if he was playing a live-action human in a feature aimed exclusively at grown-ups. Juxtaposing that with a cartoony snake has a lot of mileage in terms of humor.

With all these charming elements bouncing around, it may be puzzling to think that The Bad Guys isn't some kind of DreamWorks classic like Kung Fu Panda or How to Train Your Dragon. Unfortunately, it's kept from that stature by some critical shortcomings, namely a third act that gets too big for its own good. The fun heist movie elements get swapped out for a much more conventional big-scale blowout involving science-fiction elements that never feel at home in the story. Meanwhile, making Mr. Wolf and Mr. Snake's friendship the core crux of the story often leaves the other three members of the titular group out in the cold. The Bad Guys also suffers from a common modern kids movie problem of thinking that characters speaking schmaltzy didactic dialogue about their sad past or lessons they've learned will automatically generate pathos on par with the opening scene of Up. It didn't work for The LEGO Ninjago Movie and it doesn't work here.

More predictable sources of humor, like running gags about how a meteorite is shaped like a butt or Mr. Piranha's tendency to pass gas when he's nervous, also provide more eyerolls than giggles. The Bad Guys can't help itself in indulging in some bad habits of modern animated kids fare. Thankfully, there's enough in here that does go right to ensure it doesn't sink on the basis of those flaws. The Bad Guys will almost certainly work wonders for youngsters, but adults may be surprised to score more imaginative animation and entertaining homages to classic heist movies than expected. It won't be topping any rankings of the DreamWorks Animation canon anytime soon, but there's cheeky fun to be had with The Bad Guys.