The Northman is a rousing tragic Viking yarn 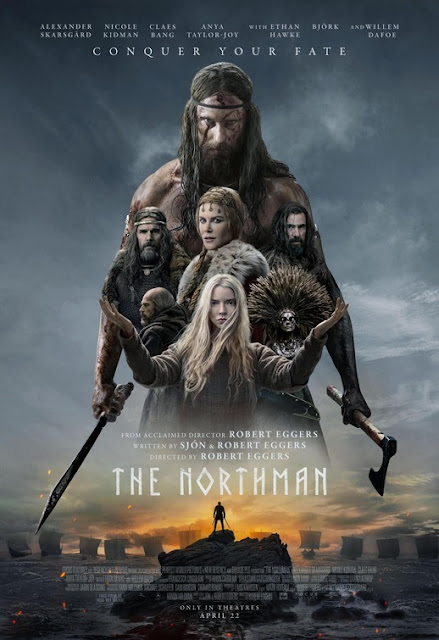 The Northman doesn’t so much immerse viewers into the world of Vikings as it does plunge you into this domain. There is no narration nor is there outsider character to serve as an audience point of view figure. Director Robert Eggers hits the ground running with a movie that embodies all the carnage, grime, and brutality you associate with Vikings and never lets up. The result of this commitment is a film that isn’t quite  as good as last Eggers efforts like The Lighthouse and The VVItch. Of course, few movies rise to the quality of those two features and The Northman proves plenty hearty in its own right.

When Amleth was a boy, he was a happy child set to inherit the throne of King Aurvandill War-Raven (Ethan Hawke). His life would be upended when his uncle Fjölnir (Claes Bang) killed Aurvandill and dispatched his man to kill his child. Amleth managed to escape and since then has grown into Alexander Skarsgard and a remorseless Viking. When he finally spots a chance to take revenge on Fjölnir, he disguises himself as a slave and hitches a ride of a slave vessel. Also aboard this ship? Olga (Anya Taylor-Joy), a sorceress who may be key in helping Amleth secure the revenge that his entire existence is based on.

Switching from the confines of low-budget A24 movies to a more expansive canvas with The Northman has, thankfully, not stifled the creative inclinations of Robert Eggers. An early scene of father/son bonding where Aurvandill and Amleth, without warning, begin romping around an underground ceremonial chamber like dogs should ease concerns that a greater budget will mean less unorthodox storytelling from Eggers (who wrote the screenplay alongside Sjón). This is still very much a movie from the guy who made The Lighthouse, he's just not filming this particular story in the Academy aspect ratio or with a largely monochromatic color palette.

With a quest for vengeance evocative of similar pursuits of revenge enacted by mythological figures like Charles Bronson and Liam Neeson, The Northman has a solid storytelling foundation for all kinds of compelling spectacle. Several grisly sequences of Viking mayhem are captured in impressively-realized one-take shots. In the highest compliment possible to these scenes, it took me a moment into watching these set pieces before I recognized the lack of cuts. Eggers and editor Louise Ford prove that effective in their execution of all the axe-throwing and muddy mayhem that only Vikings could exact on unsuspecting villages.

Though there's tons of gnarly bone-crunching carnage in here, The Northman is not a source of hollow violence.  Much like the William Shakespeare play that the original Scandinavian mythological figure Amleth would inspire, this new Robert Eggers directorial vehicle is very much a cautionary tale of the various ways self-serving violence eats at your soul and never goes according to plan. This isn't even limited to Amleth, as it's revealed early on that even Fjölnir's assassination attempt to secure the throne was eventually riddled with unforeseen issues. The characters of The Northman are so dead-set on selfish endeavors that inevitably blow up in their faces it might as well be an entire season of Succession sans Cousin Greg.

Emphasizing this quality lends an aura of vicissitude to the entire production, one seeped in the notion of lives physically and spiritually lost to all-consuming lust for vengeance. This concept is often at the forefront of the gorgeous visuals in The Northman, as is a fittingly unsettling air. Speaking of remarkable imagery, cinematographer Jarin Blaschke lends a majestic quality to the images, an element largely informed by the great environments across Ireland that this feature was shot against. Blaschke makes especially great use of contrasting colors in the nighttime and daytime scenes. The former sequences lean heavily on greys and muted colors, appropriate since this is when Amleth tends to pursue his revenge. When the sun is out, though, bright greens and blues dominate the frame. How great that The Northman doesn't see a grim tone and vivid hues as mutually exclusive entities.

As for the actors inhabiting all those pretty visuals, they're a talented bunch who work quite well within the unique confines of a Robert Eggers movie. Alexander Skarsgard certainly looks the part of a brutish Viking driven by vengeance, but he also proves effective enough at non-verbal acting to make this one of his best performances in his filmography. Anya Taylor-Joy and Nicole Kidman, thankfully, get quite a bit to do in a movie that could've easily left women behind. Most surprising, in a good way, is Claes Bang as Fjölnir. Both Bang and the screenplay opt to portray Fjölnir as a cunning evil man, but also not a caricature. We get to see him as just being a quiet father, working alongside his slaves, expressing genuine remorse for people he's lost. There's nuances to the character that nicely reflect how the world's a lot more complicated than Amleth's one-track mind might realize. Such intricacies are well-handled in the hands of Bang.

The Northman has its share of shortcomings, to be sure, including some oddly didactic dialogue, a handful of weird pieces of wonky green-screen work, and a disappointing lack of dongs. But it's otherwise another strong effort from Robert Eggers that manages to explore the fascinating recurring themes of his work (class disparity and the primal nature of man, chiefly) while exploring a wider canvas than ever before. The Northman looks just outstanding on the big screen and makes 137 minutes fly right by. Even if you don't necessarily pick up on its deeper thematic or subtle filmmaking touches, The Northman will still work excellently at plunging you into a relentlessly brutal world.

Posted by Douglas Laman (NerdInTheBasement) at 10:35 AM