Downton Abbey: A New Era is what you'd expect, for better and for worse 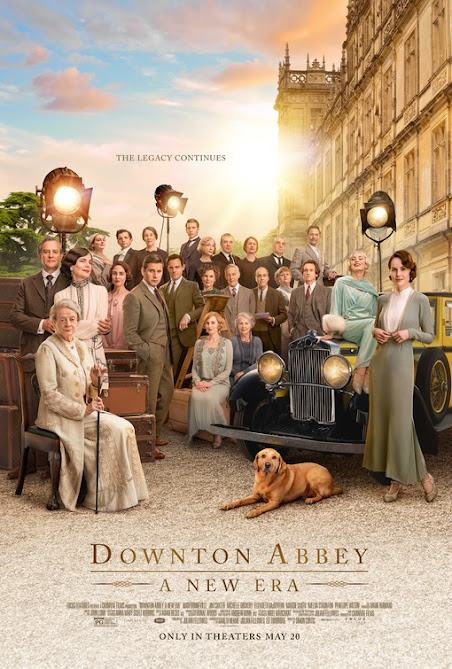 Grab your monocles and teapots, the Downton Abbey gang is back! The 2019 film Downton Abbey proved to be a lucrative enough enterprise to ensure that a sequel was inevitable. Now the whole gang's back, from the servants to the countess's and everyone in between. A review of this sequel can be summed up aptly by saying that if you liked the first movie, this one's bound to tickle your fancy. If the original Downton Abbey wasn't your cup of tea, well, this sequel won't change your mind. This is not a follow-up looking to convert the uninitiated or use the goodwill of its predecessor to try out some bold new ideas. Downton Abbey: A New Era is all too content to go down a familiar path, which will probably suit Downton Abbey devotees just fine.

Downton Abbey: A New Era, like its predecessor and the TV show that spawned both projects, concerns the residents of the titular estate, which consist of rich aristocrats and their servants. In this adventure, the residents of Downton Abbey are in a bit of a bind. For one thing, it's been revealed that the family has been bestowed a villa in the South of France from an ex-lover of Violet Crawley (Maggie Smith). For another, the dire state of the estate's roof has led to Lady Mary (Michelle Dockery) opting to accept a proposal from movie director Jack Barber (Hugh Dancy) to film a motion picture at Downton Abbey. These developments send the plot off in two directions; Robert Crawler (Hugh Bonneville) leads one group to Franca to explore the villa while most of the servants and Lady Mary get into shenanigans with the cast and crew of a movie.

The easy critique of any movie adapted from a TV show is to say that it just feels like an extended version of a regular episode. Sometimes, though, easy critiques cannot be avoided and Downton Abbey: A New Era certainly suffers from an episodic feel. Having the individual subplots be worlds away, both physically and thematically, just makes this movie feel like two separate Downton Abbey installments mushed together. This wouldn't be so much of a problem if the resulting concoction was especially entertaining, but unfortunately, A New Era has serious pacing issues. There are just so many subplots to juggle in here that characters keep getting lost in the shuffle. It's hard to get invested in anybody when they keep vanishing for long stretches of the runtime.

It's also a big mistake on the part of screenwriter Julian Fellowes to relegate Violet Crawley to a bed for most of the movie. Her cutting remarks, delivered with detached cynicism by Smith, are always a hoot, but A New Era doesn't take advantage of this reliable source of entertainment. Of course, that's not to say everything's a wash here. For one thing, a subplot involving a potential romantic dynamic between butler Thomas Barrow (Robert James-Collier) and movie star Guy Dexter (Dominic West) proves a highlight, with the duo having cheeky fun with conveying their internal feelings with a wry smile or an eyebrow wiggle. Similarly, there is some enjoyable tension in scenes where Mary and Barber grow closer and closer, benefited by the appealing chemistry shared by Dancy and Dockery.

For the most part, the antics at the Downton Abbey estate involving movie stars and the looming presence of sound cinema (remember, this takes place at the dawn of the 1930s) prove more interesting than the storylines at the French villa. There's just not much meat on the bones of the latter subplots, where the greatest antagonists are a mildly disapproving old French lady and the dark-colored clothes of butler Charles Carson (Jim Carter). By contrast, there's all kinds of romantic intrigue and cute nods to 1920s cinema back home at Downton Abbey. There's also the amusing sight of the movie lifting a subplot from Singin' in the Rain about a blonde-haired silent movie actress with a big voice struggling to adapt to the world of talkies. They even have her complain about a bush when she's first working  with a microphone!

The overabundance of subplots are overseen by director Simon Curtis, an auteur in the world of inoffensive but overly stiff movies aimed at older audiences after his work on titles like The Woman in Gold. It's a pity that neither Curtis or cinematographer Andrew Dunn, both newbies to this franchise, are able to bring much visual panache to the Downton Abbey universe that couldn't be accomplished on a TV budget. Most of the film looks perfectly competent, but conversations are staged in the same rudimentary fashion no matter what the unique tone of a given scene is. Even the introduction of lavish French backdrops don't inspire much in the way of striking imagery. Downton Abbey: A New Era is set on an extravagant estate, but visually, the whole thing settles for being boilerplate.

Downton Abbey: A New Era doesn't have much in the way of camerawork, narrative detours, or performances that will sway those that weren't already committed to this saga. Then again, if you haven't been won over by the charms of this rich family since they premiered on the small screen in 2010, I doubt you'll seek out the second entry in the Downton Abbey film series. For its target demo, Downton Abbey: A New Era will probably deliver enough of the goods even with a shortage of Maggie Smith. For the rest of us, it's a painless exercise that goes on too long and could've used a "less is more" approach when it comes to juggling so many characters. Hopefully they can correct those flaws when they get around to Downton Abbey and the Last Crusade.