The Rescue doesn't need any help being compelling documentary filmmaking 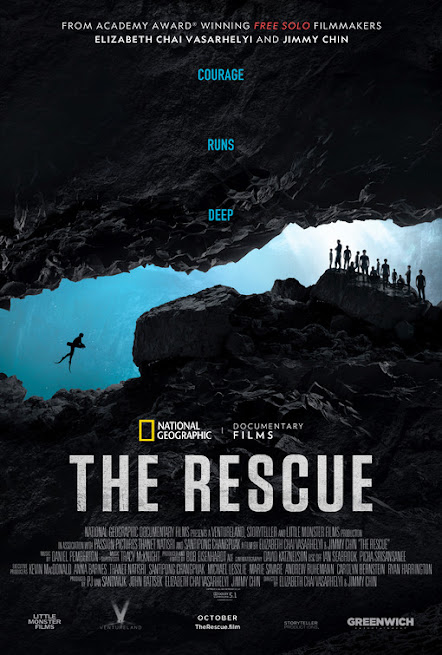 "They're both bad decisions...but one is more horrible than the other."

So goes a line from one of the interview subjects of The Rescue, a documentary chronicling the true story of how deep-sea divers pulled off a rescue mission of 13 kids trapped in a cave in Thailand. The comment refers to a discussion with the countries leader, whose struggling to figure out the best way to handle this tricky and time-senstivie operation. There were nothing but nail-biter scenarios in this endeavor, as everyone navigated situations that would be deemed implausible if they happened in a fictional film. Told through footage captured during the impossible task, The Rescue makes the struggles, improbablity, and courage of this entire event totally palpable.

In June 2018, 12 kids and the assistant coach of their soccer team became trapped in the Tham Luang cave. Initally, it seemed impossible to get these youngsters out, but an unlikely group would soon provide a sense of hope. John Volanthen and Richard Stanton were a couple of British divers who dove deep into dark trenches and holes for weekend fun. They weren't thinking they were cultivating skills to save lives. But they were soon called upon to lead a team of divers that could get these kids out of the cave and back to the surface. Nothing in this operation was easy, and more often than not, solutions to tricky problems (like how to get the kids to remain still while they're taken underwater from the cave) sound incedulous rather than feasible.

Taking a chronological approach to capturing this event, The Rescue directors Elizabeth Chai Vasarhelyi and Jimmy Chin never let go of the enormous gravity of this situation. Everything that can go wrong in this scenario does, including Volanthen and Stanton briefly planning trips home when it looks like the kids might have died in the caves. This is a documentary functioning as a recreation of the intense ambiance that gripped everyone involved in this rescue mission. It proves enormously successful in that front, especially since there's an open vulnerability to the interview subjects that constantly reminds the viewer that everyday human beings are in charge of pulling off this Herculean task.

This is especially true of anything dealing with Volanthen, Stanton, and the other divers from Europe that come to trek through the perilous caves. Rather than serve as a hagiographic ode to their actions, The Rescue see's these guys openly talking about how they were often in over their heads or disagreeing on what the right course of action was. It's also interesting how the documentary gracefully interweaves aspects of their personal lives into this story without it feeling like a distraction. Most successfully of these is a poignant anecdote about how one of the diver's lost his father just as a moment of triumph occurred in this rescue operation.

Sometimes, you don't need an elaborate equation or a dense review to explain why a movies good. The Rescue's got such a compelling real-life story that it would've taken especially clumsy hands to fumble bringing this documentary to life. Luckily, Vasarhelyi and Chin are anything but clumsy in making a film that focuses on the humanity behind a story that dominated news headlines. Making great use of richly vulnerable interviews and visceral footage captured during this event, The Rescue is a quality documentary, pure and simple.