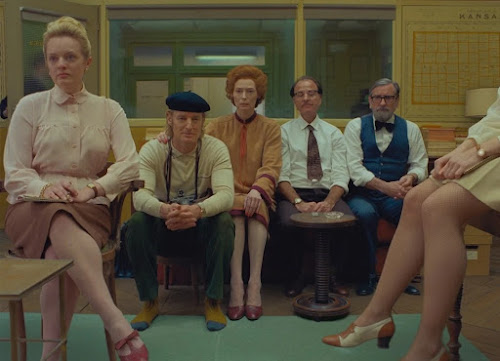 I can't stop thinking about The French Dispatch so, to Hell with it, I thought I'd just jot down some random spoilery thoughts I had on the production.

The French Dispatch begins with Anjelica Huston's narrator reading aloud an obituary of editor Arthur Howitzer Jr.  As she lists out the various biographical quirks and accomplishments of the now-deceased literary figure, it feels like we're in traditional Wes Anderson territory. This is often how he lays out the backgrounds of key characters, think of Badger explaining Boggis, Bunce, and Bean to Mr. Fox in Fantastic Mr. Fox.

But then in the final bittersweet scene of The French Dispatch, it's revealed where those words came from. Rather than just being exposition directed at the audience, the words at the start of the movie were penned by the various writer's Howitzer Jr. had an impact on during his time running the titular magazine. Hearing fragments of the narration ("It began as a holiday...") emerge now from the lips of in-universe characters lends new meaning to familiar words. In the vein of how the useless flare gun in Us subverts audience expectations regarding how everything in a Jordan Peele movie must mean something, Anderson is also pulling the rug out from under the audience in The French Dispatch. A reflection of how much one man meant to all these people is disguised as just a normal way for a Wes Anderson movie to convey background information.

This revelation, coupled with the restrained execution (even Alexandre Desplat's score largely vanishes here, there's a quietness in the scene reflecting how alone these writers are now without their faithful editor), moved me to tears, the first time I've cried in a theatrical movie since the pandemic began. My favorite kind of movies are ones where everything seems so goofy but then it sneaks up on you just how emotionally invested you've become in the proceedings. The French Dispatch does that throughout with its brief bursts of reflective melancholy, but this ending especially proves impressive in wringing so much pathos out of what could've been parodies of Andersonian characters.

Also on my brain; the handheld camerawork. As near as I can tell, The French Dispatch is the first instance of a Wes Anderson movie making use of this filming style. Considering how often Anderson leans on crisp wide shots in his work, it's fascinating to watch how he utilizes a technique meant to immerse the audience in what's happening on-screen. Using it primarily to accentuate tension between characters (like Benicio del Toro chasing after Adrien Brody or a terse conversation between Frances McDormand and college-aged rebels), Anderson's deviation from his visual norms makes the characters all the more vivid and lends an extra layer of idiosyncrasy to The French Dispatch.

Oh my God, and the guy who just lingers around the offices of the French Dispatch for 30+ years but never had a job? Amazing. Love how he kept just showing up in the background of shots, with no one ever calling attention to his presence. Gotta love that he's played by Wally Wolodorsky, Kylie the Possum from Fantastic Mr. Fox! Also cackled like a goon at Adrien Brody asking when he could provide an objection at a parole hearing, much to the befuddlement of the judges overseeing the hearing.

Also also; the conceptually impossible tonal balance of this movie is best epitomized by a moment in the Jeffrey Wright segment. When asked about why he's so fascinated with food by Liev Schreiber's TV host, the colorful set suddenly goes monochromatic and Schreiber and everyone else, except for Wright's Roebuck Wright, vanishes. Wright solemnly recounts how often he felt lonely living in France as a queer immigrant, but that the sight of a table, a chair, a friendly waiter, those were the reliable things that made him feel like he was at home. After this powerful moment of vulnerability, we cut back to colorful "reality", where Wright is asked if he remembers where he left off in his story about police cooking. "Well, of course silly goose!" Wright responds eliciting a way too loud shrill laugh from yours truly. In the span of a minute, The French Dispatch has swerved from contemplating how the tiniest parts of society can have such a monumental impact on our sense of being to making sure the phrase "silly goose" will never be heard the same way again. Magnificent, just magnificent.

Posted by Douglas Laman (NerdInTheBasement) at 11:13 AM