The French Dispatch serves up humorous and melancholy European tales 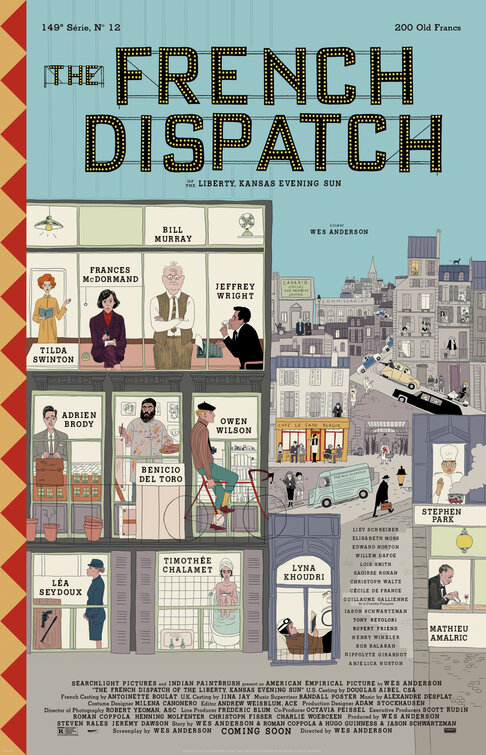 "I can no longer imagine being a grown-up in my parents world."

The French Dispatch begins with death. Specifically, the demise of Arthur Howitzer Jr. (Bill Murray), the founder and editor of the newspaper The French Dispatch. With him now being deceased, this iconic publication will also soon cease to exist. The issue containing his obituary will also be the final gasp for The French Dispatch. The film that follows, the 10th directorial effort from Wes Anderson, brings to life the segments within that concluding issue, with much of the focus going into three extended stories.

The first of these tales concerns a prisoner, Moses Rosenthaler (Benicio del Toro), who's also a brilliant artist and finding his works to be in high demand from rich collectors. The next story focuses on a rebellion from college-aged youngsters (their slogan is "the youth are grumpy") against the French government. This gets reported on by Lucinda Krementz (Frances McDormand), who finds herself constantly trying to maintain objectivity but always getting lured into this student protest. Finally, there's the ballad of Roebuck Wright (Jeffrey Wright), whose endeavor to report on police cooking ends up getting him ensnared in a much larger kidnapping plot!

Across these assorted tales are the constant concepts of death and loneliness. Throughout The French Dispatch, Wes Anderson is conveying the idea that what unites us all is that we're all going to die and we're all prone to feeling alone. It's a melancholy anchor for a story that's jam-packed with whimsical and fanciful touches, the kind that Anderson has made his bread-and-butter. But Anderson's works don't just get by on their eccentricities. They get you to care about unorthodox hotel managers, stop-motion animated foxes, and precocious High Schoolers who organize stage play adaptations of Serpico. The French Dispatch, with its irresistible balance of the farcical and poignancy, is an exquisite depiction of Anderson's tonal complexities.

What informs the power of the emotions this go-around is the emphasis on everyday people and objects. Journalism, like most art forms, is meant to make us look at the world around us in a different manner. A good piece of writing should make us gaze upon buildings, people, countries, or anything else with a more observant eye. The French Dispatch is an ode not to figures of legends, but folks who can slip through the cracks of history. Prisoners. Rebel leaders. A chef with an iron stomach. Immigrants. Combining these stories with the emphasis on mortality lends a bittersweet quality to the proceedings, but also an emotionally stirring aura as well. None of us will be here forever, but we've all still got a story to tell.

The care with which Anderson handles these concepts is matched by the apparent craftsmanship on display in the visuals. Shocking nobody at this point in his career, The French Dispatch is absolutely gorgeous in eye candy. Even the murkiest alleyway is covered in purple paint, a hive of rats next to train tracks can burst with bright hues, while a student rebellion is often depicted as a stage play, complete with parts of the set getting shuffled off of the screen. The ornately blocked and staged sets reflect the core theme of The French Dispatch, as all environments, no matter how seemingly disposable, get rendered with such affection. Bonus points too for employing brief bursts of color during black-and-white segments that echoed Samuel Fuller's Shock Corridor, never a bad thing to remind me of Samuel Fuller!

Along with his superb visual style, Anderson has also maintained his affinity for sprawling ensemble casts from his last two movies, with a bunch of Anderson regulars (Owen Wilson, Murray, Tilda Swinton, etc.) cropping up here alongside newcomers like Timothee Chalamet and Benicio del Toro. The singularity of Anderson's style as a filmmaker is wonderfully manifested by this collection of performers. It's hard to pick just one performance that's the absolute best in this project. Adrien Brody maybe got the biggest laugh from me with his confusion over how parole hearings are conducted while I could listen to Jeffrey Wright read a telephone book, I'll just say that.

Something else worth mentioning is the variety of art forms reflected here. Though a love letter to journalists and French cinema, The French Dispatch is also a big warm hug to all forms of art that people use to express themselves and, maybe, just maybe, make the world a bit more manageable. Anderson's camera shows such a fondness for all types of artistic expression, from painting to cooking to stage plays. This expansive approach to art is a boon to the film in several ways, including making sure the individual segments don't just feel like rehashes of one another. But they also help reflect the universality of the central concepts The French Dispatch is grappling with. The passions may vary from one artistic field to another, but we're all prone to death, loneliness, heartache, and other emotional sensations, as seen in a third-act scene between Wright and Lt. Nescaffier (Stephen Park).

Judging from its title and Anderson's love for paying tribute to other films, I wasn't surprised that The French Dispatch was packed with tributes to French cinema. I caught nods to Tout Va Bien and Le Bonheur, among many others. But one French film I didn't expect The French Dispatch to evoke was BPM (Beats per Minute), specifically in a tear-inducing conclusion that brings together the leads of the individual stories to touchingly suggest how death isn't necessarily the end of our lives. The way we touch others, whether it's through our actions or writing, or any other means, leaves ripple effects that linger long after our souls have departed this mortal coil.

The French Dispatch takes place against a world that's full of sorrow and problems, like violent altar boys drunk off communion wine or art dealers who only see the value of painting through dollars and cents. Being so cognizant of that makes this one of Anderson's most melancholy works. But being similarly aware, like in the conclusion to BPM (Beats per Minute) also ensures there's more than a kernel of hope in there. A work as varied in tone as it is in visuals, The French Dispatch is absolutely wonderful, a microcosm of the complexities and joy that make Wes Anderson such an incredible filmmaker.

Appendix: The French Dispatch has maybe the best use of the phrase "silly goose" ever in a movie?

Posted by Douglas Laman (NerdInTheBasement) at 8:43 AM