Julia Ducournau puts the pedal to the metal with Tiane 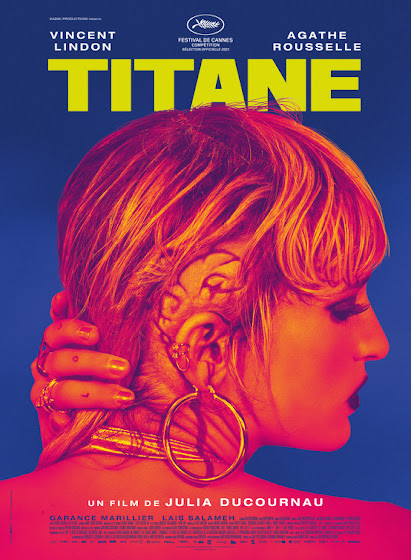 Given all the hype over its most outlandish and sexual elements, it may not seem like Titane is a movie that'll be relatable. And yet writer/director Julia Ducournau has grounded this provocative piece in incredibly grounded scenarios like the terror one can feel over their body and especially the struggles of emotionally bonding with others in the wake of traumatic scenarios. Neither of those is an easy situation to face yet all of us have had to confront one way or another in our lives. Titane is utterly singular in the kind of disturbing imagery Ducournau unleashes onto the silver screen, but it's got a beating heart that roars like the most revved-up car engine.
Alexia (played as an adult by Agathe Rousselle) had her entire world rocked when she was a kid thanks to a car accident that left her with a metal plate in her head. After this event, she found herself giving her parents the cold shoulder while embracing the family automobile. Now all grown up, Alexia's fondness for cars has turned sexual while her ability to develop connections with other people is, well, nonexistence. She's also a serial killer, a side-hobby that eventually catches up with her and places her on the lam. Once she becomes a fugitive, her life becomes intertwined with Vincent (Vincent Lindon), who's reeling from his own traumatic event from the past, in this case, his young son going missing.
There's so much about Titane that I adore, but I especially love Ducournau's confidence as a filmmaker (and on only her second directorial effort to boot!) that informs her decision to just let the outlandish happen without hand-holding the audience through explanations. Sometimes, characters just do inexplicable or strange things and that's OK. Human beings don't always act in totally rational ways when they're grappling with extreme sorrow, let alone when they're inhabiting a movie where the protagonist has sex with cars. The embrace of the peculiar works so well at capturing Alexia and Vincent's struggles with going into the future and also delivering imagery that's idiosyncratic...and creepy.
Ducournau has been open about how growing up with doctor parents, and their frankness with handling distortions of the human form has influenced her filmmaking and specifically how she depicts flesh on-screen. This trait is put to great use in Titane, which depicts some truly horrifying developments with a nonchalant visual sensibility. This proves incredibly effective on multiple levels, including how it doesn't reduce the characters on-screen to having their physical misery exploited and it makes certain shots extra eerie. A movie that kept zooming in on or rubbing the audiences face in the creepiness of oil secreting from places it shouldn't, would get tiring. Having that and other body-based disturbances appear in the background, meanwhile, proves quietly ominous as well as a perfect extension of Ducournau's filmmaking style.
The casualness with which Ducournau and cinematographer Ruben Impens chronicle human bodies also subtly breaks down visual language norms of cinema, horror or otherwise. The humans in Titane look like humans, they have tattoos, piercing, body fat, boils, they look like you or me. These elements are a part of the frame, but it never feels like Ducournau is lingering on these traits to define these details as inherently abnormal or even to elicit shock that our lady protagonist has (GASP!) armpit hair, as has been the norm in filmmaking. Instead, her naturally nonchalant depiction of flesh incidentally normalizes the appearance of all kinds of bodies, including the nude forms of Titane's two protaganists. This visual facet quietly ground a story that's so outlandish in something discernibly real.
Titane's glorious dance between the absurd and the grounded makes it a wonder to behold, especially since Ducournau refuses to go down any predictable narrative paths and, perhaps most importantly, she keeps filling the screen with unnerving imagery. There are lots of metaphors and subtle filmmaking flourishes that make Titane the thing dissertation papers are based on. However, it's also proudly bizarre horror cinema, the kind of scary movie that'll make you want to simultaneously cover your eyes and keep them glued to the screen. The terrific lead performances from Agathe Rousselle and Vincent Lindon contribute mightily to the captivating nature of Titane's most disturbing moments. Each of them consistently maintains their character's complicated interior world no matter how preposterous Titane gets.

Also putting me on edge was the score by Jim Williams and the sound work, both of which can make scenes depicting something as simple as Alexia walking into an airport unnerving. The motifs of William's compositions, including the clanging of a big drum with no other instrumental accompaniment and the uses of long stretches of silence, perfectly convey a haunting atmosphere as well as the isolation of Titane's protaganists. Sometimes, Titane reminded me of the greatest silent movies in how it doesn't need dialogue to stir up emotions in the viewers. That excellently uneasy score goes a long way to explaining why Titane often works so well even without anyone speaking.

After seeing Julia Ducournau's memorable directorial debut Raw, I was super intrigued by what she would come up with next. If I sat and pondered for ten years what she'd deliver as a follow-up to Raw, I never could have imagined everything Titane turned out to be. Ducournau delivers everything and the kitchen sink in here, including tender moments of poignancy, subversive approaches to depicting the human body on-screen, and sex scenes that would make Lightning McQueen blush. Like any piece of cinema this provocative, Titane won't be for everyone. However, if it's even halfway up your alley, you're going to get something unforgettable when you experience Titane. Film fans, start your engines, this one's something special.

Posted by Douglas Laman (NerdInTheBasement) at 9:39 AM