Lamb will leave you saying "What the flock?" 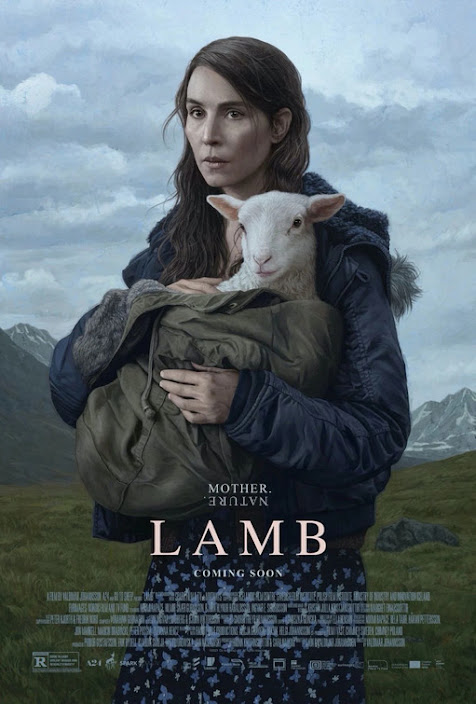 First, there was First Cow. Then, there was Pig. Let’s also not forget Gunda, a sparse documentary chronicling the everyday lives of farm animals. Barnyard critters are hot right now folks. They’re the cinematic trend of this modern era, presumably due to a generation of filmmakers growing up influenced by Barnyard: The Original Party Animals. Continuing this trend is Lamb, a new horror/comedy that has the most inexplicable premise for a genre film this Fall not named Titane.

An Icelandic couple, Maria (Noomi Rapace) and Ingvar (Hilmir Snær Guðnason), are tending to their sheep in their isolated farm, content with just living a quiet life. However, on a seemingly normal day, they discover something odd; one of the sheep has given birth to a human/lamb hybrid. A human child with the head and right arm of a sheep, the couple decide to raise the critter as their own daughter named Ada. Given that they don’t interact with anyone else, they have no trouble settling into a new routine with their new surrogate child…until uncle Pétur (Björn Hlynur Haraldsson) shows up and challenges everything he’s seeing, including Maria's seeming faithfulness to her husband.

Lamb is an odd beast. Watching it, I had to go “You’re crazy for this one, A24!” The VVitch started a trend of A24 taking strange indie horror films and trying to unleash them as mainstream theatrical releases, but other titles like Hereditary were both in English and had more scares in their runtime. Lamb isn’t so much a horror film as it is a tranquil observational look at two people processing some kind of trauma with a strange sheep/child combo in the mixture. It’s the kind of film destined to get smacked with an F CinemaScore and scores of befuddled user reviews on Amazon asking what the point of this exercise even was.

What’ll frustrate mainstream moviegoers turned out to be my favorite parts of Lamb. Watching the dissonance of this weird lamb/child hybrid waddling around a film shot, edited, and lit like a subdued indie drama proves surprisingly enduring in its entertainment appeal. Ada nonchalantly putting her boots on in the background of a shot or just handing her “father” his breakfast plate; juxtaposing ordinary life with something out of the ordinary is quite amusing. This level of dissonance is enhanced by the assured camerawork from director Valdimar Jóhannsson and cinematographer Eli Arenson works well in conveying a sense of “normalcy” for the titular character to clash against.

This sense of control and the apparent restraint gives Lamb a subdued but eerie vibe, one punctuated by moments of dark comedy that make a for an enjoyably complicated tone. However, I did find myself yearning sometimes for an extra level of oomph in Jóhannsson and Sjón's screenplay. The refual to pump the plot full of extra melodrama is admirable, but it sometimes feels like extra depth is being left on the table. Brief suggestions of extra allegorical meanings of Ada don't get fully fulfilled and the structure of the story ends up feeling like a lot of set-up without a ton of pay-off. The destination is very much the journey here, but the road to get there sometimes feels a touch on the empty side, even by the standards of a movie that's intentionally accentuating a world built on mundane uneventfulness.

Even if Lamb occasionally wants for extra layers of depth, the lead performances certainly commit to giving this oddball story tangible humanity. Noomi Rapace, in particular, does great work conveying the underlying sorrow informing every move Maria makes while still existing within the subdued confines of the story she inhabits. Practically a star unto themselves here (as corny as that sounds) are the vast Icelandic landscapes that surround our main characters. Their vastness and varying degrees of fogginess visually reflect how quietly lost Maria and Ingvar are. Lamb isn't as good as it could've been, but I could never call a movie with such pretty backdrops ba-a-a-a-a-d.