Antlers struggles with its allegorical scares 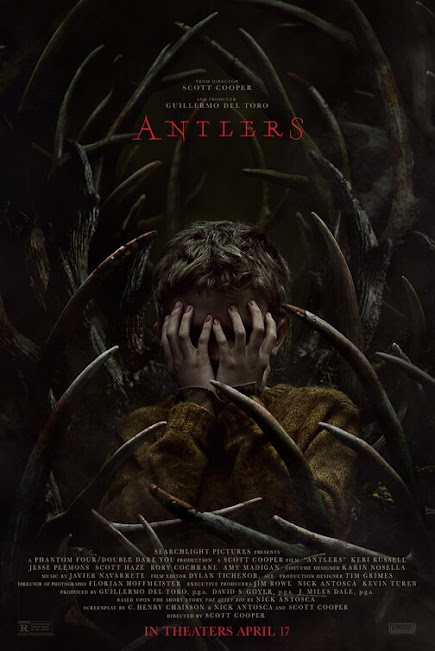 Antlers begins with assorted shots of an Oregon city slowly crumbling. Buildings in disrepair, abandoned train stations, walls coated in chipped paint. In the middle of it all is Lucas (Jeremy T. Thomas), whose looking for a place to play. Immediately, it's clear that he's a young child dwarfed by the larger run-down world he’s just trying to survive in. In these opening minutes, director Scott Cooper establishes the realism in the backdrop of Antlers as well as the tormented kid we’ll be following for the entire movie. There's a quiet ominousness just from the juxtaposition of an ordinary kid playing around in an environment where everything looks like a safety hazard. It's a level of creepiness the rest of the film will struggle to match.

Lucas is a Middle School student whose partially taught by Julia Meadows (Keri Russell). Herself a survivor of childhood abuse, Meadows begins to suspect something is wrong with Lucas given his withdrawn nature and the disturbing doodles he's been drawing. Though her brother, Sherrif Paul Meadows (Jesse Plemons), warns her to stay away, Julia keeps trying to figure out what's going on with this kid. Turns out, though, that Lucas isn't in just any abusive home. His father has been possessed by the spirit of a Wendigo, a monster that craves human flesh. As Lucas's dad gets more and more beastly, Julia keeps trying to save Lucas form the kind of traumatic home life that scarred her.

Cooper and cinematographer Florian Hoffmeister have certainly assembled a handsome-looking movie with Antlers. Precise camerawork chronicles Lucas shuffling across forests and run down buildings, always quietly emphasizing how this kid is dwarfed by bigger forces even outside of his abusive home. Imperfect textures of surfaces also reinforce the realistically shambling nature of the backdrops in Antlers. Visually, Antlers is solid and it's commendable how much the movie does commit to really graphic and disturbing imagery. Bodies aren't just nibbled on here, they're torn to shreds and resemble slightly less artistic versions of the sort of corpses left behind on Hannibal.

Unfortunately, some pretty and memorably unhinged imagery in Antlers can’t dilute the fact that the film is a messy one. Not content to just be a creature feature for gorehounds, Antlers also wants to be a treatise on surviving abusive households. There’s also some larger sociopolitical commentary in here, as evidenced by a comically ham-fisted stretch of early scenes where a series of background radio and TV broadcasts reference boosting the coal industry, white supremacy, and environmentalism. Antlers doesn’t opt to incorporate these entities into its plot, they’re just acknowledging they exist. Such is the surface-level nature of so much of the storytelling in Antlers.

The biggest narrative issue in Antlers, though, comes down to its attempt to use the Wendigo monster as symbolism for the monstrous behavior of abusive adults. That's not a terrible idea on paper, but in execution, it gets quite messy. This is especially true once the finale gets going and Antlers largely just wants to engage in generic monster mayhem that largely forgets the real-world scenarios this beast is supposed to represent. Adhering to the tropes of mainstream horror fare, complete with a cliffhanger ending that makes no sense thematically, doesn't suit Antlers at all. They needed to either commit to following the Wendigo as a representation of abusive parents or just do a fun creature feature. Clearly, doing both does Antlers no favors.

Antlers also gets undercut by a startling lack of frights, including from the Wendigo itself. Realized largely through CGI, this creature just isn't very creepy in how he's shot and the artificiality of the entity proves distracting. Meanwhile, the clumsy dialogue hinders a foreboding atmosphere to develop in low-key scenes reliant on conversations between the human characters. Without much to offer in either frights or allegorical storytelling, Antlers ends up being a pretty-looking but hollow tale. Lucas deserves a better home life to grow up in and he especially deserves a better-realized horror movie than Antlers to headline.