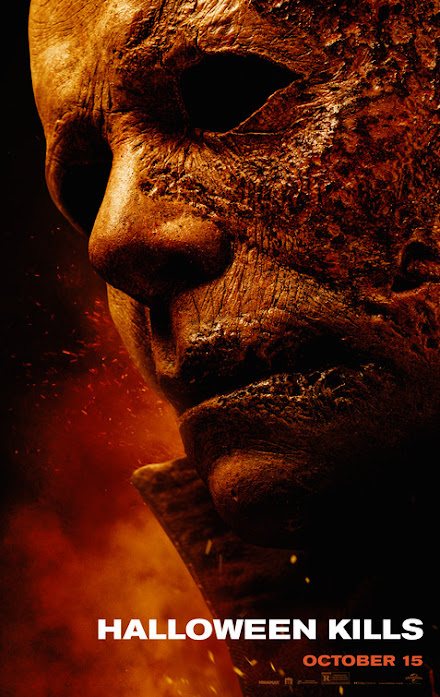 It took only a few minutes for me to realize that Halloween Kills was in trouble.

Starting in media res, with Cameron Elam (Dylan Arnold) walking home after a falling-out with his girlfriend, Allyson Nelson (Andi Matichak), at a school dance, Halloween Kills begins with Boyce discovering the wounded body of Deputy Frank Hawkins (Will Patton). After having his throat slit by a treacherous doctor who aided Michael Myers in the last Halloween movie, Hawkins is in need of serious medical attention. Then...we move back to 1978, the night Michael Myers first went on a rampage. Here, we get a prolonged backstory for Hawkins revealing that he has unresolved guilt over not killing Myers that fateful night.

Jumping back across two time periods so quickly, Halloween Kills screenplay, penned by Scott Teems, Danny McBride, and David Gordon Green, then moves to a bar where Tommy Doyle (Anthony Michael Hall), is talking about he was being babysat by Laurie Strode (Jamie Lee Curtis) the night Michael Myers went on his killing spree. Speaking of Strode, where is she? Halloween Kills will get to her soon, it just first has to establish the return of blink-and-you'll-miss-them characters from the 1978 Halloween film. This opening 15 minutes sets up the rest of the movie in an ominous manner; the emphasis here will be on callbacks and lore, not characters or even just entertaining scares.

The general plot from here concerns how Myers managed to survive the fire set by Strode, her daughter Karen (Judy Greer), and granddaughter Allyson. Now, Myers is out slaughtering people again. This time, though, the residents of Haddonfield, Illinois have had enough. Doyle begins leading a chant of "evil dies tonight!" that encourages all the townsfolk to take matters into their own hands when it comes to taking down Michael Myers. From there, the story primarily focuses on Hawkins and Strode (the latter of whom is unconscious for the first 55 minutes of Halloween Kills) having chats in their respective hospital beds while Myers kills generic townsfolk we never get to know very well.

The focus of Halloween in 2018 was on Strode and her trauma stemming from her experiences with Myers. Halloween Kills attempts to expand the focus on the entire town of Haddonfield, New Jersey, hence why the script keeps jumping from a whole slew of different perspectives rather than just focusing on one protagonist. Unfortunately, a whole bunch of half-formed characters does not end up equaling one compelling protagonist. There just isn't enough details in the random murder victims or even in Haddonfield itself to justify why they're the focus of the story. Plus, the screenplay can't properly handle such an expansive scope, it's all so messily assembled.

Worse, Halloween Kills opts to just be non-stop brutal kills from the get-go, now slow-burn scares like in the 1978 or 2018 Halloween movie. The latter Halloween title already struggled with properly juggling gruesome kills with an emphasis on long-term trauma, it's just so hard to be both Lynne Ramsay and Eli Roth. Halloween Kills "solves" this problem by just opting to be Eli Roth. There's relentless gore and killings in here, but only a handful of the murders are distinctive enough to be memorable. The most distinctive thing about these kills is how they're often so dimly lit that it's hard to tell what's going on.

If a Halloween movie is going to be this slapdash in its story structure and characters, the least it could do was be scary. Unfortunately, Halloween Kills struggles greatly in that department. Even worse, it fares little better when it tries to revert back to being a thoughtful drama. Without any new characters that are compelling and Strode stuck in a snooze for over half the runtime, there's nobody interesting to lend a grounded point-of-view for all the slayings. The screenplay also has a bad habit of having characters spell out underlying themes in didactic terms ("Now we're all becoming the monster," a cop gloomily says after a tragic death spurred on by a mob's desire to take down Michael Myers) that inspire chuckles rather than contemplation.

At least Jamie Lee Curtis got a presumably solid paycheck for not having to do much, she mostly just stands around in a hospital room. Feels truly crummy that Curtis's Strode proved so interesting in the last Halloween and then she gets largely jettisoned for a crop of primarily male new characters to take the spotlight. Even John Carpenter's score (composed with Cody Carpenter and Daniel Davies) isn't especially memorable, the ultimate kiss of death. If even Carpenter is phoning in his music, then you know a movie has gone wrong. Halloween Kills isn't the ultimate nadir of the Halloween franchise (at least Busta Rhymes isn't around...yet) but it's a disappointing example of what happens when you place lore and scale as a priority over characters or scares.

Posted by Douglas Laman (NerdInTheBasement) at 11:11 AM