Triangle of Sadness is a sometimes rocky but always compelling voyage 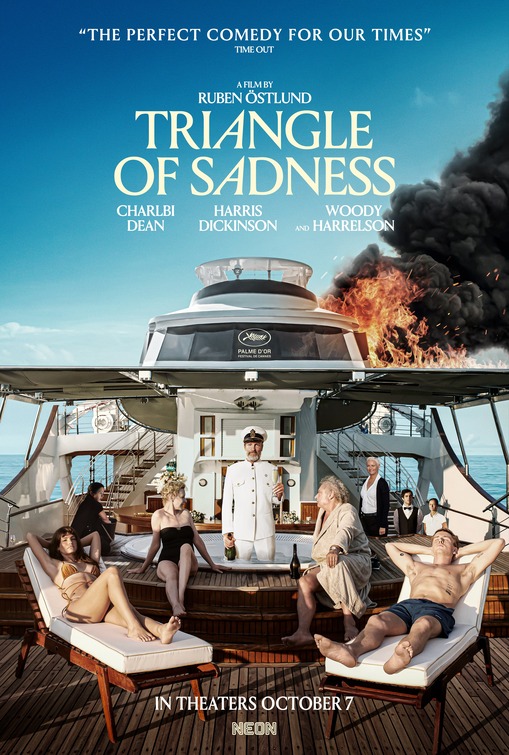 In talking about why Titanic proved so interesting to moviegoers, writer/director James Cameron has said that he saw the ship as functioning as a microcosm of the world. Viewers could see the lines between classes in modern societies sharper than ever in the context of a ship, while the people who were most impacted first by the ship sinking were also the ones most disadvantaged financially, just as the impoverished are the ones who first experience the devastation of climate change. Filmmaker Ruben Östlund has returned with Triangle of Sadness, another social satire from this director distinguished in his filmography by embracing Cameron's concept of a big ship working as a metaphor for broader society. Within Triangle of Sadness, though, there's a tad more on-screen vomit and excrement compared to the movie where Jack and Rose fell in love.

Split across three sections, Triangle of Sadness is focused on a collection of disgustingly rich people. This includes a young couple Carl (Harris Dickinson), a male model, and his girlfriend Yaya (Charlbi Dean), an influencer, as well as totally separate passengers like Dimitry (Zlatko Burić), a Russian capitalist who built a fertilizer empire. These and other exorbitantly well-off souls are all enjoying a trip on a cruise led by a figure only known as The Captain (Woody Harrelson). Initially, the screenplay is just focused on dark comedy emanating from the entitlement of the guests and their obliviously dismissive treatment of the wait staff on the yacht. Even when they think they're doing a good deed, like forcing the yacht employees to take a dip in the ocean to "relax", the wealthy are just suffocating the voices and wishes of working-class people.

A stormy night kicks off a series of chaotic events that forever change the lives of everyone aboard the ship, though far be it from me to spoil what kind of madness lies in wait. The fun of Triangle of Sadness comes from watching Östlund constantly finding new and unexpectedly bizarre ways to underscore how the various emperors in this film have no clothes. Spoiling the specifics would undercut the entertainment for newcomers, but I can comfortably say that these parts of Triangle of Sadness work because Östlund refuses to engage in half-measures with this screenplay. Just as this screenwriter commits to portraying nearly every character on-screen as thoroughly shallow and despicable, so too does Östlund commit to depicting inescapable mayhem awaiting these figures out on the open seas.

In the process, Triangle of Sadness paints an accurate portrait of how excessively wicked the upper crust can be while putting them through the wringer in a fashion as heightened as their real-world behavior. Is any of the chaos inflicted on the passengers of this vessel any more ludicrous than the average actions of Elon Musk? Granted, all while this mayhem is occurring, it's hard to escape the nagging feeling that Triangle of Sadness isn't quite as compelling or insightful as a critique of modern capitalism compared to, say, Sorry to Bother You. Focusing a narrative on characters who belong to the bourgeoisie instead of the proletariat while intending your story to critique wealth disparity will always have downsides. Östlund is clearly wanting the viewer to be enraged at the wealthy, but their very presence in the foreground of Triangle of Sadness still contributes to their omnipresence in American pop culture. Something like The Assistant manages to make the horrors of powerful rich people apparent without ever putting them in the frame, by contrast,

Similarly, much like Östlund's last film The Square, Triangle of Sadness can be too excessive for its own good (in this case, a 150-minute runtime could've been trimmed for sure). Does this comedy risk being as opulent as the uber-wealthy characters it intends to critique? On the other hand, perhaps it's necessary for Triangle of Sadness to be so extravagant to provide a mirror to the rampant consumerism and splendor in the real world. I kept flip-flopping between which of these two roads Triangle of Sadness was traveling down and ended up feeling the latter was more true than not. Much like Richard Kelly's Southland Tales, Triangle of Sadness is here to provide a farce whose immense absurdity is needed to capture the mayhem happening far outside the reaches of your local movie theaters. Plus, it's commendable that a movie like this offers so much for the viewer that you can see so many valid interpretations of its ambitions. Many other modern social satires like Don't Look Up wish they had that level of depth.

Triangle of Sadness can't evade all of its shortcomings, but it does prove constantly entertaining and intriguing thanks to the assured direction of Östlund and a cast that's game for whatever this movie throws at them. Dolly de Leon as Abigail is the most impressive member of that stacked roster of performers. Handed the most prominent working-class character in the story, de Leon is also handling the figure in Triangle of Sadness that experiences actual change as the plot progresses. She handles all these finer nuances with ease while also conveying a personality that could still exist in the same universe as the more pampered performances she's surrounded by.

Do you have a strong stomach? Do you like dark absurdist humor? If the answer to either of those questions is "yes," Triangle of Sadness is going to end up being for you. I'm still not sure if it works fully, but it's such an idiosyncratic and compelling creation that kept my mind engaged, especially in a third act that contemplates if the strains of capitalism are so omnipresent that they'll mold our lives even when we're detached from society itself. Also, there are good sight gags based around excessive vomiting. As James Cameron said, a luxury cruise can function nicely as a microcosm of the world. In Triangle of Sadness, it functions as a microcosm of a world on fire from the moment it leaves port.