The Inspection excels in its acting and writing 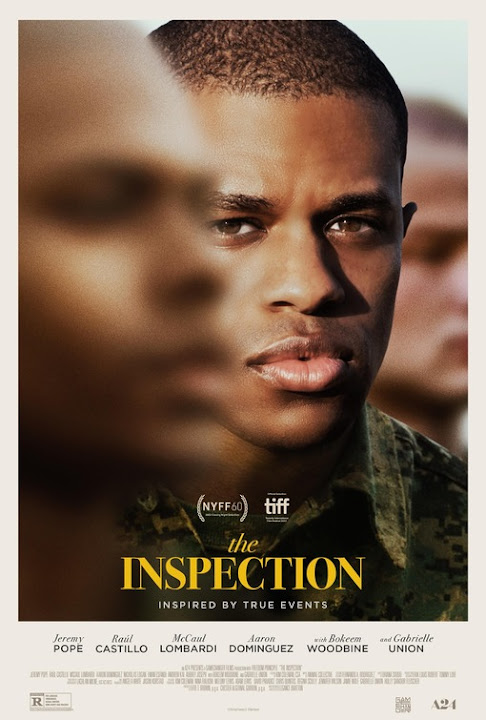 The quietly thoughtful nature of The Inspection is communicated almost right from the start of Elegance Bratton's screenplay (he also directs this quasi-autobiographical yarn). Most films with LGBTQIA+ leads that are heavy on weighty drama depict queer characters existing in total isolation from any larger queer community. Here, though, protagonist Ellis French (Jeremy Pope) is shown encountering openly queer pals on the subway station and sharing a pivotal conversation with a self-described "old queen" in a homeless shelter. Queer lives are everywhere from the start of The Inspection and French is well-aware of both that and his own orientation. Emphasizing this lends a sense of realism and a lived-in quality to The Inspection from frame one and kicks the movie off on the right foot.

From here, French decides to enlist in the Marine Corps, much to the befuddlement of his disapproving and intolerant mother, Inez French (Gabrielle Union). This is 2005, the final years of "Don't Ask, Don't Tell", so French is aiming to keep his head down, not attract much attention, and maybe even avoid being coded as "gay" by his fellow soldiers who would rather die than be queer. Unfortunately, the truth always comes out and it isn't long before his fellow marines, including the incredibly homophobic instructor Leland Laws (Bokeem Woodbine), know the truth. Thus begins a lengthy trial of turmoil for French as he tries to endure in an environment that doesn't want him to exist in the first place.

The Inspection is a harrowing movie with some appropriately uncomfortable scenes to watch, but one of the best facets of its screenplay is something akin to The Lonely Island's "Spring Break Anthem"; a depiction of how queerness is demonized in general society but pronounced depictions of heterosexuality are A-OK. The hypocritical nature of these norms is amusingly rendered in moments like the same soldiers who're terrified of even touching shoulders with French getting into a frothy passion over images of naked women. Bratton frames these double standards as absurdly amusing, but there's also a layer of darkness here. Gays must be quiet on all matters, while the straights can go as loud as they want in their expressions of sexual desires.

It's a theme that intriguingly runs throughout The Inspection while Bratton's screenplay demonstrates further creativity in eschewing a standard character arc for how French and his marine comrades get along. Normally, one would imagine they'd all start as enemies before gradually becoming friends as the movie progresses. Bratton, though, opts to make things more complicated than that. Some enemies become allies, but there's often a "two steps forward, two steps back" approach in how French grows close to people like Laurence Harvey (Raul Castillo). Going this route injects further realism into the proceedings while making one never certain just where French's journey will take him.

Bratton and cinematographer Lachlan Milne's visual sensibilities in The Inspection aren't quite as idiosyncratic as the film's many narrative flourishes. However, the film is never incoherent in terms of its imagery, and its competent camerawork never subdued the great performance scattered throughout the cast. A sequence depicting the interior yearning mind of French does make great use of bright colors, smoke, and dreamlike visuals to make for a vivid dive into this man's mind and an appropriate contrast to the intentionally subdued aesthetic of the rest of the feature. I wouldn't have minded more scenes like that, departures from reality that allow us to center French's desires over just his turmoil, but what we do get suggests Bratton does have some range as a visualist.

The Inspection is overall a strong movie, but even if its script and editing were trash (which they aren't, for the record), it would still be worth the price of admission just to discover Jeremy Pope's talents as an actor. In his first lead role in a motion picture (he's previously been a veteran of the stage and starred in two Ryan Murphy-produced TV shows), Pope is captivating. French is a character who often has to juggle layers of different personalities just to get through the day at this Marine training camp. Handling all of those layers could've resulted in a jumbled performance, but Pope gracefully communicates so many disparate parts of French's psyche even when he's just standing there waiting for orders from a commanding officer. It's a tremendous performance that wrings maximum pathos out of an understated part.

The supporting performances are also great, with Union playing a great subversion of her normal silver screen persona while casting the always compelling and authoritative Woodbine as a military sergeant was a stroke of genius. The Inspection is a feast for those who appreciate good acting and incredibly sharp writing. While it could've stood to have a little more panache in its visuals, The Inspection, as seen by the quietly subversive writing in its opening scenes, is well worth standing up and saluting.

Posted by Douglas Laman (NerdInTheBasement) at 9:13 AM