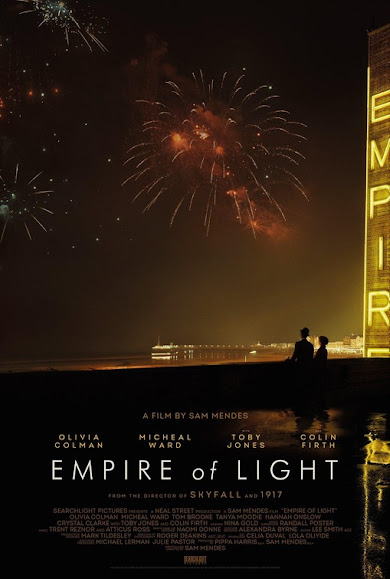 In one of its many scenes that could’ve functioned fine as an ending, Empire of Life contains a scene where movie theater employee Hilary Small (Olivia Coleman) finally watches a film on the big screen in her workplace. As she becomes enraptured by the images on-screen, we cut back to the projectionist's booth, and specifically to close-up shots of various photos of classic movie stars taped to the walls of this area. It’s all shot quite nicely, Trent Reznor and Atticus Ross’s score sounds pretty, and Coleman is incredibly gifted at conveying a character experiencing a life-changing event just through facial expressions.

Yet, it all means nothing.

This scene has no point within the screenplay penned by writer/director Sam Mendes. It doesn’t pay off anything substantial on a character level. Worse, it’s detached from Empire of Light’s previous primary focuses of racial tensions in 1980s Britain and mental health issues. Without any way for this sequence to mean something, anything, within the context of the film it occupies, it might as well be an ad for AMC Theaters. Much of Empire of Light is, unfortunately, like this sequence. Handsomely made, competently acted, well aware of the emotional beats it wants to hit, but tragically unsure of how to blend it all into a cohesive whole.

Small works at a small movie theater off the coast of England in 1981. She keeps to herself, doesn't speak up very often, and lives an overall muted existence. The arrival of Stephen (Micheal Ward) as a new employee at the theater initially doesn't seem to matter much, he's just another co-worker she'll make small talk with. But a romance begins to blossom between the two, with the pair finding so much joy in each other's company. Unfortunately, they each have larger problems to deal with, with Stephen often being targeted by a wave of renewed racism in the country while Small has a troubled past that she's always living in the shadow of.

Empire of Light finds its best footing in its earliest scenes, when it appears this will be a hangout movie about movie theater employees. The throwaway interactions between characters have a tangible quality to them. Plus, it’s hard not to like conversations shared between a distinctly 1980s punk rock lady and an infinitely more reserved middle-aged projectionist. The rapport between Small and Stephen is also at its best as they tiptoe around the possibility that they may be falling in love. No heightened drama to interrupt their camaraderie, just two good actors sharing some solid chemistry.

But the more big ideas Empire of Light tries to squeeze into its screenplay, the more it begins to wobble and fumble under its weight. Confrontations with racism in the 1980s may be well-meaning, but they’re awkwardly executed and tend to show only intolerance manifesting in extremely pronounced means. Cartoonish caricatures are the only depiction of bigotry here. The times when Empire of Light grinds to a halt to confront this abhorrent behavior, it reduces Stephen to being either a punching bag for bigots or someone gently explaining how racism is still a problem to Small. There’s no problem with trying to confront hot-button issues, but you’ve got to deal with something like racism better and more creatively than Empire of Light.

Empire of Light's inability to go subtle also proves to be a key problem on a narrative front. The cinematography from Roger Deakins, with its subdued color palette and melancholy lighting, and the score from Reznor and Ross belong to a restrained and quiet character piece. But these elements clash against the film's tendency to go loud whenever it wants to be emotional, like Small bashing a sand castle or the police repeatedly knocking on Small's door. Empire of Light bashes you over the head with both what you're supposed to feel and what's happening on-screen. This story wants to touch your heart, but it's too aggressive to ever get close to that. Even worse, it jostles awkwardly from one big plot development to another. It never feels like there are organic transitions between its various themes or characters. This especially becomes apparent in its awkward third act, when it seems like the action is winding down for good only for the story to twist itself into knots to keep going on five or six separate occasions. If I'm thinking about whether or not the credits are about to roll instead of getting invested in the images on-screen, something's gone wrong.

The affinity Mendes has for such pronounced displays of human behavior end up leaving Coleman out to dry. This actor does the best she can with some really clumsy dialogue and ham-fisted expressions of big emotions, but even she cannot turn every lemon of Empire of Light into lemonade. Similarly, kudos to Micheal Ward for emerging as a memorable and charming performer (he gives the best performance here) despite being handed such a thinly-sketched character. There are enough pieces of commendable subtle acting between Coleman and Ward, not to mention solidly-realized cinematography and music, to keep Empire of Light from being a total washout. However, it's still a disappointment, almost crushingly so, that Mendes ended up delivering such a disposable drama despite having so many talented artists at his disposal. The magic of movies that entranced Small so much in that superfluous Empire of Light scene is shockingly absent from the film she headlines.