Javier Bardem can only liven up Lyle Lyle Crocodile so much 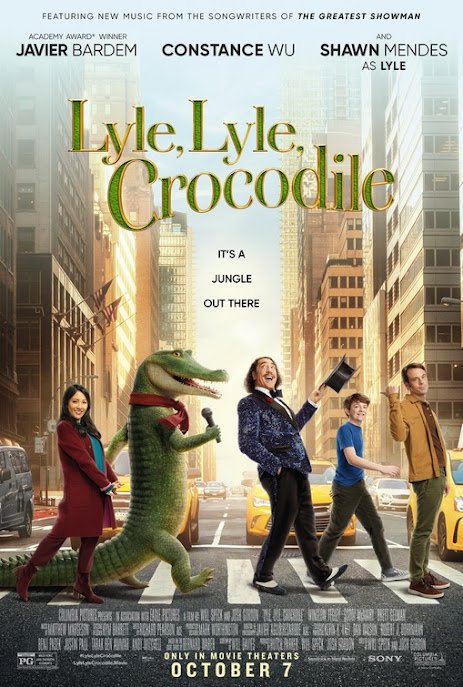 If Disney wants to focus on Marvel movies and live-action remakes when it comes to big-screen features, then I guess other studios will have to step up with the generic live-action kid's movies. Somebody needs to deliver on this genre and Sony/Columbia has taken a stab at doing their best impression of a 1990s Disney film with Lyle, Lyle, Crocodile. With this adaptation of the Bernard Weber children's book of the same name, audiences get two pastiches for the price of one as Lyle, Lyle, Crocodile is also an attempt to ride Paddington's coattails. The result of all that imitating is something painless, but also oddly oblivious to the best parts of the movies it's mimicking.

Lyle (Shawn Mendes) is a saltwater crocodile with an incredible talent: he can sing! Down-on-his-luck showman Hector P. Valenti (Javier Bardem) is captivated by this critter and see's endless possibilities for fame and fortune with Lyle. Unfortunately, Lyle has a mean case of stage fright and his inability to perform in front of people sends Valenti into enormous debt. While this wannabe superstar is paying off that money, Lyle stumbles into the lives of the Primm family, nervous son Josh (Winslow Fegley), wistful mom Katie (Constance Wu), and nebulously-defined dad Joseph (Scott McNairy). Lyle might be just what this family needs to overcome their individual problems...if they all don't catch the ire of neighbor Mr. Grumps (Brett Gelman) first, that is.

The best parts of Lyle, Lyle, Crocodile show screenwriter Will Davies, and directors Will Speck and Josh Gordon demonstrating a willingness to embrace the silliness and fantasticalness that comes with any children's book. Valenti is the best example of this. Being a guy who acts like he's Willy Wonka when he's really more Troy McClure, Valenti is an oversized personality who wouldn't exist in the real-world but feels perfect for the target demo of children's literature. I was also relieved to find that Mr. Grumps is just allowed to be a cartoonish villain, they don't even make self-deprecating jokes about his name. No need for a new prolonged origin story to explain why he's so cantankerous, he just functions like a classical pronounced children's book baddie.

Unfortunately, Lyle, Lyle, Crocodile doesn't immerse itself fully into the fantastical qualities ingrained into the best children's books. Instead, most of the runtime is dedicated to run-of-the-mill kid's movie hallmarks executed with little panache. It's like Speck and Gordon's inexperience in the world of kid-friendly entertainment (their biggest directorial gigs before this were a pair of Jason Bateman vehicles, The Switch, and Office Christmas Party) inspired them to make sure they touched base on every narrative standards in the genre. Even an epilogue set in a courtroom echoes the preposterous climax of Air Bud.

Lyle, Lyle, Crocodile is rarely bad and it's never painful, but it's also quite rudimentary. It hits the beats it thinks audiences want it to hit without ever having the courage to try something new. This is especially apparent in the various musical numbers penned by Benj Pasek and Justin Paul. The duo's tunes have always sounded more like pop ditties on the radio than classical musical numbers and that's especially apparent when their lyrics are being sung by Shawn Mendes. Even a tune called "Rip up the Recipe," which attempts to channel the Sherman Brothers in smuggling in life lessons into a "whimsical" package, feels more mechanical than naturally fun despite a game performance from Constance Wu. These kinds of lackluster tunes might be the thing that really keeps Lyle, Lyle, Crocodile from resonating with kids. What youngster is going to turn off We Don't Talk About Bruno to jam out to these generic numbers?

The movie as a whole offers so little to chew on that I found myself mostly amusing myself over small but notable shortcomings in the screenplay. In the third act, for instance, Josh specifically blames his dad for making him so paranoid about the world. But we never saw Joseph behaving like that to his son? It was the mom who was established at the beginning as being worried about her child! What a weird inconsistency in the script, I hope somebody got fired for that blunder. Similarly on a visual level, a scene at the end where Lyle interacts with a pack of other more feral and non-singing crocodiles reinforces what a bad idea it was to design Lyle to just be a semi-realistic looking crocodile. It's hard to tell him apart from his antagonistic brethren! Rather than embrace a fun and distinctive design for Lyle, this movie opted to go the boring route of quasi-realism.

Parents who get dragged to Lyle, Lyle, Crocodile won't find anything disastrous here, save for the clumsy choreography and camerawork during the amusingly small-scale musical numbers (I guess this is what musicals shot during COVID look like?) Compared to Alvin and the Chipmunks, Lyle practically looks like Willy Wonka and the Chocolate Factory. But saving for an endearingly committed Javier Bardem performance, there's also not much here to recommend. It's all so apparently going through the motions to remind you of vastly superior movies (like Paddington) you could be watching instead. Lyle, Lyle, Crocodile, simply put, is like a film generated by one of Netflix's A.I. programs to evoke live-action 1990s Disney movies.

Postscript: Why is Ego Nwodim credited in the main cast in the opening credits despite appearing in only two small sections of the movie and having barely any lines? What a waste! I bet she could have brought some extra laughs to the proceedings.

Posted by Douglas Laman (NerdInTheBasement) at 8:59 AM