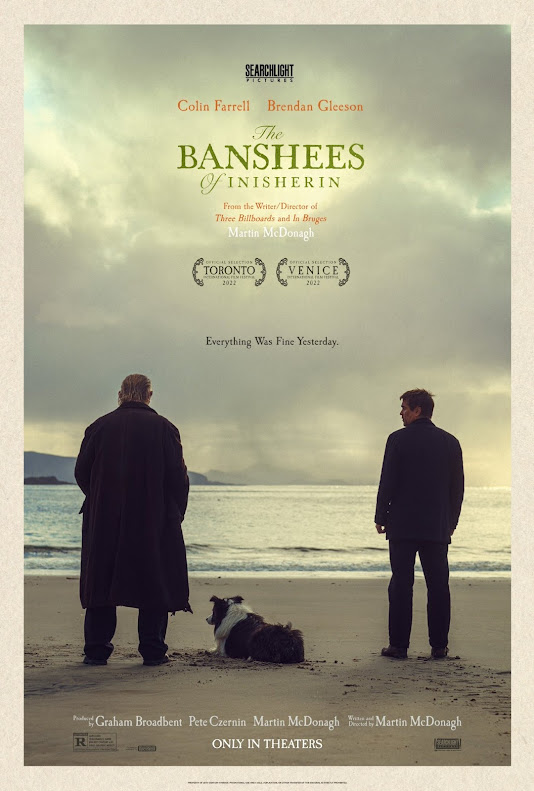 All throughout writer/director Martin McDonagh's The Banshees of Inisherin, the Irish Civil War rages on in the background. Both the audience and the film's characters never see this battle up close. Cannon fire is heard, explosions can be seen in the far-off distance, and a police chief even talks about traveling there to view an execution. But we don't see it first-hand. The distance allows the Irish Civil War to function as an extension of a concept that fascinates The Banshees of Inisherin: the constant conflict between human beings. No matter what the circumstances of the world are, we're always at each other's throats. That police chief's uncertainty over who is even being executed and by whom shows that humans often love conflict just for the sake of it, we don't even need to know the details about the warring sides.

This eternal staple of human behavior is reflected through the dynamic between the two lead characters of The Banshees of Inisherin. All the ceaseless turmoil captured by the cameras imbues the proceedings with unshakeable melancholy, but also plenty of memorable dark comedy. In order words, this is vintage work from writer/director Martin McDonagh.

On the fictional Irish island of Inisherin in 1923, there's not a ton to do. You tend to your animals, you drink, you make some friends. It's no wonder, then, that Pádraic Súilleabháin (Colin Farrell) holds his longstanding friendship with Colm Doherty (Brendan Gleeson) so close to his heart. As The Banshees of Inisherin begins, though, something's gone wrong. Doherty no longer wants to speak to Súilleabháin. This musician has come to realize that life is too short to be wasting time making small talk with Súilleabháin. Doherty just wants to end things there, bury this friendship in the past right away. But Súilleabháin isn't about to give up Doherty without a fight. So begins a conflict that keeps escalating in severity, all over one fellow not wanting to share a pint with a certain guy anymore.

It's no surprse that The Banshees of Inisherin's origins date back to it being initially conceived as a stage production (though, given how it had a slightly different title and what sound like major plot differences, it's unclear how much of this movie is taken from its initial incarnation). Often the movie echoes something like Waiting for Godot, a play where the scope is minimal but the contemplations on the nature of humanity are dense. The Banshees of Inisherin has a lot for viewers to chew on, but its surface-level pleasures are many. In particular, McDonagh's gifts for working with actors is alive and well here and helps draw out a murderer's row of memorable performances.

This includes Colin Farrell in a leading turn that made me realize that this man's gift is in playing pathetic people. I don't mean that as a commentary on Farrell as a person (he seems nice in interviews!) He's just got a real gift for portraying people that Jack Lemmon used to specialize in, a man whose sad-sack nature radiates off the screen, their gait alone conveying an overwhelming aura of woe. The Lobster, In Bruges, even his interpretation of Oswalt Cobbleplot/The Penguin in The Batman, these are all people who are all so awkward and brazenly imperfect. His gifts for portraying such characters continues with Pádraic Súilleabháin, a man who starts The Banshees of Inisherin with head hung low before getting even more mournful from there. Farrell lends such a captivating quality to his performance here and it's especially impressive how many layers he can reveal in Súilleabháin. This guy can seem intimidating, sympathetic, detestable, and so much more all in the same movie. This is why Farrell is so good at playing these kinds of characters. He makes them pathetic with a capital-P, but also nuanced enough to seem like believable humans.

Farrell's accompanied by a splendid array of deeply lived-in supporting performances, with Brendan Gleeson adding another exceptional turn to his long list of unforgettable credits as Colm Doherty. Kerry Condon might just steal the show, though, as Siobhán Súilleabháin. In her most high-profile film role to date, Condon provides a fascinating anchor to the two male leads. She's a woman who seems to have a little more worldly wisdom who can still be vulnerable and not have all the answers. Condon finds such fascinatingly subtle ways to convey the multi-layered nature of her character while her execution of a very important piece of dialogue to Doherty is handily one of the best line deliveries of 2022.

These actors exist within gorgeous-looking Irish landscapes so well-realized through McDonagh's director and the cinematography by Ben Davis. Taking place in a time before electricity was common for rural Ireland residents, Davis makes fantastic use of natural light even in interior environments. Nighttime scenes are always cogent thanks to being tinged in bursts of beautiful streaks of light from candles or the shimmering moon. Visually, The Banshees of Inisherin looks terrific and its strong handle on its camerawork enhances the humor of its finest visual gags. If one ever needs proof that comedies require excellent camerawork just like any other genre, here it is.

All of these top-notch performances and compelling imagery are tied around a story that masterfully bobs and weaves between dark comedy and an inescapable melancholy woe. McDonagh's screenplay is especially good at the seemingly simple but tricky-to-execute feat of constantly keeping you guessing on how things will escalate next. The stakes of The Banshees of Inisherin keep getting taken to the next level, but not in a way that sacrifices its emotional intimacy. These developments feel organic, a natural way to show the lengths people will go to keep conflict brewing. Plus, these breakthroughs in the narrative are always accompanied by intimate moments that allow these characters from 100 years ago to feel like real breathing humans.

In the wrong hands, Pádraic Súilleabháin could've been insufferable, which would mean that all the escalating chaos in his feud with Doherty wouldn't be interesting to watch. But McDonagh's script gives Súilleabháin people and donkeys to care about, we get to gaze at him in quiet moments bonding with the most important creatures in his life. These tenders scenes are where The Banshees of Inisherin's heart is on display, while its darkest moments are where the grimmest tendencies of humanity come out to play.

Human beings are more than the conflicts that define them...but, as that constantly raging Irish Civil War indicates, conflict is still such a massive part of our lives. Even when there aren't cannons firing, human beings still find ways to feel seething hatred towards one another. That old saying of "laugh through the pain" is so true of The Banshees of Inisherin. This movie keeps a steady stream of dark laughs flowing even as it recognizes darker aspects of human nature. It's often brutal. It's sometimes hysterical. It's The Banshees of Inisherin, one of the year's best movies.