Messy yet intriguing, Crimes of the Future will satisfy Cronenberg fans 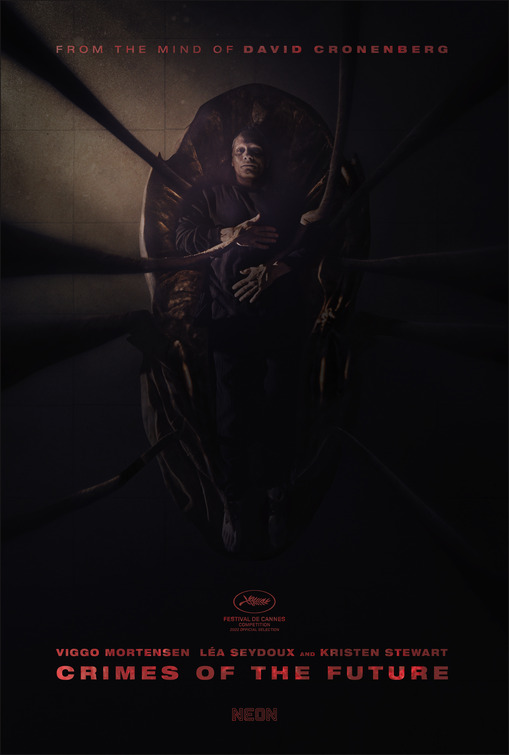 "Hell is other people", so the saying goes, but writer/director David Cronenberg knows better than anyone that Hell can be our own bodies. Considering how unpredictable and fragile everything associated with our bodies is, it's a wonder our days aren't spent staring at our fleshy vessels in a gigantic mirror contemplating how these things don't just crumble after a few minutes of use. Throughout his captivating career, Cronenberg has found various ways to explore the horrors of our bodies, ditto the various ways human beings transform both physically and psychologically. His newest film, Crimes of the Future, his first directorial effort in nearly a decade, isn't the best thing he's ever made, but boy does it feel good to see Cronenberg delving into his favorite themes and style of weirdness again.

As the title implies, Crimes of the Future takes place at an unspecified point in the future. Here, surgery has become so commonplace that people can just do it on their lunch breaks. The ubiquity of this process has allowed performance artists like Saul Tenser (Viggo Mortensen) and Caprice (Lea Seydoux) to perform extraordinary acts of surgery for captive audiences. They're so infamous that members of the National Organ Registry, particularly Timlin (Kristen Stewart), keep an eye on these performers and the disease (Accelerated Evolution Syndrome) that allows Saul to undergo so many surgeries. While this is all going on, our lead characters begin to plan a new shocking act. This proposed show will take Saul and Caprice right into the heart of another faction of society that's also challenging the status quo.

Cronenberg's vision of the society of tomorrow is not a utopian paradise nor an evocative depiction of a neon-covered dystopia, like Blade Runner. Instead, the world of Crimes of the Future is one that seems to be dying around all the characters. Walls are chipped, wallpaper is peeling, and everything seems to be crumbling. There are no lavish locales here, the rich and the poor appear to all inhabit the same dingy backdrops. There's an interesting contrast in how these environments are succumbing to the kind of vulnerability and aches of time that the main characters of Crimes of the Future work overtime to avoid. While the humans in this story scramble to erase the presence of pain, their homes and workspaces remind them of the ever-present existence of time's ceaseless march.

The dissonance there lends an innately compelling quality to Crimes of the Future's exploration of mortality and the dangers of trying to control so much in our lives. Such thoughtful notions help guide viewers along the bumpier parts of Crimes of the Future, of which there are several. For one thing, Cronenberg's screenplay often resembles a collection of short stories jaggedly sewn together to create a singular feature film. This type of structure has its interesting moments, but it can also make it hard to keep the momentum of tension going for certain subplots, such as Saul's recurring rendezvous with an investigator. I also wanted even more disturbing body horror stuff! A dude with a bunch of ears stitched across his body is a cool visual (no wonder it's been all over the posters), but there isn't a ton of stuff like that. More disturbing body horror please! Certain visual elements, including both CG enhancements and the execution of certain prosthetics, also leave something to be desired in how they're filmed and lit.

While these are the parts of Crimes of the Future that are messy, there are also several elements of the production that are so ambitious it makes you want to stand up and cheer for the return of a distinctive auteur like Cronenberg. For one thing, this is that wonderful kind of film that drops terribly silly dialogue with full-stop seriousness. Discussions about cannibals and children eating plastic wastebasket are delivered with nary a trace of irony by the actors on-screen. It's so much fun to watch ludicrous material be handled like that. The actors are also all swinging for the fences and then some, with Kristen Stewart especially impressing in her supporting role. It's hard to even describe her perpetually horny yet timid character, but her line deliveries and body language are fantastically idiosyncratic and convey such a unique personality beautifully.

Best of all, some of the best aspects of Crimes of the Future perfectly capture human beings and their bizarre relationship to their bodies. A chair meant to help Saul chew and eat his food is the perfect microcosm of this. How on Earth anyone would think this chair, which looks like it was designed by Guillermo del Toro and made out of bones, would be something you'd want in your house is beyond me. But of course, people would buy such an item if it made their lives easier, just as people would start ripping organs out of their bodies if they saw it as a gateway to fame and recognition. The things people will do to their bodies for personal gain and to stave off mortality are remarkable, there's really no other way to convey such preposterousness except for a skeleton eating chair. Even if it's messier than his best works, Crimes of the Future is a welcome sight just to have Cronenberg delivering such thoughtful and visually arresting insights.