Lightyear doesn't quite go to infinity and beyond, still proves mostly entertaining 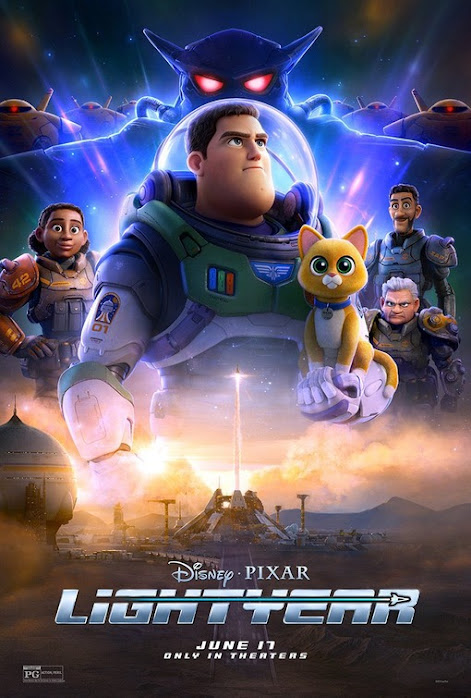 Lightyear, the new feature from PIXAR Animation Studios, is meant to be the movie that inspired the Buzz Lightyear action figure in the Toy Story universe. Rarely has a pit more immediately formed in my stomach than in the opening minutes of Lightyear where they're really hammering home the connections to earlier Toy Story films. This version of Buzz Lightyear (voiced by Chris Evans) prattles off several lines said by Buzz in the first Toy Story (including "You're mocking me, aren't you?") and director Angus Maclane seems to be telling audiences to strap in for a bunch of fan-service. As someone who considers the final "falling with style" scene from the initial Toy Story one of the great cheer-worthy movie moments, the prospect of getting lines of dialogue from my childhood regurgitated back at me sounded deeply unpleasant.

Thankfully, Lightyear manages to reorient itself and set a much better creative path from here. Never quite good enough to justify why we needed a solo Buzz Lightyear film, the feature does manage to craft its own identity beyond reminding people of some of PIXAR's greatest motion pictures.

Lightyear begins with Space Ranger Buzz Lightyear and his commander, Hawthorne (Uzo Aduba), trying to escape from a distant alien planet with a spaceship containing thousands of human beings. Lightyear takes it on himself to get everyone to safety, which only results in everybody getting marooned. The work-focused Lightyear is now more determined than ever to complete this mission and get people back to their old lives. To do this, he'll need to test new potential sources of hyperspeed. The wrinkle here is that each test inspires time discrepancy. Buzz will age mere minutes while everyone back on the alien planet ages years.

Eventually, Buzz's tests endure for so long that he winds up confronting a version of the planet cornered by the evil Emperor Zurg (James Brolin). Here, Lightyear will have no choice but to work with a ragtag group of wannabe Space Rangers, including Hawthorne's granddaughter Izzy (Keke Palmer), to save the day. Buzz already has trouble playing with others when they're experienced warriors, so you can imagine there's some difficulty in having this guy place nice with people like elderly convict Darby (Dale Soules) or the clumsy goofball Mo (Taika Waititi).

PIXAR movies are pretty well-known at this point for their ability to make even the most hardened grown-up viewers a blubbery mess of tears. Lightyear is a departure, then, for the studio in how it works better as zippy entertainment than poignancy. There are plenty of attempts at pathos here, and some tug at the heartstrings. However, they're not quite as impactful as they could be, possibly because several of them are oriented around broadly-defined supporting characters who usually function solely as comic relief. There's a reason Rex or Hamm didn't get solo tearjerker scenes in the Toy Story saga. Meanwhile, without getting into spoiler territory, centering the Lightyear plot on a job-oriented guy who sometimes forgets about the people around him can't help but inspire comparisons to Soul, with that familiarity further diluting the attempts at poignancy.

But while Lightyear won't make you wipe away tears, it does function quite well as a zippy sci-fi adventure. The best parts of the entire feature are where the focus shifts away from Toy Story references or pathos and just onto whatever new cosmic concept crept across the imaginations of screenwriters Jason Headley and Angus MacLane. Sequences built on entities like "Capture Cones" or TV dinners that cook if you shake 'em around aren't just fun, they're also details that could only exist in a sci-fi narrative. There's no desire to apologize for occupying this genre nor drag it down to gritty realism. Lightyear has no apologies about being silly and fun, which goes a long way to making its runtime enjoyable.

It also helps that the action sequences are a hoot. Much like fellow 2022 animated family movie The Bad Guys, Lightyear features extremely crisp editing and thoughtful camerawork whenever it's time for a chase scene or hand-to-hand skirmish. Free from the shackles that weigh down live-action sci-fi blockbusters like accounting for compositing live-action people against digital backdrops or even just the weight of cameras themselves, MacLane's filmmaking has an infectious sense of fun and zest to it. Plus, the planet Buzz and company are trapped on manages to have a whole slew of different environments to set exciting set-pieces against ranging from a darkened cave to lava fields to a massive spaceship. The variety of backdrops further helps in making the spectacle-driven scenes entertaining.

If there is a quibble to be had with the visuals, it's that setting a film in the furthest reaches of outer space still didn't inspire PIXAR to abandon its go-to visual aesthetic of cartoony characters set against ultra-realistic backgrounds. Lightyear is a gorgeous-looking feature, especially in its lighting choices, but slightly more stylized tendencies in the environments would've been welcome. On the plus side, there is some fun character animation here, especially with the comic relief character Sox the Cat (Peter Sohn). The animators find clever ways to convey tiny bursts of personality within Sox while still maintaining his appearance as a rigid robotic helper. A slight twitch of an eyebrow or a tilt of the head conveys a vivid personality within this mechanical feline without undercutting that he's supposed to just be a piece of hardware.

Sox is also graced with one of the best voice-over performances of Lightyear courtesy of Peter Sohn. In just his latest comedic supporting turn in a PIXAR movie, Sohn makes sure to leave behind his past roles and concoct an enjoyable persona for this feline. The infectious gusto of Keke Palmer as Izzie is also a joy while Dales Soules steals the show with her hysterical line deliveries as Darby. Unfortunately, Chris Evans can never quite fully leave behind images of Captain America in his voice work as Buzz Lightyear. He's not bad in the role and his lack of cynicism or snark in his performance is fitting for the overall tone of Lightyear. However, someone a little less famous, or at least Evans being directed to not sound so reminiscent of Steve Rogers (he's much more than that role, after all), would've helped to give this iteration of the character a more distinct personality.

Evans frequently calling to mind Captain America is emblematic of how Lightyear sometimes can't escape the gravitational pull of the movies that came before it. Most notably, it can get too bogged down in Toy Story fan service, while its adherence to both the default animation style and pathos-heavy narratives of past PIXAR movies is an issue. Luckily, Lightyear does largely deliver as an enjoyable action romp, one with enough robots, laserblasts, and lively characters to keep you plenty entertained for 100 minutes. It's not a modern PIXAR classic on par with Soul or Turning Red, but contrary to what its reference-heavy opening scene would indicate, there's some real fun and standalone charms to be had with Lightyear.