Fire Island is a comedic vacation you can't miss 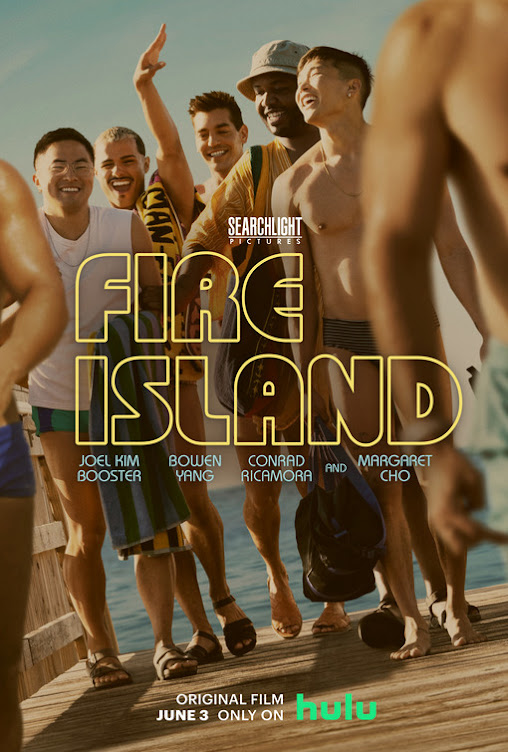 One of the many reasons that the HBO Max program Our Flag Means Death caught on like wildfire earlier this year was because it was just the kind of pop culture property queer viewers had spent years pining for. Here was a production where basically everyone was queer, with their sexuality and genders not being solely defined by bigoted cis-het people. There was variety in their personalities while queer perspectives were the dominant ones in the frame at all times. Fire Island, a new comedy from director Andrew Ahn, is not the exact same thing as Our Flag Means Death (queer media can be varied in town and style, shocker shocker) but it does continue the welcome trend of making queer stories involving lots of varied queer perspectives in stories that aren't about coming out or dealing with intolerant relatives. Oh, and also like Our Flag Means Death, it's also very funny.

The titular location of Fire Island is a real destination just South of Long Island, New York. A go-to place for queer people just looking to get away and have fun, it's the location that best friends Noah (Joel Kim Booster, who also wrote the script) and Howie (Bowen Yang) go to every year with a larger gaggle of buddies. This year, Noah is so determined to get the forlorn and romantically yearning Howie laid that he's abstaining from any sex until his pal gets some bedroom action. However, given that Fire Island is based on Jane Austen's Pride & Prejudice, you better believe there's a lot of drama incoming, particularly regarding Noah's snap judgments of other people on the island.

Part of what makes Fire Island so great is how inviting its visuals are. Set during a hot summer weekend in New York, Ahn and cinematographer Felipe Vara de Rey lean into natural lighting and soft cool colors to make Fire Island look appropriately glorious. Even better, it all feels very lived-in and natural, Fire Island, unlike many modern comedies, doesn't look like it was filmed against green screen or captured exclusively in tight claustrophobic close-up shots. Instead, there's an authenticity to the imagery that ensures that you can practically feel the sweat forming on your forehead or smell the aroma of sunscreen simmering on your arms. Opting for wider shots opens up the door to some great visual gags, but it also has the benefit of letting us see the central friend group being casual and having fun together.

The latter visual detail really cements the warm and fuzzy bond these people share in their little found family. That element of the script may be the most profoundly welcome and poignant aspect of Booster's screenplay. While we have multiple movies about Gerard Butler saving things that have fallen, American cinema is woefully short on entertaining features explicitly about gay found families. It's so nice to see something like Fire Island so often center itself around the perfectly imperfect bonds formed between queer people, especially since there's a welcome lack of cynicism in its approach to this topic. Fire Island doesn't feel the need to make snarky meta-remarks to justify getting schmaltzy about this concept, it instead has the confidence to just show affection towards queer friendships.

Best of all, though, Fire Island is a really funny feature and one that benefits mightily from Booster's screenplay. This script gives wildly different personalities for each of the central characters and watching these disparate and distinct demeanors ram into one another over the course of the drama-heavy weekend is exceptionally humorous. Especially entertaining in this regard is Conrad Ricamora as Will, whose tight-lipped guy speaks with the voice of Ty Burrell and has the serious-minded aura of John Malkovich. Watching his strikingly-defined performance collide with the snarky and boisterous Noah is a hoot, especially once the two begin hanging out more and Noah begins to discover even more sides to Will.

There's no such thing as an absolutely perfect vacation spot, and the same is totally true of Fire Island, which has its own downsides, including some gratingly didactic dialogue spelling out the character defects of Noah. But the quibbles are largely outweighed by the fun and entertainment here thanks to Fire Island pelting viewers with rays upon rays of sizzling laughs and irresistible queer camaraderie. The only fatal downside here is that Fire Island shouldn't be debuting exclusively on Hulu. A film this well-shot and hysterical should be seen on a massive screen with a bunch of your pals. Oh well, even in the confines of streaming, Fire Island emerges as one of the stronger comedy movies of 2022 so far.