You won't need any luck to enjoy Good Luck To You, Leo Grande 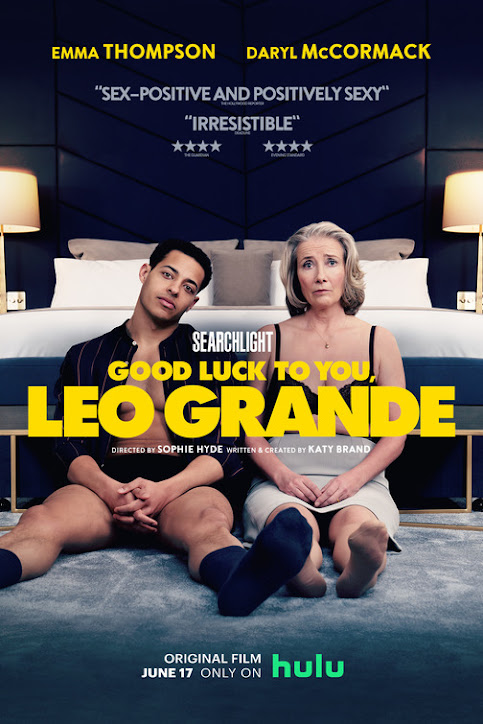 Sex. Even in the modern world, it’s a word that send shivers up the spines of so many people. Largely informed by religion standards for “proper” behavior, the demonization of human sexuality adversely affects so many. These include the broad perception of sex workers and women, who are never supposed to think of sex as something freeing, exciting, or a way to reflect their own agency. It’s doubtful Good Luck To You, Leo Grande, a new indie movie debuting on Hulu, will shatter all these harmful notions in mainstream society. What solitary feature could? But it’s lovely to see a piece of cinema fighting against those norms and also being so fun to watch at the same time.

Nancy Stokes (Emma Thompson) just lost her husband. His passing was sad, but it also led Stokes to realize how little she’d lived during their decades of marriage. Specifically, she’s never been sexually pleased once in her life. That’s about to change now that she’s hired Leo Grande (Dylan McCormack), a sex worker, for a session of passion in a hotel room. But more than just physical intimacy occurs in this space, as Stokes discovers somebody she can talk to about matters she never thought she could open up about. One session leads to another, with a friendship beginning to blossom between the duo. Sex is a wonderful thing. So is getting to know and care for somebody.

Screenwriter Katy Brand and director Sophie Hyde realize Good Luck To You, Leo Grande as an intimate enterprise. This is a movie almost exclusively confined to two people in one hotel room. This choice must’ve made this an extra easy movie to film during the COVID-19 pandemic, but there are more rewards to this scope than just making principal photography easier. It also helps make the central backdrop of the movie function as a kind of oasis from a harsher judgmental world. Our two leads talk about the difficulties they face out there in mainstream society, it’s not like the outside world is ignored. But restricting this screenplay to a singular location detached from that realm allows the focus to remain on these individuals and their experiences.

Such focus is also felt in the quietly detailed camerawork. Often, Nancy is captured in wider shots meant to emphasize that she’s overwhelmed by the wider world she inhabits. This visual motif means that whenever Hyde opts for a close-up, it lands with an intimate impact. We’re suddenly up close and personal with a woman who's been told to never let anyone into her own personal world. Good Luck To You, Leo Grande is not a flashy project, but it shouldn’t be considering the material it’s covering. Plus, there are still thoughtful instances of direction and cinematography throughout the feature that ensure that, just because the movies low-key, doesn’t mean it’s being assembled in a lazy manner.

Even more impressive than these visual flourishes is the writing from Brand. Thankfully, this movie's dialogue does what any movie this restrained should do: entertain. The pronounced contrasting personalities between our two leads turn out to be plenty of an interesting bedrock to build a cinematic house upon. Even better, Brand keeps injecting small cheeky details into the banter between Stokes and Grande, namely little comments that reaffirm how Stokes is an older white lady. Her intentionally abrupt diatribe that the men in Grande’s generation need a war to make themselves tougher is an especially good example of this. Committing to that kind of verbiage just makes these people seem so extra real, not to mention opening up further enjoyable opportunities for comedy.

Much like the dialogue, the acting is going to be under extra scrutiny in a movie as small-scale as Good Luck to You, Leo Grande. Luckily, this feature doesn’t have to worry about that with Emma Thompson around. Shocking nobody, a woman who was able to unearth genuine human emotion in Men in Black 3 is a riot in a grounded tale like this one. Flawed, relatable vulnerable, and armed with a wit that’s quick but not so sharp it upends your perception that Stokes is a real person, Thompson is a marvel here. More than holding his own in this two-hander is Dylan McCormack, who proves especially engaging in peeling back further complicated layers to Leo Grande as the movie goes on.

All these delightful qualities combine to make Good Luck to You, Leo Grande a grand example of a film that sneaks up on you in terms of how much you enjoy it. The story may not go down the most unexpected pathes but it's difficult to complain considering how entertaining the central rapport is and how well-earned the moments of poignancy are. Best of all, the frank attitude about sex, especially regarding the sexual agency of older women and the perspective of a sex worker, is an utter delight to see. A feel-good movie that doesn't trade depth for easy crowdpleaser moments, Good Luck to You, Leo Grande is an utterly remarkable title. We should all be open more open to talking about sex, just as we should also all be open to talk about movies as good as this one.