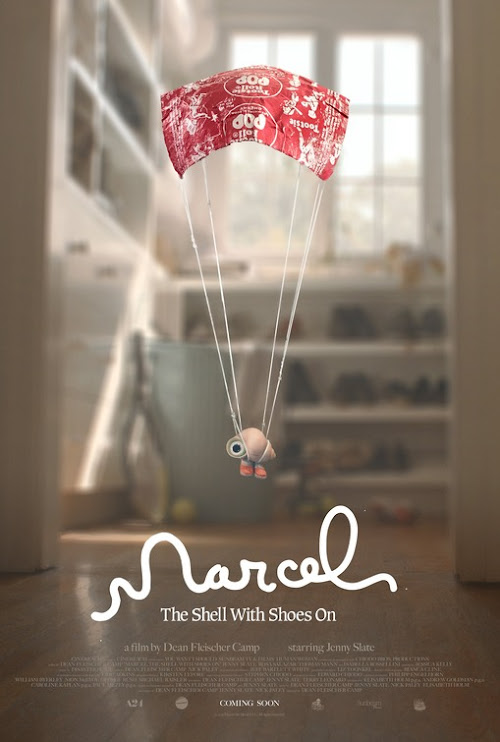 A sentiment I've often heard from artists and filmmakers working on animated features is that they want their work to be so good that it makes the audience forget they're even watching something animated. It's an understandable inclination given how many preconceived notions about this medium that the general public carries. People tend to think animated storytelling is, among other shortsighted notions, exclusively the domain of either kid's entertainment or adult animation told with an excessively repulsive art style. To make something that's so engaging you forget it stars animated organisms, would be a fantastic way to melt down such ill-advised conceptions of animation. In the process, you can remind people that this is simply just another way to tell engaging stories.

I was reminded of this oft-repeated ambition whilst watching Marcel the Shell with Shoes On, a new film from director Dean Fleischer-Camp that expands on a 2010 short film of the same name. Midway through this feature, I realized I had totally forgotten Marcel (Jenny Slate) and his grandmother, Nanna Connie (Isabella Rossellini) were animated characters. I was just so wrapped up in them doing simple things like talking that it had failed to cross my mind that I was watching masterful stop-motion animation at work. That's the power of animation right there, making the unbelievable physically and emotionally tangible.

In Marcel the Shell with Shoes On, Dean Fleischer-Camp (played by himself) stumbles onto Marcel and Nanna Connie while staying in an Airbnb. These two little shells used to be part of a large collection of shells that called this place home. Unfortunately, when the old owners of the domicile separated, Marcel and Connie were left behind. Now surviving on their own, Fleisher-Camp gets to discover what a unique day-to-day life the duo lead. In fact, he finds it so compelling that begins to film everything involving these people, hence the mockumentary format of this motion picture. Once Marcel's exploits begin to take off online, this tiny shell begins to wonder if it'd be possible to go on a journey to recover his lost family.

"Incidentally insightful" is the best phrase to describe the overall atmosphere of Marcel the Shell with Shoes On. This is a movie whose entire aesthetic follows the vibe of Marcel's speaking style; quiet, not drawing attention to itself, but often with something thoughtful to offer. This is a story about the necessity of change, no matter how scary it may seem. This heavy concept is communicated in a quiet, touching manner as Marcel clings to everything he's still got after losing his family. With this concept grounding the proceedings, the screenplay by Fleischer-Camp, Slate, and Nick Paley ensures that a YouTube video can be translated into a proper feature-length movie. This exploration is told with a gentle hand, one that makes watching Marcel the Shell with Shoes On akin to getting a big warm hug that you never want to leave.

Through this approach, the writers are able to unearth moments of insight in quiet, seemingly throwaway moments of Marcel and Connie's existence, which feel all the more intimate and powerful when captured through camerawork mimicking documentary filmmaking. Going for restraint is a boon for the pathos of Marcel, but it's also a great tactic for this production in terms of comedy. The wall-to-wall subdued filmmaking becomes a great way to wring extra chuckles out of innately funny imagery like a tennis ball being used by Marcel as a way to get around the house or dialogue about how Connie immigrated "from the garage". Marcel's understated line deliveries especially thrive in these confines. His nonchalantly matter-of-fact proclamations of misconstrued interpretations of how aspects of the world, like maps, work are constantly amusing thanks to Slate's downplayed vocals. Speaking of which, Slate's track record of great voiceover roles in the last decade culminates in her tremendous performance here in Marcel. At times, she's the lynchpin holding things together but she never sacrifices Marcel's childhood naivete even with so much on her shoulders.

Back to the restrained nature of the entire project, by not poking the audience in the ribs on what's supposed to be funny, Marcel the Shell with Shoes On is downright hysterical in some spots. The laidback nature of the piece also affords the melancholy crux of the whole movie an opportunity to be as fleshed out as possible. At its heart, Marcel is a film dealing with a heavy topic: a child grappling with feeling alone. With its emphasis on intimacy and quietness, Marcel's script offers up plenty of moments where the audience can feel the pent-up sorrows of the titular lead. This being a PG-rated film aimed at children, Marcel, thankfully, doesn't lapse into just being an avalanche of misery. However, it also believes youngsters deserve stories that don't shy away from depicting emotions its target audience will go through, like heartache or feeling isolated.

The faux-documentary style of Marcel the Shell with Shoes On is a big reason why such emotions and character details feel as vividly realized as they do. The innate structure of this project affords an opportunity for characters like Marcel and Connie to speak aloud their internal thought processes without these moments coming off as didactic. Plus, the intentionally ramshackle nature of the camerawork and even the 1.55:1 aspect ratio create an intimate quality to the on-screen imagery that makes one feel extra closer to Marcel and company. With these details embedded into Bianca Cline's outstanding cinematography, small scenes like Marcel sending off a paper balloon into the night sky become incredibly poignant.

Speaking of visuals, the efforts of Marcel's animation team, led by animation director Kirsten Lepore, also exacerbate the authentic pathos of the entire feature. Stop-motion is the perfect mold to realize Marcel and Connie, especially since this medium affords the characters such instantly tangible textures. Similarly impressive is their designs, which are so elegantly simple and make no effort at channeling "realism." These two organisms have clearly been designed from the ground up to evoke what the artists thought would look charming, not what would best emulate reality. Ironically, pairing such pleasing-looking figures with a script that can make your heart ache makes Marcel far more of a believably real being than any CG creation that ends up falling into the Uncanny Valley.

Combining such terrific character designs with a slew of great visual details (like how neighboring bugs are also realized through stop-motion) ensures that Marcel the Shell with Shoes On carries on the tradition of great stop-motion masters like Ray Harryhausen or Nick Park in making you transfixed by the unbelievable. The animation of this film will dazzle your eyeballs, while its touching script ruminating on how frightening change can be will doubtlessly touch your soul. No wonder I found myself forgetting that Marcel the Shell with Shoes On was animated while watching it. While an accomplishment as a feat of stop-motion wizardry, the visuals are so engaging that they just become another part of a moving yarn. Leave it to a little shell to remind us all of the enormous possibilities of animated storytelling.

Posted by Douglas Laman (NerdInTheBasement) at 9:36 AM