The Worst Person in the World is absolutely the best 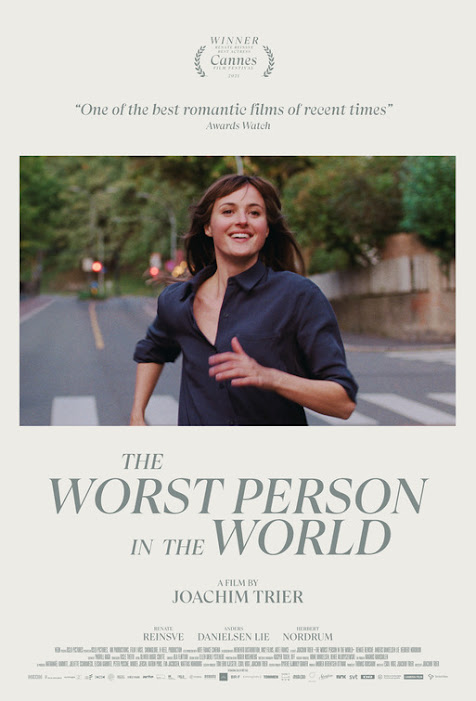 One of the most affecting moments of BoJack Horseman comes when the titular character is talking to his prospective daughter, Hollyhock. They're sitting next to his pool and after a moment she asks him if "that voice...that tells you you're worthless and stupid and ugly...it goes away, right?" BoJack proceeds to tell her yeah, which inspires a slight smile on her face while BoJack just looks away with pain consuming his expression. He knows the truth. That voice isn't limited to your teenage years. Adulthood is full of insecurities. Whether you're measuring yourself up to society's expectations, the accomplishments of others, or even just what you wish you could see in yourself, you'll often feel like you're never enough. It's all enough to make you feel like...The Worst Person in the World.

Taking place in Oslo, Norway, The Worst Person in the World follows Julie (Renate Reinsve). As the story starts, she's decided to pursue a career in psychology. After going to college and then scoring a relationship with one of her professors, she adjusts career paths to photography. This takes her through a handful of lovers until she gets into a committed relationship with comics writer Aksel (Anders Danielsen Lie). From here, Julie navigates what she wants out of life now that she's turned 30 years old. Who does she love? What passions does she have for her career? Does she even want kids? Life is messy and so is Julie as she tries to figure out what she even wants her life to look like.

The simplest charms draw you into the world of The Worst Person in the World while the deeper contemplations of the screenplay by Eskil Vogt and Joachim Trier (the latter of whom also directs) keep you glued to the screen. The former elements come about as a byproduct of Julie steering herself through the quagmire that is adult social situations. Reinsve's performance is remarkable in conveying subtle comedy just through facial expressions or the way she delivers dialogue. These gifts become apparent as her character experiences situations like loud children at a big gathering or when she pretends to be a hotshot doctor to guests at a wedding she crashes. No matter what Julie gets into, Reinsve is there to lend a sense of skillful comic timing and especially authenticity.

Her initial scenes with Herbert Nordrum as Elvind, a man in a committed relationship she runs into at a party, are especially delightful from both a performance and writing standpoint. Vogt and Trier's writing finds such amusing and creative ways to depict these two flirting with one another while trying to exhibit a determination to not cheat on their respective partners. Their writing works so well that they're able to make a fart work simultaneously as a humorous gag and an instance of emotional bonding! Reinsve and Nordrum have such good chemistry here, all of it built on unspoken feelings and sexual attraction, that just the sight of them chilling on a bed together fully clothed grabs your eyeballs. This section of The Worst Person in the World is emblematic of the kind of performances and attention to detail the whole movie provides.

From here, Trier's directing keeps coming up with unforgettable ways to visually realize the indecisiveness that grips Julie's mind. A sequence depicting the character running around a version of Oslo where everyone else is frozen in place is full of terrific moments while deftly combining the atmospheres of melancholy and romantic yearning. A later drug trip scene blends hand-drawn animation with live-action players against an unsettling primarily darkened backdrop. Combining such distinctive details creates an eerie and evocative largely exploration of Julie's psychological vulnerabilities, one rendered largely without dialogue. Who needs words when the imaginative imagery on-screen can say so much?

This particular set-piece is a great example of how well the unflinchingly messy nature of Julie is realized on both a screenwriting and performance level. Sometimes, it can feel like movies (especially ones written and directed by men) believe the very act of a woman having messy hair or being uncouth is enough. This can reduce the depiction of flawed women as a novelty, something that exists only to "disturb" rather than as a way to examine women as multi-faceted people. That's not the case here, though, with Vogt and Trier using Julie's flaws as a way to explore this woman on a deeper level rather than just leaning on the "shock value" of a woman eagerly gulping down magic mushrooms.

The deeper nature of The Worst Person in the World isn't just reflected here, but also in later sections of the story (the movie is split into 12 segments, plus a prologue and an epilogue). This is where a greater level of tragedy seeps into the story, with a key supporting character taking on whole new dimensions a a result. It's a story turn that, in the wrong hands, could've felt like a contrived melodramatic detour, an undermining of the hangout vibes that had defined so many of the best preceding sequences. But by keeping everybody's reactions to the devastating events subdued, this narrative development feels so natural, especially in its contemplations on mortality.

This is where the movie's ruminations on what defines a fulfilling life come to a head and it's no spoiler to say that The Worst Person in the World does not offer a solid answer to that question. Much like "that voice...that tells you you're worthless and stupid and ugly", insecurities over whether or not we're doing enough with our lives never fully vanish, no matter what age we reach. Instead of attempting to provide a treacly solution to these woes, The Worst Person in the World wraps viewers up in a soft hug and tenderly whispers that they're not alone. Maybe that's enough to make life seem a bit more manageable, at least for now. It's certainly more than enough to make for a great movie.