"Darkness!" and "No Parents" actually serve The Batman well 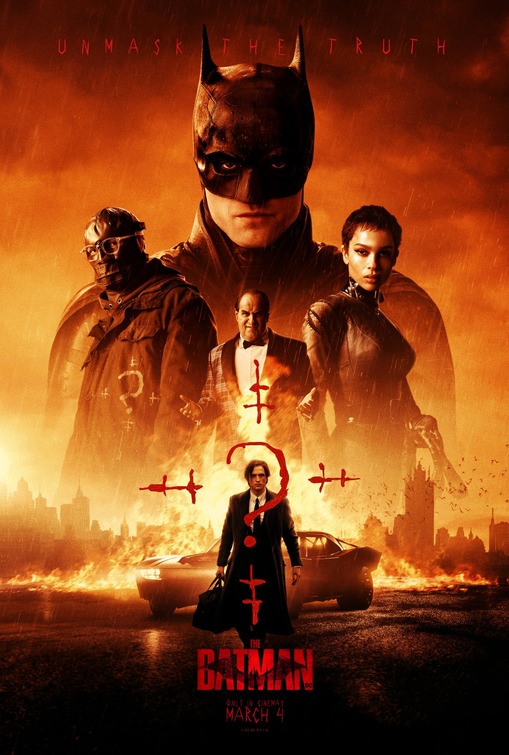 With eight different live-action movies starring Batman (and that's not even counting the two projects headlined by Ben Affleck's version of the character) already in existence, it's understandable to wonder what exactly The Batman is bringing to the equation. What is it doing to justify its existence beyond giving Warner Bros. a new opportunity to sell more Batman action figures and lunchboxes? Director Matt Reeves, who also penned the screenplay alongside Peter Craig, has opted to go in interesting directions with this project, and not just by making it the second time in pop culture history that Batman and the hymn "Ava Maria" have been put together.

No, the biggest point of distinction here is by making The Batman a mystery thriller first and foremost. The World's Greatest Detective finally gets a movie based largely on those skills, to the point that big-scale action sequences are limited to just two large set pieces. The result isn't something that can entirely shake off the past or live up to all of its ambitions but is more entertaining than expected given how familiar the Batman series has become.

The Batman begins with Bruce Wayne/Batman (Robert Pattinson) being two years into his tenure as Gotham City's vigilante. He doesn't just strike terror into the hearts of thieves, even everyday Gotham citizens are as terrified of Batman as they are of potential muggers. As Wayne pours everything into his Batman exploits, a killing spree of high-level Gotham City personnel begins. The culprit behind these slayings? A mysterious masked figure known only as The Riddler (Paul Dano), a Zodiac Killer pastiche who coughs more than a chain-smoking version of General Grievous. Wayne will need to be at his sharpest to dig up the clues and find out what's fueling The Riddler's rampage. Intersecting in this mystery is Selina Kyle/Catwoman (Zoe Kravitz), who has her own agenda in tackling the criminal underbelly of Gotham City.

Each Batman movie approaches the dichotomy between the Bruce Wayne and Batman personas in different ways. For The Batman, the latter identity is the one we're introduced to first, with Wayne eventually revealed not as a guy putting on the act of a billionaire playboy, but as a ghost. This guy saunters around his domicile in oversized hoodies, pain in his eyes, remorse fueling his behavior. A figure who strikes terror at night is just a broken shell of a person in the daytime. The heavy contrasts between the two sides of The Batman's protagonist are immediately interesting, especially since Pattinson does great work differentiating the two in terms of physicality.

Taking a cue from Rick Altman’s essay "The American Film Musical as Dual-Focus Narrative," which suggests that musicals are defined by parallels between musical numbers, The Batman creates intriguing visual parallels between Batman and Bruce Wayne. They'll inhabit the same environments, but with starkly different body language or lighting to suggest their differing outlooks.  An especially fascinating example of this dichotomy comes during a sequence where Wayne runs into people like Commissioner Gordon who’re strangers to this billionaire playboy, but familiar allies to Batman. The haunting loneliness of his life comes to the surface here, as he and the audience realize how even his "friends" don't really know him. Emphasizing the disparity between the two halves of this superhero lends The Batman some of its most quietly thoughtful moments.

Duality manifests in interesting fashions throughout the piece, including pieces of camerawork meant to intentionally confuse the audience on whether we're seeing things through the eyes of Batman or The Riddler. These shots, as well as how certain moments are framed through windows or from far-away positions, convey a sense of voyeurism, as if The Batman is transporting the viewer into the observational gaze of its hero and villain. This and other similar visual touches being well-realized through the direction of Matt Reeves and cinematographer Greg Fraser. Even when duality is put on the backburner, both of these men do commendable work throughout The Batman in making this look like a handsome production. Particular kudos the team behind this film for realizing the handful of fight scenes in a visually cohesive way. These skirmishes all take place at night, but Reeves and Fraser make sure you always understand what's going on on-screen and why.

Amusingly, most of the cast feels like they’re each inhabiting different movies, which weirdly fits for how Gotham is supposed to be a jagged disjointed community where nobody trusts each other. Jeffrey Wright’s take on James Gordon feels like he got lifted from a 1990s crime thriller, Zoe Kravitz is doing a femme fatale straight out of Laura, while, most amusingly, Collin Farrell plays Oswald Cobblepot like a 1950s gangster. This comes complete with the character saying “hoid” instead of heard. Alas, Farrell's Penguin does not ever say "five chubby digits," so The Batman automatically gets demoted a star. Thankfully, The Batman offers up plenty of opportunities for Robert Pattinson to utilize his enormous talents as an actor. He's great as the titular superhero and he does fine subtle work in making sure that he's not retreading ground from prior incarnations of the character.

Pattinson and the other cast members are inhabiting an aesthetic that's grim, but not necessarily realistic, which is a compliment. The aim here seems to have been mimicking the tactility of Christopher Nolan’s Batman films, but combining it with the expressionistic visual touches of Tim Burton’s tenure in the franchise. For instance, Bruce Wayne doesn’t just live in a mansion anymore, the interior of his home is like a gothic castle straight out of Crimson Peak. Fraser's cinematography frames these and other environments with bold camerawork emphasizing wide shots, rather than more intimate framing evocative of cinema verite. Not all of its visual touches are 100% original, but as executed here, they lend a nice stylized air that ensures the production doesn’t get weighed down with anchoring everything in realism. Happily, the lavish visual touches are complemented by a great lively score by Michael Giacchino.

Despite being a well-crafted endeavor that offers lots to chew on, The Batman does have its share of frustrating shortcomings. It's hard to dive into them getting into spoiler territory, but for one thing, it's disappointing that this is yet another major Hollywood blockbuster that tiptoes around relevant sociopolitical issues but refuses to get into more uncomfortable topics like systemic racism (save for one line form Kyle gesturing at white privilege). Similarly discouraging is that The Batman's homages to film noirs mean maintaining the limited roles for women from classic entries in this genre since there are only two prominent ladies in the whole script. Heck, some noirs, like Pickup on South Street, even had better and more varied roles for women 70+ years ago! The works of Matt Reeves have often struggled to deliver weighty parts for ladies, but it's a shame that didn't get improved on here.

There are also some smaller, but no less important, gripes to be had with details like Batman's opening narration sounds too much like Rorschach's inner monologue or a section of the second act involving Wayne interacting with Carmine Falcone (John Turturro) that feels too much like an unnecessary digression. For the most part, though, The Batman delivers nicely as an enjoyably atmospheric grim crime thriller that keeps you guessing and engaged (yay for earning that prolonged runtime!) Even better, it also isn't afraid to embrace fun comic book-y details of Batman's lore like Catwoman throwing a whip around or all the excitement that can be had with the Batmobile.

The Batman aims high to deliver both a grounded mystery thriller and something that fits snugly into the Batman mythos. Impressively, Reeves manages to pull that combo off with finesse. It's not a game-changing entry in the franchise and it's easy its pervasively dour tone being something some people won't want to sit through three hours for. But if you've liked Batman movies before this, The Batman will be up your alley while even those left cold by past installments will be won over by the unique touches and commitment to thoughtful storytelling.

Still not as good as The LEGO Batman Movie, though.