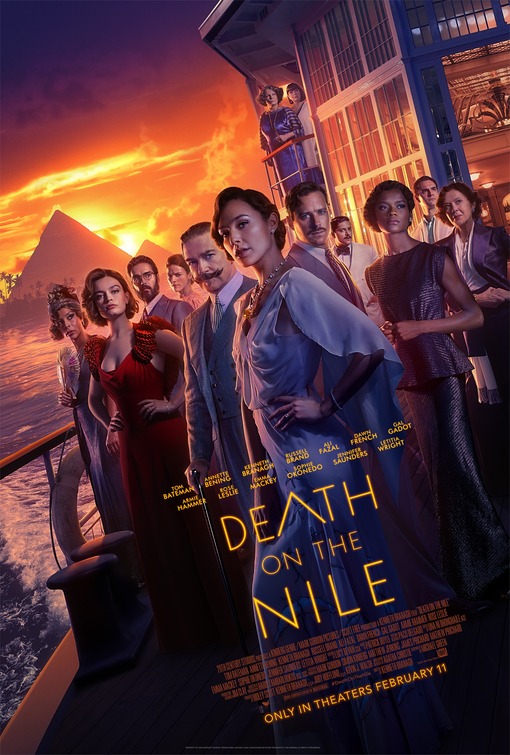 Not even a pandemic could keep the great detective Hercule Poirot away. The fictional mystery novel character that Agatha Christie created back in 1920 has had several cinematic incarnations over the years. The most recent has been a take performed and directed by Kenneth Branagh that premiered in the 2017 film Murder of the Orient Express. Turning into a tidy box office hit, it was only a matter of time before Branagh set his sights on adapting another one of Poirot's countless literary escapades. Though several different factors (including Branagh's commitments to a role in Tenet and the COVID-19 pandemic) kept on delaying a follow-up, such a project has finally arrived in the form of Death on the Nile.

After a prologue detailing Poirot's time in World War I, Death on the Nile picks up in 1937, with this detective on an overdue holiday in Egypt. A chance encounter with old friend Bouc (Tom Bateman) at the pyramids of Giza leads to Poirot get invited to a sizzling wedding between Simon Doyle (Armie Hammer) and Linnet Ridgeway-Doyle (Gal Gadot). It's all a big party full of extravagant gestures, including taking all the guests on a boat on the Nile. Glitz turns to gruesome, though, when a murder occurs on this boat. With each of the people onboard harboring some kin of grudge for the deceased, Poirot must spring into action. It's time to solve another murder before this killer can strike again.

An unexpected benefit of Death on the Nile is how it makes one appreciate a tiny but significant detail about Knives Out. I never truly absorbed it before, but that Rian Johnson movie ingeniously kicks off with the inciting murder. That's a perfect beginning for a murder mystery. The corpse has been established, now we can get to the fun stuff where a detective parses out all the motives behind the assorted suspects. Johnson wastes no time in his script, with the only drawback to this clever structural touch being that it makes the pacing issues in something like Death on the Nile more apparent.

Screenwriter Michael Green dedicates this movies first half to table-setting, which wouldn't be bad except the individual here function much better as murder suspects than people in a hangout movie. Very arch character dynamics are rehashed over and over again while everyone, including the sleuth himself, talks in ham-fisted dialogue about the internal angst Poirot deals with on a daily basis. Branagh and cinematographer Haris Zambarloukos also shoot these early sequences in a tepid fashion. Despite featuring some lavish costumes and potentially glamorous locales, simple dialogue exchanges are framed with little imagination while the poor green-screen work proves distracting.

Once the murder happens, though, Death on the Nile does finally get some life. It doesn't turn out to be the second coming of Knives Out, but Branagh is much more comfortable doing a melodramatic mystery than he is with the more restrained conversations that have dominated the film up to this point. Striking uses of shadows and darker lighting populate the scenes where Poirot grills potential murder suspects. Meanwhile, unique spaces on the boat, namely a meat freezer to store the corpse, provide appropriately claustrophobic backdrops for these interactions. Green's script sn't impossible to crack in terms of what's going on, but he does keep things well-paced and isn't afraid to lean into enjoyably showy executions of big twists and turns.

The high drama of this section of the story is also a boon for several of the actors, who excel with much jucier flamboyant material. Sophie Okonedo is my pick for the movies MVP as blues singer Salome Otterbourne, she's a lot of fun with her "I do declare!" accent and a strong sense of conviction. Really, Death on the Nile is at its best whenever it decides to let its freak flag fly, particualrly in a bunch of sexually aggressive dancing in the film's opening scene. So often Death on the Nile opts to play things in a monotone manner that these instances of sudden sexuality or flowery acting stand out in an entertaining fashion.

Death on the Nile isn't good enough to suggest that Branagh's take on Poirot should run for countless installments. However, once it gets to being a murder mystery, it's a reasonably competent entry in the genre that'll deliver what audiences want. Maybe next time, though, take a cue from Knives Out and just start things off with a murderous bang.

Posted by Douglas Laman (NerdInTheBasement) at 9:12 AM