It's best to promptly leave No Exit 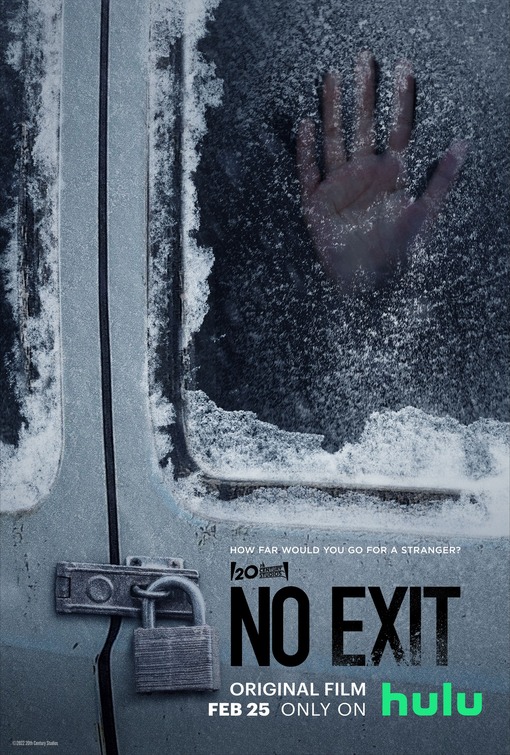 The modern age of streaming movies dictates that such titles emulate the kind of fare you could see on the big screen. Of course, this varies in execution. There's been plenty of discussion over Netflix movies looking cheap or why Netflix's mandate for all films to be shot with Ultra High-Definition cameras ends up making its original features look off-putting. However, conceptually, projects from Netflix and other streamers typically want to evoke the kind of projects you'd normally have to drive to a Cinemark to see. The new Hulu title No Exit, then, is a departure from these norms as its scale and storytelling would've been right at home as a CBS original TV movie in years past.

No matter whether it aired on the big or small screen, though, nothing can disguise the fact that No Exit doesn't work as a thriller.

Adapted from a short story of the same name by Taylor Adams, No Exit begins with Darby Thorne (Havana Rose Liu) receiving the news that her mother has been taken to the hospital in critical condition. The problem, however, is that Thorne is in court-mandated rehab, she can't leave to visit her mom. It isn't long before Thorne makes a quick escape and steals a car in order to get to her mom. However, a blizzard derails her plan and she's soon forced to wait out the storm in a nearby rec center with four other people. While wandering around outside in the parking lot, Thorne discovers a girl tied up in somebody's truck. One of the four people inside is not who they seem and the revelations are only getting started.

Limiting your movie to one location and a small cast has inspired gripping filmmaker from other directors. In the case of director Damien Power and screenwriters Andrew Barrer and Gabriel Ferrari, the stripped-down setup of No Exit has only inspired monotony. Part of the problem is that the plot loses track of Thorne's central struggle of dealing with addiction. Once she gets to the rec center, her sickness as well as her quest to get to her mom become secondary to the little girl she's stumbled on. Barrer and Ferrari fail to capsize on several intriguing opportunities to intertwine this predicament with Thorne's interior life. As a result, there's no central character to get invested, no personalities that can distinguish this from other similar thrillers.

It's also puzzling how quickly the central mystery of whose kidnapped the girl taken care of. What should be a driving engine of suspense instead sputters out without much fun or excitement. This issue goes hand-in-hand with the similarly fatal flaw that you can guess who can be trusted and who can't from the get-go. No Exit doesn't even have the good sense to get weird and gonzo with its twists and turns. This is a movie too deeply on autopilot to liven up enough to deliver trashy fun or enjoyably over-the-top performances. A movie this self-conscious about being seen as ridiculous gets old awful quickly.

The closest thing to an inspired narrative detail in the whole thing is the genuine affection one of our villains has for another one of the adversaries. There's no financial reward or duplicity here, this evil guy actually cares about another human soul. Evoking the George/Lenny dynamic from Of Mice and Me or even the Robert Pattinson's character in Good Time, this rapport is the one part of No Exit that surprises, along with the hysterically miscalculated way Thorne's addiction returns to the movie. Otherwise, there's little in the way that's noteworthy. No Exit is so disposable that even its shortcomings are instantly forgettable.

The same sentiments can be expressed for the lackluster visuals of No Exit. Power's filmmaking is subpar all around, but it's especially disappointing how he fails to convey any sense of claustrophobia in Thorne's scenes where she navigates being trapped in a small scape with a potential kidnapper. Cinematographer Simon Raby lathers on the darkness in his camerawork, an attempt to convey moodiness that ends up just making it hard to parse what's going on-screen. Worst of all, talented character actors Dale Dickey and Dennis Haysbert are stuck with nothing roles, with the latter performer getting some of the absolute worst dialogue of the whole feature. They deserved more and so do viewers interested in entertaining thrillers. No matter whether it debuted at Cannes or on Hulu, No Exit would've always registered as an especially drab and unengaging movie.

Posted by Douglas Laman (NerdInTheBasement) at 12:30 AM