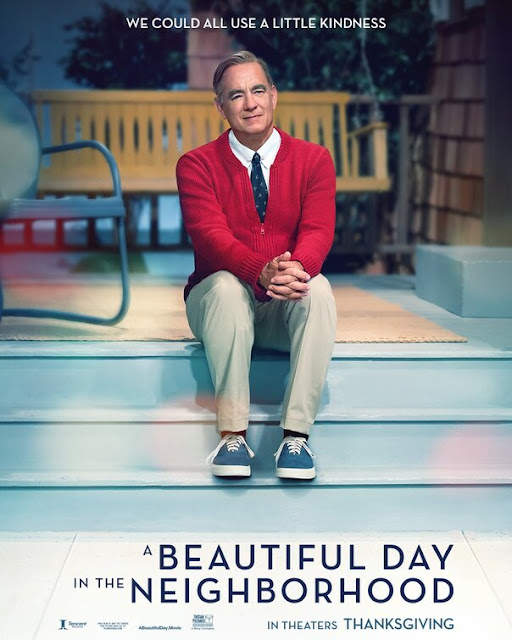 Though he's plastered all over the marketing, Tom Hanks' Fred Rogers is not the lead character of A Beautiful Day in the Neighborhood. Rogers is certainly a pivotal part of the movie and the visual trappings of his children's television show, Mister Rogers' Neighborhood, are also reflected throughout the production as well. But those expecting this Marielle Heller directorial effort to be a traditional movie biopic about Fred Rogers or any other kind of film exclusively focusing on this man will be disappointed. Heller and writers Micah Fitzerman-Blue & Noah Harpster have concocted something much more unique for A Beautiful Day in the Neighborhood that may not put Fred Rogers center-stage but certainly is influenced by the man and especially his worldview.


Based on an actual Esquire article entitled Can You Say...Hero? by Tom Junod, A Beautiful Day in the Neighborhood centers its focus on journalist Lloyd Vogel (Matthew Rhys), a take-no-prisoners writer who has some serious trouble getting in touch with his emotions, especially when it comes to his estranged father, Jerry (Chris Cooper). This makes Lloyd the last person you'd expect to write up a profile on Mister Rogers, but that's just what he's tasked with doing for Esquire. What starts out as just another writing assignment turns into something much more profound as the cynical Lloyd begins to realize that Mister Rogers is no facade, this children's television show host really is as nice he seems on the TV set.

Not only that, but Mister Rogers seems to be even more eager to learn about Lloyd than Lloyd is to learn about Mister Rogers. Through choosing to tell this story, one can see how A Beautiful Day in the Neighborhood has managed to crack one of the biggest challenges in making a Mister Rogers movie. Specifically, how do you make a realistic drama where Mister Rogers can function as a believable person. Surely nobody that nice can actually exist in a world as persistently grim as ours. By making a tale where we see Rogers through the eyes of a cynic like Lloyd though, we get to have the concerns of believability from the audience expressed by an on-screen character and then have Rogers gently show both Lloyd and the audience that, yes, there are indeed people this good in the world.

It helps too that Neighborhood isn't just committed to depicting the ultra-kindly demeanor of Fred Rogers. Equal levels of attention are given to the more relatable complex disposition of Lloyd Vogel, his own emotional problems are handled in a deft manner through the script by Fitzerman-Blue & Harpster. These writers aren't afraid to let Vogel's most tormented moments be actually troublesome. Fights at a wedding, leaving his wife & child in a time of crisis, Vogel's attempts to avoid confronting his emotional problems result in some starkly grim moments. As for the traumatic childhood events that have shaped his adulthood self are delicately handled so that we know just enough to understand how and why Vogel has gotten to the emotionally stunted place he is today.

It's said that Walt Disney used to say that for every laugh, there must be a tear, and A Beautiful Day in the Neighborhood approaches its own story with a similar sense of balance. There's plenty of moving moments throughout that don't hold back in exploring the troubled psych of Vogel and the focus placed on that part of the story makes the scenes centered on the hopeful worldview of Fred Rogers all the more moving. The former Vogel-heavy scenes are enhanced by director Marielle Heller's creative visual sensibilities that tend to reflect what's going on inside Vogel's mind in unexpected ways. Her use of visual elements associated with the Mister Rogers' Neighborhood TV show in these scenes is especially impressive in how they function as genuinely illuminating on who Vogel is as a person rather than as just plays for nostalgia.

As for the sequences heavily involving on Mister Rogers, Marielle Heller's consistently impressive and quietly creative direction also aids these sections of A Beautiful Day in the Neighborhood. But anytime Mister Rogers steps on-screen, it's Tom Hanks that gets to shine in what may honestly be one of his very best performances. On paper, the prospect of getting universally-beloved Tom Hanks to play similarly widely-beloved Mister Rogers sounds like one of those too-tidy pieces of casting that could never possibly live up to its potential. In execution, it truly is a match made in heaven. A few seconds into his very first scene, where Hanks as Rogers recreates the opening of Mister Rogers' Neighborhood, the idea of the figure on-screen being anybody beyond just Fred Rogers himself just vanishes away from your mind.

Tom Hanks just vanishes into this role and lends such a believably gentle & wise presence to anytime he shows up on-screen, especially in his carefully-executed line readings. Perhaps most impressively of all, Hanks makes Fred Rogers a distinctly human person with all kinds of little touches, like the way he delivers the lines where Fred Rogers opens up about the complicated relationship he has with his sons. Hanks is able to believably embody the sense of pure goodness that everybody loved about the real Fred Rogers, but he's also able to create a discernably human being in there too. It's a quality of his outstanding performance that quietly reminds both Vogel and the audience that Fred Rogers is no superhero, he's a person and every person is capable of spreading kindness. What a beautiful message so perfectly encapsulated both in the richly moving performance of Tom Hanks as well as in the newest home-run from director Marielle Heller, A Beautiful Day in the Neighborhood.
Posted by Douglas Laman (NerdInTheBasement) at 5:46 PM