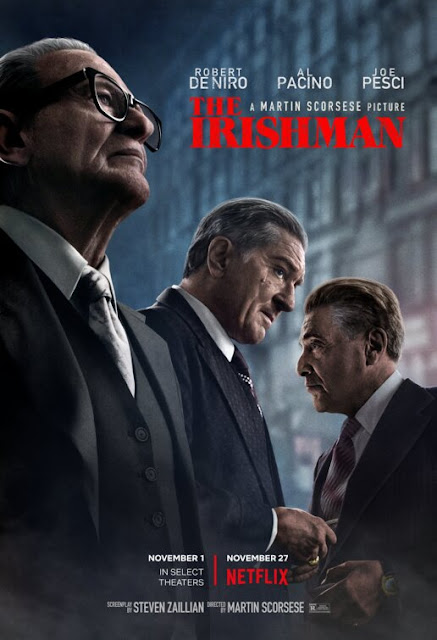 Early on in The Irishman, the film's titular lead character, Frank Sheeran (Robert De Niro), recounts a story about his time serving in World War II where he held two enemy soldiers at gunpoint while they dug their own graves. Sheeran, while telling this tale, puzzles over why the two soldiers were doing this task. "Did they think that, if they did a good enough job, they would be let go?" he ponders. Whatever drove them to dig those graves, it really didn't matter in the end, they ended up as corpses in the ground. Such a tale ends up being a parallel for the overarching story of Martin Scorsese's epic crime saga The Irishman, which is all about gangsters like Sheeran digging their own graves while ignoring the inevitable doom that awaits them.


Though Scorsese's dabbled in the gangster movie genre plenty of times before, Sheeran is actually quite a bit different from the typical protagonist we've seen in past Scorsese gangster movies like Wolf of Wall Street or Goodfellas. For one thing, the lead character of The Irishman is a horse of a different color compared to the protagonists we've seen in prior Scorsese gangster movies. Sheeran is never an ultra-wealthy kingpin in the world of criminal activity, he's not, say, a famous guy who hosts his own TV show in Las Vegas. On the contrary, Sheeran's mostly just a henchman, a spectator on the side of history. Prior to working in this position, Sheeran starts out his life as a truck driver before running into mobster Russell Bufalino (Joe Pesci), who eventually helps Sheeran get a foothold in the gangster business.

Eventually, Sheeran's work in this field leads him to becoming a right-hand man for major union leader Jimmy Hoffa (Al Pacino). Through working together, Hoffa and Sheeran develop a close friendship, one that provides a sense of stability in their line of work which is constantly being rocked by upheaval, betrayal and tragedy. That's another thing that differentiates The Irishman from its brethren in Scorsese's filmography, the more melancholy tone stemming from its reflective sensibility. Comparisons have been drawn between The Irishman and Synecdoche, New York and they're very much on the money. Like that Charlie Kaufman masterwork, Irishman is all about contemplating the vastness of life and how you choose to use it.

For the character of Sheeran, he chooses to spend his life being somebody who follows orders, no questions asked. As he says himself in voice-over at one point, it's what he did in the Army, why not do it for a living working for gangsters like Bufalino? When you spend your life doing solely what other people tell you to do, and especially when following orders means constantly serving up gruesome violence, what kind of life are you left with? What person do you turn into? How does this affect your relationship with your loved ones? Such queries are explored to fascinating effect in Steven Zaillian's screenplay, especially in the harrowing third-act that provides an unflinching glimpse at Sheeran in his most elderly years.

Thoughtfully xamining the long-term costs of committing oneself to a life of violence and misery informs every aspect of Zaillian's script, from the way Sheeran's violent deeds are handled in quick brutal doses rather than in a grandiose fashion that glamorizes his behavior to the extensive length of the project. There's been plenty of discussion surrounding the fact that The Irishman runs 209-minutes-long, but the fact is like with Richard Linklater's Boyhood, you need to go all-in on a prolonged length if you want to make a movie that truly captures the expansive scope of a single person's life. No surprise then that the movie totally commits to a runtime that truly flies right by given how The Irishman is a movie that's all about full-on commiting to bold creative decisions.

One such decision is another element of The Irishman that's generated plenty of pre-release discussions among many (myself included), the decision to digitally de-age the primary actors. As mentioned in my Gemini Man review last month, I've been predominately underwhelmed by most of Hollywood's attempts to digitally de-age famous actors. That means The Irishman is a full-on revelation for yours truly, I was utterly floored by just how good and convincing this film's digital de-aging is. Aside from some rubbery-looking shots of the youngest versions of De Niro, the visual effects wizardry used in the various time periods of The Irishman is incredible. The CGI used on Al Pacino's character is especially impressive, from the moment he stepped foot on-screen, I just bought that I was watching a human being, not an accomplishment of groundbreaking VFX work.

That's the highest compliment I can afford the de-aging effects in The Irishman, I totally forgot about them a few minutes into the movie. They're so utterly convincing (again, aside from some moments with the youngest versions of Sheeran) that you can just focus on the story itself. The VFX is used to enhance your immersion into the story rather than as something that can distract from it. Best of all, all of the de-aging technology never distracts from the barrage of phenomenal performances given by the trio of lead actors here, the most prominent of which is Robert De Niro. Playing a more restrained soft-spoken guy compared to many of his past Scorsese characters, De Niro beautifully captures the ever-growing sense of woe within Sheeran. It's a part of his performance that totally gets you emotionally right before he also turns right around and chills you to the bone you with his depiction of just how detached Sheeran is from the violence he dishes out.

It's a terrific lead performance to anchor the whole film as both Pacino and Pesci deliver similarly stellar work. God is it ever good to see Pacino delivering such boisterous work here. He's got an immensely magnetic quality to his work on-screen that perfectly uses his penchant for pronounced dialogue deliveries to authentically sell Hoffa as somebody who can stir up a crowd to their feet in cheers. For those wondering if Pacino also manages to be intimidating on-screen, just the scene where you can feel Hoffa escalating in internal rage as he exchanges terse words with a shorts-wearing Florida gangster will provide perfect proof of how well Pacino can set you on the edge of your seat effortlessly. As for Joe Pesci, he's doing remarkably restrained work here totally unlike anything he's done in prior Scorsese gangster movies. Though it's a departure for him compared to his prior Scorsese performances, the level of quality in Pesci's acting remains as high as ever.

Such tremendous performances, along with a murderer's row of memorable supporting turns (including Ray Romano as a charming lawyer), are done under the masterful direction of Martin Scorsese. Fifty-two years since his first very first feature film and Scorsese is still just as vibrant of a filmmaking force as ever. His camera never makes a move or is positioned without some kind of well-thought-out purpose behind it and the same sense of introspective woe that marks his best works (The Last Temptation of Christ and Silence, chiefly) is certainly alive and well here. Thelma Schoonmaker's editing is similarly still just as sharp as ever and proves crucial making the tension in scenes like Hoffa's wife preparing to turn on a car as nerve-wracking as they are. Sometimes, when you bring together film industry legends, the end result is not as good as the sum of its parts. In the case of The Irishman though, cinema icons have come together to deliver something that's truly like no other gangster movie Martin Scorsese has ever made.
Posted by Douglas Laman (NerdInTheBasement) at 1:52 PM