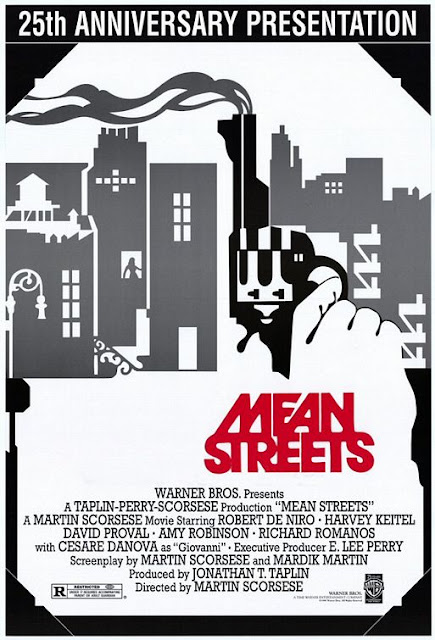 With The Irishman dropping on Netflix streaming this coming Wednesday, now seems like a fine time to look back at the very first time Martin Scorsese directed a gangster picture. Granted, his second feature film, Boxcar Bertha, had heavy crime movie elements to it too, but that was a romantic drama first and foremost. Mean Streets is 110% a gangster crime vehicle, the kind of movie Scorsese would go back to multiple times in his career. Despite being a recurring genre stop for him, Scorsese manages to make sure each of his crime films are different from one another, The Departed is not the exact same movie as Casino, for example.


By the same token, Mean Streets is also a different creature from its Scorsese crime movie brethren. The story of this particular feature concerns Charlie Cappa (Harvey Keitel), a gangster working in New York City whose life keeps getting tossed around by his pal John Civello (Robert De Niro). He and John go way back, their pals through thick and thin, but Civello isn't exactly trustworthy. He's the kind of guy who will borrow money from you one day and then deny that he's ever borrowed money from anybody ever the very next day. This combined with his erratic behavior is making every other gangster on the block nervous and is putting Cappa's potential for moving on up in the world of gangsters in jeopardy.

Cappa striking up an unexpected romance with Civello's cousin, Teresa (Amy Robinson), further complicates matters since Cappa has been given strict orders to simply observe her, not be a casanova around her. One way Cappa's life as a gangster differs greatly from the other gangsters Scorsese has followed in his other projects is the noticeable lack of voice-over narration. The protagonists of Goodfellas and its ilk delivered wall-to-wall narration that gave off the impression that they were talking directly to the viewer, inviting them into their world grisly world. It's a narrative device that allows for an easy method of delivering exposition as well as giving us a chance to explore the psyches of such frequently monstrous characters.

But in Mean Streets, Cappa doesn't get the chance to provide that sort of narration, which ends up creating a sense of intentional detachment between the characters and the viewer. Instead of feeling like we're getting a first-person perspective on being inside a casino run by a mobster, Mean Streets is filmed like we're accidentally watching something we shouldn't. There's an unsettling sense of discomfort to be found throughout the way Mean Streets is filmed which makes the awkwardness of certain conversations like an exchange between Cappa and Civello over the latter owing money incredibly visceral. Come to think of it, this style of filming tends to work especially well in making the character of Civello exceptionally unnerving.

Without any narration to ease us into what a livewire this guy is. Civello just rolls onto the screen all smarmy and weasely, endlessly talking over anybody who wants to chide him in his most reserved moments. The lack of more stylized approaches in either the script or the camerawork ensures that this personality is brought to life in an appropriately uncomfortable manner. All of that discomfort is something Robert De Niro's performance is especially skilled at, he can make the awkwardness of being around Civello so authentically-realized and the same can be said for how he approaches depicting the terrifying bursts of violence Civello engages in.

The down-to-Earth nature of Mean Streets (perhaps necessitated by this having a much smaller budget than most Scorsese movies) is also applied to exploring the mindset of the lead character, Charlie Cappa. This is especially apparent in a distinct piece of camerawork where the camera is perched on Cappa's chest as he walks around in a forlorn daze at a seemingly jubilant party. The psychological toll that all of this chaos is having on Cappa is felt vividly just in how this moment is filmed and Harvey Keitel captures that quality ably in his performance as well. Martin Scorsese's already impressively assured direction helps tie the whole endeavor together. With a production as engaging as Mean Streets, it's no wonder he would often return to the world of gangster fare in his directorial career.
Posted by Douglas Laman (NerdInTheBasement) at 3:43 PM