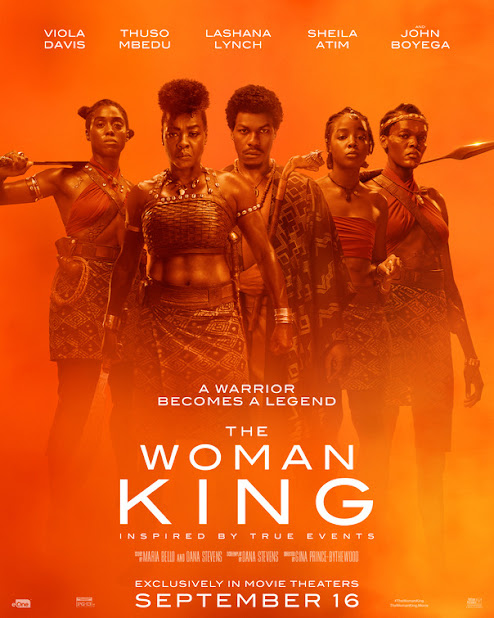 Director Gina Prince-bythewood knows how to make satisfying crowdpleasers. That's a much more difficult task than it may sound on paper. How many times have you watched a romantic drama that just laid there inert or just stared emotionless at the screen during a hollow action movie? By contrast, Prince-bythewood has often delivered the compelling character dynamics and creative manifestations of certain genre staples that make sure these films can live up to their potential. It's why her 2000 motion picture Love & Basketball was so absorbing or her 2013 romantic drama Beyond the Light was downright enchanting.  These titles delivered the emotions and narrative hallmarks you'd want out of these movies without coming off as mechanical or manipulative.

Gina Prince-bythewood is working with a bigger canvas than Beyond the Lights on The Woman King, but she's still got her knack for making features that leave your spirit stirred without sacrificing depth in the process. There are quibbles and nitpicks to be had here, but by and large, The Woman King is something quite exceptional.

Taking place in the West African kingdom of Dahomey in the 1820s, General Nanisca (Viola Davis) leads the Agojie, an all-women team of warriors who protect their land on behalf of King Ghezo (John Boyega). Nanisca and her fighters are aiding Ghezo in a cruel system wherein they capture violent intruders from rival kingdoms and sell them to European slave traders. It's a cycle of brutality that has no end in sight. Nanisca wants to find another way to survive. Just as she's plotting an alternate course for Dahomey, Nawi (Thuso Mbedu) arrives with a slew of other young girls to train as potential new soldiers in the Agojie. The path to fighting for Dahomey will be rough and Nanisca will have no mercy on potential new recruits. But soon, Nanisca will need all the help she can get as new evil forces begin to descend on Dahomey and its people.

The screenplay by Dana Stevens opts to capture the story of Nawi training with a classical story structure that evokes everything from sports movies to Captain America: The First Avenger. Any film about an underdog outsider having to come in and prove themselves on a physical level seems to have been a guiding star for the first-half of The Woman King. That may sound like a complaint, but it truly isn't. For starters, such plot mechanics endure for a reason, they can still be plenty stirring when executed right. Plus, they provide a familiar template for Stevens to establish unique character dynamics, such as the delightful rapport between Nawi and Izogie (Lashana Lynch).

Going this route narratively also allows for plenty of intimate sequences where we get to truly know these characters before they head out into battle against evil forces. Prince-bythewood's filmmaking, which has extensive experience with capturing low-key but important interactions between people, is especially solid here. She knows when to just let the actors, especially Viola Davis's rich performance, carry the scene while also understanding the need to make time for seemingly disposable moments, like Nawi bonding with two of her fellow trainees. What could've been observed as a throwaway moment by another director is rightfully seen by Prince-bythewood as critical to the overall movie. By the time we come to Nawi undergoing her final trial for a place among the Agojie (which is brought to life with some of the sharpest editing and camerawork in the whole movie), we're fully immersed in every step she takes. Such is the power of knowing how little character details add up to something big in terms of audience investment.

Admittedly, certain character beats work better than others. A prospective romantic bond between Nawi and an outsider to her society just isn't as rich as the scenes depicting her friendship with her fellow fighters. Whenever the two characters are talking, their dialogue feels especially predictable and I found myself squirming, wanting to get back to the kind of character dynamics The Woman King excels best at.

On a more positive note, The Woman King fares shockingly well in tackling weightier issues, namely putting the complicity of the lead characters in slavery front and center in the narrative, without sacrificing moments of excitement. Part of that comes from how Gina Prince-bythewood's framing of the fight sequences has some fun flourishes but don't totally eschew reality. When it comes time for grander set pieces, they still feel at home with the rest of the movie. These fighters aren't moving around on the battlefield like Legolas walking on air in The Hobbit, which certainly helps. Once again demonstrating the importance of balance, these set pieces are still capable of engaging in exciting heightened touches when the occasion calls for it. My personal favorite is Nanisca and Izogie's simultaneous response when the former character gets her sword shot out of her hand.

Even beyond the touches Gina Prince-bythewood brings in the director's chair, The Woman King also functions as a great showcase for the talents of its cast. There's not a dud performance in here, with Davis being the perfect deeply human anchor for this story. Lashana Lynch may be the standout of the entire ensemble, though,  even just for her gift for unforgettable facial expressions alone. Also emerging as an MVP is composer Terence Blanchard. The subtle details of his score add so much to the sweeping scope of this historical epic. All these talented artists have been given the space to really flex their muscles and give 110% in The Woman King and the results are downright remarkable.

It can be easy to take broadly-appealing crowdpleaser entertainment for granted, but with The Woman King, director Gina Prince-bythewood once again shows that it takes real craft to create something that makes you want to stand up and cheer. Oh, and having an actor of Viola Davis's caliber around doesn't hurt either.

Posted by Douglas Laman (NerdInTheBasement) at 11:14 AM