Barbarian is an entertaining and chilling romp best experienced unspoiled 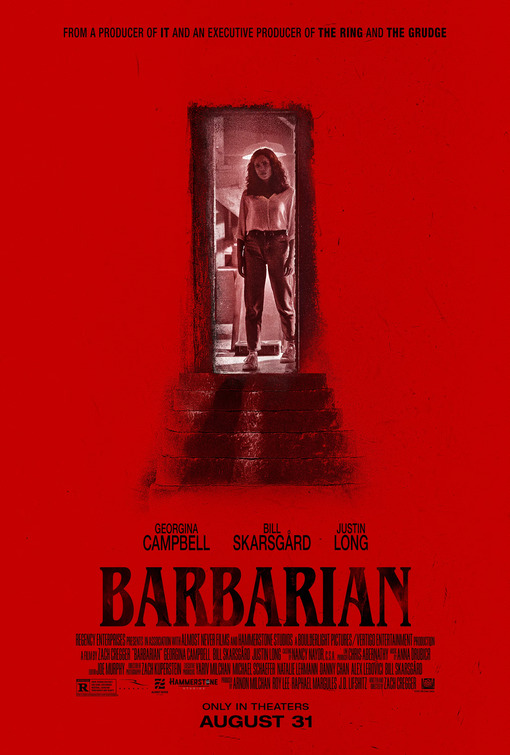 I don't really know where to begin reviewing a movie like Barbarian. Everyone whose already written lengthy paragraphs about this movie have been right to keep the surprises hidden since this is very much a horror film that thrives on shocking the audience with each new twisted layer in its web of scary storytelling. It's tricky to break down what makes Barbarian so good without giving away key surprises and reveals best experienced in a movie theater, but I'll try my best. But know this above all else; Barbarian is quite a good horror feature. It's always nice when a genre title comes out of nowhere from a lesser-known filmmaker to surprise us all with its wits and smarts, and that's just what's happened here.
Written and directed by Zack Cregger, Barbarian begins as Tess (Georgina Campbell) arrives at her AirBnB in Detroit, Michigan in the middle of a stormy night. With rain pouring down, Tess is excited to get inside...only to discover someone else is in the house. Keith (Bill Skarsgard) has already claimed the house through another website. Here, Cregger's screenplay kept me on edge with uncertainty over where the horror in this horror movie was coming from. A strange man is unexpectedly in your AirBnB, that alone is enough to make you feel uneasy. There's a thousand ways to interpret every one of his lines and actions. Is he manipulating Tess? Is he trying to be nice? Is he working for somebody? There's enough vagueness surrounding this character (whose played by, of course, Pennywise the Clown) that it keeps you guessing.

Soon, though, it becomes clear that there is something wrong inside this house, specifically in the basement area of the place. A handful of strange incidents lead Tess to do some poking around and...well, that's where the spoiler sensitivity kicks in. To say anymore about what happens once she gets curious would spoil the fun. Whatever's going on here soon entangles AJ Gilbride (Justin Long), an actor embroiled in controversy. He has no idea what lies ahead in this domicile and neither does Tess or the viewer for that matter.

Again, treading on eggshells here without giving away the game, but part of what makes Barbarian such an entertaining watch is something as simple as the wry fun Cregger has behind the camera with this premise. There's a cheeky sensibility, though not one that lapses into self-parody, to see doors slowly but surely close on people or the way the camera gradually pulls viewers deeper and deeper into darkened hallways. These unabashedly spooky touches keep you on the edge of your seat wondering just what's around the corner or when Tess will realize what's happening around her. These are simple details, but they're also the kind of flourishes so many lesser horror movies forget even exist. What a welcome surprise to see them executed here with such confidence as Cregger never demonstrates a rush to get to the punchline, instead drawing out the suspense for all its worth.

There's also a constant inventiveness in Cregger's screenplay that's extremely welcome. Movies that rely too heavily on twists can end up feeling like just a series of revelations without a proper story or characters to give these shocking developments any sense of weight. Here, there's a fine balance between us getting invested in Tess as a character while also making sure Barbarian is constantly throwing out one "wait, what?" turn after another. Just like in his measured camerawork, Cregger shows a thoughtfulness in his writing that doesn't distract from the chilling atmosphere on the screen. Like the best visual effects work, it's only after the credits began to roll that you appreciate the craft that went into the writing and directing of Barbarian.

The chills are plentiful in Barbarian, with many of them coming from a delightful disinterest in playing things "grounded" or "respectable." Blood doesn't pour out the rafts in every scene, but Barbarian is all too content to get gnarly when the time is right and it'll send you squirming at just the proper moments. It's not the next Hereditary or His House in modern horror, but Barbarian delivered just what I wanted from an entertaining horror movie, complete with extra touches of dark comedy to boot. If it looks remotely appealing to you, you'll probably end up enjoying yourself a lot in Barbarian, especially if you can guard yourself against getting spoiled on the movie's biggest secrets.

Posted by Douglas Laman (NerdInTheBasement) at 10:57 AM