Blonde is more draining than compelling 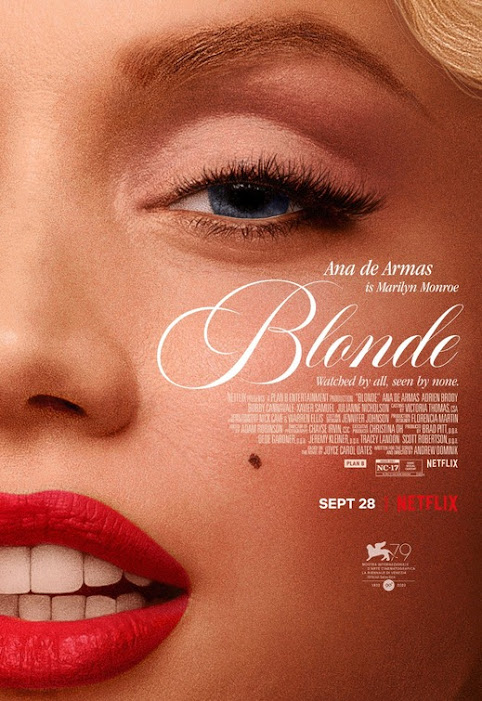 Andrew Dominik is not an upbeat filmmaker. His directorial works, up to this point, pretty much laugh at the idea of frivolity. That's not a bad thing, though. With The Assassination of Jesse James by the Coward Robert Ford, Dominik used this bleak outlook to undercut the various forms of mythologizing that had soaked through the reputations of James and Ford. Neither one was all good or all bad, they were people, not legends. Killing Them Softly was a grimy crime saga that spiraled into a warning that the problems with America were so deeply entrenched in this country that not even the "hope" of the Obama era could hope to rectify it. "In America, you're on your own," Brad Pitt gravely intones in the film's final moments, aptly and unforgettably summarizing its themes. "Now where's my fucking money?"

With Blonde, Dominik, who is adapting a book of the same name by Joyce Carol Oats, now sets his sights on applying this tone and atmosphere to the life of Norma Jeane/Marilyn Monroe. This performer's life was so riddled with tragedies that it's easy to see why the tone of Killing Them Softly would seem like the perfect aesthetic to tell her story. But something got lost in translation here. Dominik's earlier narrative films dumped a bucket of cold bleak water on less nuanced perceptions of history. By contrast, Blonde doesn't bring much new to the vast catalog of movies that explore how old-school Hollywood was not kind to women.

Blonde begins with the tormented childhood of Norma Jeane Mortenson (played as a kid by Lily Fisher, but largely portrayed as an adult by Ana de Armas). Living with an abusive mom, Gladys Baker (Julianne Nicholson), and always being told about an absent father who worked in Hollywood, Jeane's life is not off to the best of starts. Her hardships only increase once she pursues an acting career, which eventually entails a plan by Hollywood executives for her to perform under the stage name Marilyn Monroe. Jeane's fame begins to grow and grow, but she can't escape the misery that's plagued her from the day she was born. The life of the woman the world calls Marilyn Monroe is defined by brutal realities and suffocating fiction.

The dissonance between reality and the fiction we tell ourselves provides some of the most interesting moments of Blonde. A great instance of this comes as an adult Jeane is tending to her mother in a psych ward. This movie star is expecting a child and begins to talk to her mother about parenting, a task Baker undertook despite being single. "You did the right thing, not getting rid of me," Jeane says as the camera cuts to jagged and sound-free flashbacks of Jeane getting abused and terrorized by her mom. These memories have left a scar on Jeane, and yet, she still creates a justification that her mother was a good firm parent, just like every mother should be. It isn't just in her name that Jeane inhabits a fantasy. In trying to come to terms with her horrific childhood, she's also built up ways to defend her mom.

That's a fascinating way to explore her fractured psyche and Dominick finds other creative ways to blend fantasy and reality throughout Blonde. I especially liked the way the exploding bulbs of old-timey cameras function as something akin to the Jaws theme music, a warning of impending danger that can pop out of nowhere. Whether she's on a date or experiencing a medical emergency at the beach, Jeane has been so overwhelmed by the paparazzi that she hears those bulbs flashing and breaking wherever she goes. It's a great use of a period-specific sound effect and the way we're sometimes unsure if there are really cameramen nearby or if this is all in Jeane's head is well-played.

Unfortunately, too much of Blonde is more derivative and draining than insightful in terms of its depiction of Jeane's relentless suffering. Running for 167 minutes, Blonde keeps piling on one miserable event after another, to the point that its vision of the performer known as Marilyn Monroe sometimes doesn't even feel like a human being. She's often like the people in a Human Centipede movie, just a vessel for unique forms of torment. Her anguish reaches such extreme melodramatic heights that it often becomes unintentionally comical when clashing against the pervasively dour tone of Blonde. How else are viewers supposed to react to the sight of Monroe's fetus chastizing her for getting an abortion earlier in life, all played straight?

That moment exemplifies why Blonde, despite some interesting moments and a strong lead performance from Ana de Armas, ends up fumbling the ball. Its attempts at insight into the mind of Norma Jeane are just too heavy-handed and obvious for their own good, especially when executed inside such a dour production. If everything's going to be so serious and contemplative, shouldn't there be more interesting or original pieces of symbolism than a STOP sign inspiring Jeane to protest against an abortion? Aren't there more distinctive ways of depicting Jeane's constant anguish than just resorting to a succession of scenes where she gets brutalized by men on-screen? Also, returning to this again, must there be so many shots lingering on her fetuses like this is a Pure Flix movie warning of the dangers of abortions?

When the material isn't thuddingly obvious, it's just derivative of other movies. Glossy scenes depicting the early happy days of Jeane's marriage to Arthur Miller (Adrien Brody) prove especially distracting in how they take the lighting of a Terrence Malick movie combined with the stares into the camera from a Barry Jenkins feature. The constantly shifting aspect ratios had me thinking about how something like The Grand Budapest Hotel showed real thought when its framing was adjusted. Even two brief uses of what appear to be GoPro cameras strapped to people's chests just reminded me of everything from Pain & Gain to King Arthur: Legend of the Sword. It's one thing to be oppressively bleak. It's another to have that tone and also be frustratingly lacking in visual innovation.

You've seen what Blonde has to offer so many times before but often with a lot more depth. The one-note tone suffocates any chance of Jeane being seen as a human being, despite the game efforts of Armas. That's an especially strange flaw since Dominik's earlier movies did manage to capture recognizable human beings in the middle of tidal waves of misery. James Gandolfini in Killing Them Softly, for instance, reeks of heartache and missed opportunity, there's a human being there informing all the torment. Blonde, meanwhile, is all anguish, all the time. It's fixated on the screams of a woman in pain, but not on the psyche of the woman herself. What worked so well tonally for Dominik's earlier works just proves ill-suited and oppressive in Blonde.