Don't Worry Darling is messy, but not without charms 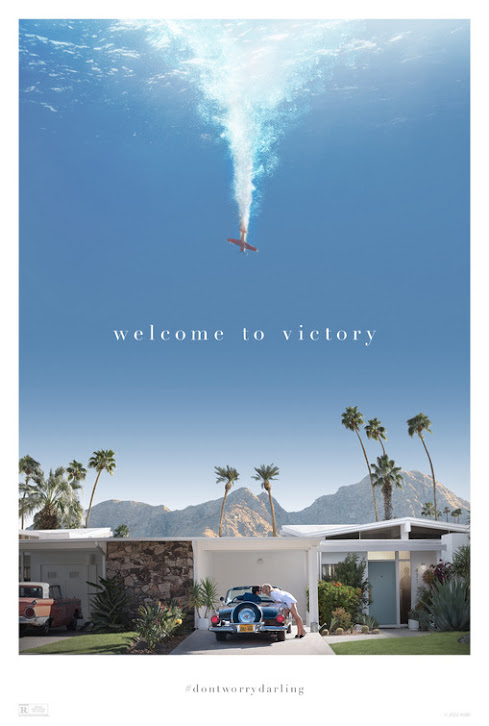 As Don't Worry Darling begins, 1950s housewife Alice Chambers (Florence Pugh) is playing a drinking game with her husband Jack (Harry Styles) and their assorted friends. There are laughs a-plenty at this shindig and, combined with just how passionate the sex life of Alice and Jack is, seems to indicate that everything is blissful in their life living in the company town known as Victory, California. Slowly but surely, though, Chambers begins to feel something is amiss. Maybe it's some of the words she hears over the radio spoken by Frank (Chris Pine), the leader of this community. Maybe it's the flashes of weird black-and-white imagery that spark in her head. Maybe it's the inexplicable plane crash on the outskirts of town that nobody else remembers. Whatever it is, Chambers becomes more and more convinced something is wrong here, despite every nearby man, and even her lady pals, telling her not to worry.

Don't Worry Darling follows a long tradition of media that wonders what kind of dark underbelly lied beneath the seemingly idyllic picket fence-lined world of America in the 1950s. Everything from the works of David Lynch to Far from Heaven to Pleasantville to even scenes in Joe Dante's Matinee have commented on how not everything was so rosy in an era that restricted so many rights for marginalized groups, especially people of color. Unfortunately, the long list of great films that have covered this terrain before means that Don't Worry Darling is working under a lengthy shadow it can never quite escape. Even if the likes of Blue Velvet didn't exist, though, there would still be some critical flaws dragging this enterprise down.

However, the presence of problems doesn't mean the absence of virtues. Don't Worry Darling has its fair share of commendable attributes, including whenever director Olivia Wilde indulges in explicable creepy imagery. Letting bursts of often-monochromatic puncture the typical color scheme and ambiance of an average scene without lengthy explanations as to their meaning provide plenty of eerie moments. Meanwhile, the way Wilde's camera lingers on shots of steaks covered in spices, runny eggs, or coffee getting poured so tight that we can see their every imperfection or the finer details of their textures effectively conveys a quiet sense of unease. Just as there's something uncomfortable or unsavory on this food if you look closely, so too is there danger hiding in plain sight in the life of Alice Chambers. Whenever Wilde and screenwriter Katie Silberman let Don't Worry Darling just be unnerving without holding the viewer's hand to explain why it's unnerving, it functions as nicely chilling.

Unfortunately, Silberman's writing eventually floods the screen with exposition and backstory in the third act. An avalanche of explanations just isn't as frightening as something perplexing. There's a reason something like Mulholland Drive ends on an ambiguous bang rather than a PowerPoint presentation breaking down what you just watched. This section of Don't Worry Darling also suffers from a strange decision to stop and start the basic premise of the entire movie. The pause doesn't last long enough to either leave an impact or justify its presence in the story. It's a strange move that just ends up disrupting the tension in the narrative.

As for storytelling problems plaguing the whole movie, Don't Worry Darling's stabs at social commentary could've used more bite and specifics. Without getting into spoilers, at times it almost feels like it's dancing around calling a spade a spade when it comes to misogyny in an effort to not alienate general moviegoers. The weird treatment of women of color characters (poor KiKi Layne has nothing to do with her disposable supporting role) also undercuts Darling's intended message of underscoring the humanity and complexities of women. Like many mainstream American movies trying to tackle weighty issues, Don't Worry Darling can't quite reach its most insightful thematic aspirations.

If there's somewhere the film excels, it's in its performers. Shocking nobody, Florence Pugh once again crushes a lead performance. The woman responsible for those hauntingly powerful sobs in the opening of Midsommar puts that kind of talent to great use again depicting the pronounced anguish of Alice Chambers. Chris Pine, though not in the movie as much as one would expect, is also terrific, perfectly capable of conveying a commanding presence with an uneasy slimy undercurrent. A dinnertime tête-à-tête between him and Pugh is easily a highlight of the movie thanks to the terse rapport between the two performers. Unfortunately, Harry Styles is the weak link of an otherwise commendable cast. He isn't awful, but his penchant for big gestures and yelling come off as a touch ameteurish, especially when compared to the more subtly detailed lead turn from Pugh.

Composer John Powell also turns out to be a highlight of Don't Worry Darling with his unnerving score. While he's spent much of his time since 2011 concocting music for animated family movies (and typically doing it well, as seen by his unforgettable How to Train Your Dragon compositions), Powell's well-versed in adult-oriented cinema, like the Bourne movies. Those Paul Greengrass titles, all about cloud identities and ambiguous loyalties, seemed to have given him plenty of perfect experience for Don't Worry Darling, as Powell's score here conveys a gripping sense of frayed uncertainty. It's a great detail to have it become more and more prominent as the story goes on. The increasing presence of these paranoia-drenched orchestral tunes reflecting Chambers becoming more and more conscious that something is askew about the world around her.

Don't Worry Darling has a lot going for it, including some great performances, another commendable score by John Powell, and Wilde's chops as a visualist. Unfortunately, for every inspired element of Don't Worry Darling, there's something frustrating lying in wait, particularly in its flawed attempts at social commentary that lack vital originality or intersectionality. Don't Worry Darling can never quite escape the feeling of "I could be watching Pleasantville again right now", but it isn't a bad film and it's better parts deserve to be noticed more than its cursed press tour.