Men is a flawed horror film but not without its virtues 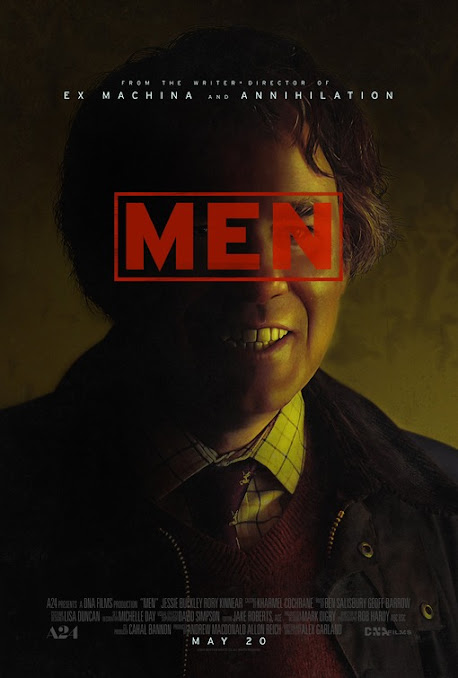 Men is a movie that's more interesting in terms of what it's showing than what it's saying. In terms of offering social commentary on gender roles, the experiences of women at the hands of abusive men, and the widespread nature of patriarchial society, it's not bringing anything tremendously new to the table. As a cinematic encapsulation of wandering through a nightmare that grows increasingly inexplicable, though, it proves much better and more compelling. It's a pity that Men couldn't reach its intended goals of saying something truly profound, but it's impossible for me to dismiss a movie that left my jaw this agape and nerves often rattled.

Harper Marlowe (Jessie Buckley) is walking around in a daze. Ever since her abusive partner recently and inadvertently killed himself, she's felt haunted, she just can't seem to leave that horrifying day behind. No better place to go for isolation than a small woodland cottage, one overseen by Geoffrey (Rory Kinnear). Surrounded by bright green foliage and inviting tunnels, Harper soon finds herself being stalked by some...thing. This figure, like Geoffrey and every other man in the nearby vicinity, all share the same face. Harper will be seeing a lot of that terrifying mug as she grapples with now having a physical force as relentlessly intrusive on her life as the psychological trauma she's dealing with.

The best trait writer/director Alex Garland brings over from his 2018 classic Annihilation into Men is a recognition for how beautifully things can be terrifying. Men takes place not in a dystopian wasteland, but in a lush forest that seems tailormade to be plastered on a postcard. It is here that stalking humanoids or creepy children wearing masks can stick out like a sore thumb, they feel like a extra egregious intrusions on a harmonious status quo. Men eventually delivers on a more traditional nighttime climax chock full of blood and guts, but Garland primarily, and thankfully, doesn't forget how potent daytime brightness can be for horrifying storytelling.

Garland also happily opts for the inexplicable in his visuals, like the nighttime sky suddenly transforming into a much star-heavier canvas that swallows up surrounding trees and clouds at one point in the finale.  All the imagery involving the various men with Kinnear's face in this home stretch of the movie becomes similarly unnerving and bizarre. These details exacerbate the sensation that we've wandered into a nightmare, one where memories of the concrete past and heightened manifestations of internal woes are folding onto one another. The dreamlike quality of the features visuals even help to create excuses for some shortcomings in the narrative.

Harper, for instance, is indeed quite passive as a protaganist for a traitional narrative film. However, I've certainly experienced nightmares where I was more spectator than instigator of all the chaos happening around me. Filtering her role through the lens that we're watching something mimicking the aesthetic of a dream makes Harper's being primarily a reactive characters a much more understandable outcome. It helps too that Jessie Buckley is really good at outspoken displays of powerful emotion. She isn't anywhere Florence Pugh in Midsommar levels of powerful display of vulnerable emotions in horror movies, but she can still let out a scream that makes your heart shiver.

Buckley and Kinnear's strong work in the lead roles (the latter actor excelling at injecting unique little details in each of the characters he's playing), commitment to truly strange imagery, and an ominous aesthetic are enough to make Men a fine watch, especially since it runs just under 100 minutes before the credits start. Unfortunately, the film is frustrating in its multiple instances of overly obvious imagery and dialogue. The term "stupid bitch" as a recurring insult to Harper, for instance, is fitting for what people write online towards women expressing an opinion about...anything, but I wish the film had gone even deeper in exporing how misogyny manifests in society. Give me a cinematic reflection of that inequality that I can't just find in a random internet comment section.

Whenever Men is all about mood and atmosphere, it's an agreeably unnerving exercise. Whenever it tries to offer something "profound," Garland just doesn't offer much that's new or insightful. Unfortunately, there's enough instances of Men tripping up on its grander thematic ambitions to keep the film from fulling its weightiest aspirations. Men ends up registering as less than the sum of its parts, but at least some of those parts provided the sort of chills and visuals I can't help but admire.