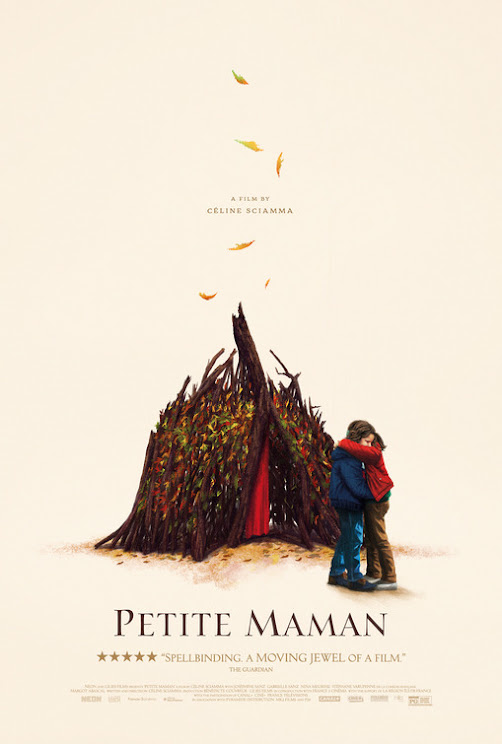 It can be hard to remember, but our parents didn't start their lives as our parents. Just because we've only known them as Mom, Dad, or any other term doesn't mean that's all they are. They were also once kids, teenagers, twenty-somethings, people with lives beyond just the youngsters they raised. Eight-year-old Nelly (Josephine Sanz) gets a vivid reminder of this truth in the newest film from Celine Sciamma, Petite Maman. Those expecting another beautifully-filmed and quietly touching film in the mold of past Sciamma classics like Portrait of a Lady on Fire or Girlhood will be most pleased with everything Petite Maman has to offer.

Nelly begins Petite Maman grappling with the loss of her grandmother, who struggled for years with a harrowing disease. Her mother (Nina Meurisse) then takes Nelly to clean out her grandmother's house, the same place this mom had grown up in years prior. While playing in the nearby woods, Nelly encounters a young girl named Marion (Gabrielle Sanz) and the two hit off as fast friends right away. However, Nelly quickly realizes that Marion isn't just a new pal, but her own mom at eight years old. Somehow, Nelly is now able to wander in and out of the past, including encountering her grandmother and her house from decades prior.

Sciamma correctly never explains how or why Nelly can suddenly wander across time. There's no need to overcomplicate the plot with a deluge of expository dialogue explaining the mechanics of moving through time. The importance here is not on how Nelly is going into the past, but rather the friendship she develops when stumbling into the 1990s. This wise storytelling move shows how Sciamma understands completely what the priorities of Petite Maman. Such priorities mean that the lion's share of the runtime is dedicated to several endlessly delightful sequences consisting solely of Nelly and Marion bonding, playing, and being goofy. Just try and not crack a smile at these kids doing a rendition of a dramatic detective movie!

These are the moments of Petite Maman that warm your heart because of what you're seeing. But the movie proves equally adept at being moving when it comes to what you don't hear. In Nelly's first trip to Marion's house, she encounters the girl's mother, A.K.A. her own grandmother. This lady is, of course, decades younger, but still walking with a cane, an indicator of the disease she'd perish from. Nelly says nothing as this parental figure makes her way across the kitchen to attend to the two children. The absence of noise or dialogue speaks volumes about all the emotions Nelly is working through right now, as she's confronted with the family member she feels she never got to properly say goodbye to.

Quiet moments of poignancy like that are littered throughout Petite Maman, which finds ingenious ways to get so much emotional power out of figures from disparate points in time colliding. Such moving segments don't come at the expense of these kids acting like authentic children. These are not cutesy caricatures of kids nor tiny organisms full of sitcom-level quips. Nelly and Marion are very realistic portraits of eight-year-olds and their behavior. This is even seen in moments where they utter wise or impactful phrases. These pieces of dialogue are weighty, but they feel appropriately incidental, like Nelly or Marion have no clue of the power of what they're saying. Sciamma's screenplay is a contemplative exercise about the past and present, but not at the expense of its adolescent protagonists.

Their interactions take place against a backdrop of natural environments covered in orange and yellow colors coming from all the fallen leaves. Yes, Petite Maman is set in Autumn and what a beautiful landscape to tell such a sweet but melancholy yarn. Much like with Fantastic Mr. Fox, Petite Maman reminds one of all the incredible visual opportunities afforded by setting movies in the final months of the year. Framed by cinematographer Claire Mathon (reuniting with Sciamma after their unforgettable work on Portrait), the exterior colors as well as the hues of the house, like the deep blue tiling in the bathroom, convey such a warm and inviting aura. I could practically feel the crackling of leaves beneath my feet or feel the texture of wallpaper on the house. What an appropriately transportive quality for a story about moving across passages of time.

The visuals are in service of a story that, among its countless other virtues, shows appropriate restraint in scope. There's only five characters with notable amounts of dialogue in here and 90% of the story is set either in one house or the surrounding woods. Turns out, that's all you need for a movie like this. the intimate nature to the scope and cast means that we have a chance to not only understand the characters more, but also the environments they inhabit. This house Marion was raised in is so important to both of the leads for different reasons. Shifting across a wide variety of sets could've meant losing sight of this location in the process. Instead, Sciamma keeps viewers firmly rooted here, in the process wringing maximum pathos out of minimum locales.

Time is a daunting force throughout Petite Maman. Nelly is dying to know more about the childhood of her parents, Nelly's mother, as an adult, is so overwhelmed with the present that she vanishes from her daughter's life for a few days. Adolescent Marion, meanwhile, is concerned with the future as an important surgery is on the horizon and she's petrified of dying. Time can often be cruel, especially in how its inevitable march takes away loved ones before we even have the chance to say goodbye. With Petite Maman, Celine Sciamma creates a movie cognizant of the horrors of time. But she also posits a fantastical scenario where fiddling around with the past and presents allows one mother and daughter to bond. The result is a movie that's beautiful in its cinematography, quietly powerful in its performances, and deeply moving in every way.

Posted by Douglas Laman (NerdInTheBasement) at 11:29 AM