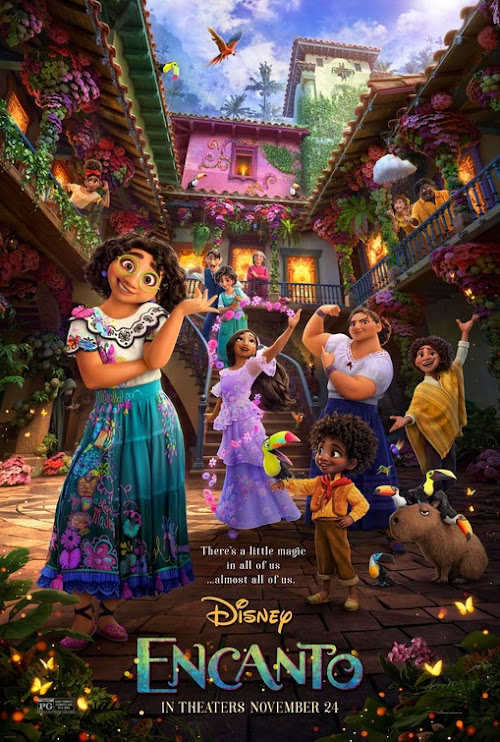 Right after he passed away, the animators at Disney scrambled to figure out what feature-length animation from this studio should look like. To help provide some guidance, people took to asking the question "What would Walt do?" In retrospect, it's a silly question. Who knows what Walt would do? The man was always looking to new horizons in films, television, theme parks, whatever. Trying to fit that creative vision into a tidy box was a fool's errand.
Yet, watching Encanto, I couldn't help but imagine that this was a movie that was following in the footsteps of Walt's vision for feature-length animation. Not necessarily in the fact that it is mimicking the exact jokes, pacing, or narrative beats that one of Disney's cartoons from the 1930s or 1940s would've done. In fact, what's cool about Encanto is how some of its comedy and fast-paced storytelling echo modern animated films from Phil Lord & Chris Miller, a great way of making sure the story connects with modern youngsters. However, Encanto is a movie that, harkening back to the days of Pinocchio, does indeed deliver a tear for every laugh, tells a story that could only be done in animation, and makes you so invested in animated characters that they feel like flesh-and-blood people.
Mirabel Madrigal (Stephanie Beatriz) lives with her extended family in their magical home, the Casita, the perfect domicile for a gaggle of superpowered individuals. Yes, everyone in Mirabel's family has special gifts, like being able to hear anything no matter how quiet, shapeshifting, super-strength, you name it. But Mirabel's the only one in the family that is just a normal human being with no gifts. Her lack of any magical abilities makes Mirabel desperate to please her grandmother, Abuela Alma Madrigal (María Cecilia Botero). The outsider of the Madrigal family soon becomes conscious of Casita being plagued by cracks and some strange occurrences surrounding people's superpowers. Abuela alma Madrigal insists everything's fine, but Mirabel is determined to do whatever it takes to help out the family.
The requisite elements of an animated Disney musicals mean you might expect, from that plot summary, for Encanto to begin and its premise with a simple moral related to "being yourself" or how "we're all superpowered, you know". Interestingly, screenwriters Charise Castro Smith and Jared Bush (both of whom also direct alongside Byron Howard) opt to take things in a more complicated direction that I won't spoil here. Needless to say, though, things get more than a little thorny in Encanto and the plot does a great job exploring darker material without disrupting the lighthearted vibes of the production.
What I can talk about is the great storytelling decision to confine the action primarily to the Casita. Individual rooms in this place are like Snoopy's Doghouse or the TARDIS, where they look small on the outside but are expansive inside, so it's not like the whole film takes place in cramped rooms like The Humans. However, keeping things restricted to just this magical house proves to be a great way to get to know the various members of the Madrigal family better. It also lets the conflict between individual relatives simmer properly and allows the focus of the story to rest on the perspectives of Mirabel and company rather than shoving in as many locations as possible. Plus, the limited amount of environments means that the deviations to more surrealistic backdrops for the musical numbers can work like gangbusters through the power of juxtaposition.
A lot of thought and an equal amount of heart has clearly gone into Encanto. Its commitment to exploring the complicated ways family members relate and feel about each other is especially packed with nuance and poignancy. The detailed nature of the writing extends to how Mirabel is presented as a protagonist. She's such an endearing goofball of a character and perfectly brought to life through vibrant voicework from Stephanie Beatriz. After impressing for so many years as Rosa Diaz in Brooklyn Nine-Nine, Beatriz leaves that character behind in her warm yet realistically imperfect vocals as Mirabel. Botero and John Leguizamo are the standouts in the supporting cast, with the latter especially impressing with the tonally complex nature of his role.
This voice work is applied to computer-animated characters who inhabit a world that's just gorgeous to look at. While many modern animated films, like the 2019 Lion King, throw color out the window in favor of chasing unobtainable "realism", Encanto drenches every frame in vibrant hues and gorgeous-looking sets you could only properly realize in the confines of animation. It all looks so beautiful and the lively camerawork lets you soak in all the details. The only drawback for me in the animation was the occasionally distracting dissonance between cartoony humans and realistic visual details. Textures in the brick floors of Casita or the grass outside look ripped from reality, but the decidedly stylized human characters do not, and putting those together can create some distracting moments. They're few and far between, but once again, I ask the animation studios at Disney to lean on more stylized backdrops (like the ones in Encanto's musical numbers!) and not go for ultra-realism all the time.

Some quibbles in the balance between realistic and stylized design choices, as well as some predictable plot details, aside, Encanto delivers an extremely entertaining time. It's a superb crowdpleaser movie,  the kind that dazzles your eyeballs and, thanks to a bevy of new tunes written by Lin Manuel-Miranda, pleases the ears. However, it also doesn't forget about touching your heart, with the emotional beats being especially effective thanks to the filmmakers committing to such an intimate scale for this story. I could posture behind a bunch of ramblings to justify why I liked Encanto so much, but any movie that gets me crying and smiling so often has to be worth recommending. Sometimes, it's that simple.