Drive My Car is a top of the line model, er, movie 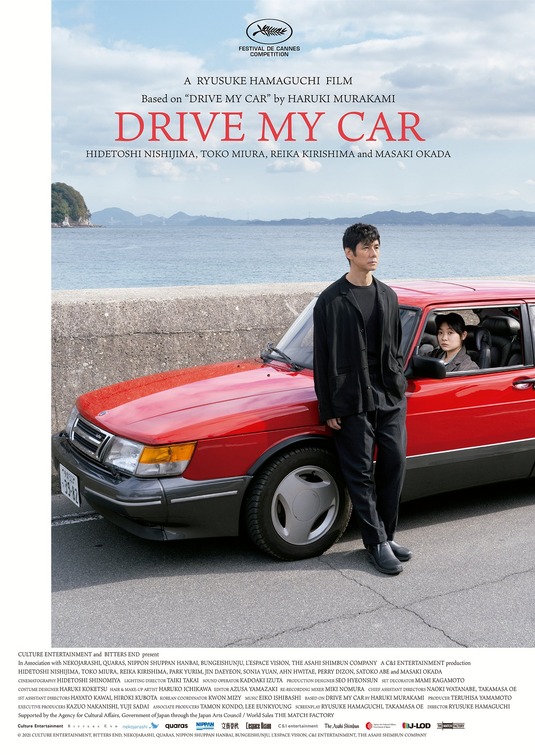 Playwright Anton Chekhov once said, "Any idiot can face a crisis, it's this day-to-day living that wears you out." That sort of living is at the center of Drive My Car, a movie that makes mundane life every bit as captivating, and even more so, than movies that cram their runtimes with wall-to-wall action. The emotions director Ryusuke Hamaguchi is dealing with are so palpably realized, and his direction is confident enough to just linger on the smallest bits of human behavior, it's impossible not to become transfixed. Like Chekhov's writing from years past, Hamaguchi recognizes that confronting everyday experiences in an appropriately complicated way is more than enough to keep your eyeballs glued.

Yūsuke Kafuku (Hidetoshi Nishijima) is a theater director whose life is plagued by constant troubles. First, his doctor informs him that he's got glaucoma, which is impairing his vision enough that he can no longer drive. Worse yet is that Kafuku's wife passes away suddenly from a cerebral hemorrhage. After two years pass, Kafuku is hired to direct a production of Uncle Vanya for a theater company in Hiroshima. As part of his gig, he's required to have a driver chauffeur him around. Misaki Watari (Tōko Miura) is the woman for the gig and her quiet disposition makes her a perfect fit for the similarly reserved Kafuku. Over time, the wall Kafuku has put between himself and the world begins to crack, though the pain of the past is constantly lingering over his existence.

A movie as good as Drive My Car deserves the most thoughtful analysis possible. Paradoxically, a movie this excellent leaves me in a state where I just want to blabber about my favorite scenes or moments in a stream of consciousness that barely leaves room for breaths. Like a scene where Lee Yoon-a (Yoo Rim Park) and Janice Chan (Sonia Yuan) rehearse a scene for Uncle Vanya out in the crisp Autumn air. Every aspect of the scene is beautiful, the tender and subtle camerawork is the perfect window to this pivotal moment in the play's production, and the two performers share such a meaningful discernible connection in their rapport. No wonder Kafuku sees this particular rehearsal as a pivotal moment for his show!

The measured pacing of the story of Drive My Car allows scenes like this to unfold in an organic manner. Hamaguchi is never barrelling forward to the next scene, there's a naturalism to how things play out that's utterly masterful. This approach also works great for the quietly tormented emotions that the primary characters live with. There are no speedy cuts or whip-fast pacing to allow these feelings to get lost in a flurry of activity. Instead, they simmer, they fester, they leave an impact. Going this route also gives the viewer a chance to appreciate all the tiny details in the filmmaking right down to how perfect the crunch of snow and leaves under the character's feet sound.

As a cherry on top of this delicious narrative sundae, framing Kafuku's journey as a character to run parallel with putting on a production of Uncle Vanya is a genius move. The assorted parts of the play directing process make for a great physical manifestation of his interior world and offer up several chances for the supporting characters to leave a mark. Also an ingenious idea to use dialogue from this play as a means of expressing bottled-up emotions inside Kafuku. Ditto the visual of Kafuku reciting lines from his plays against a tape in his car. What a great way of immediately telling the audience that this guy is so cut off from others that the only way he can converse with others is through engaging with pre-recorded dialogue.

There's so many distinctive touches like that scattered all throughout Drive My Car that work especially well at ensuring that the pain these characters are enduring doesn't become derivative of other movies. There's an especially singular quality to the eventual tragic backstory of Watari, whose life gets gradually revealed to the audience in a fascinating manner. The complicated emotions that Kafuku must grapple with (namely that he discovered his wife was cheating on him before her demise) also lend such specifity to Drive my Car and capture the real nuances of actual existence. Coping with grief doesn't result in tidy emotions nor are the people we mourn just simple caricatures of good and evil.

Such richly-detailed material is perfectly handled by the cast, headlined by a haunting turn from Hidetoshi Nishijima. He portrays Kafuku as a shell of a man, one whose haunted nature is captured with just an unforgettable mournful glance. Special props among the supporting cast, though, to Yoo Rim Park, whose exudes such a captivating aura in her role. Her performance also makes use of Korean Sign Language, which is put to great use during the characters acting in Uncle Vanya. Seeing Park's hands capture such dense emotion with the flick of a finger or turn of her hands is astonishing and made me yearn to see an entire Chekhov play done in sign language!

Day-to-day living can certainly wear you out, Chekhov wasn't kidding. Drive My Car doesn't offer an instant elixir to cure those daily blues. But it does offer an unforgettable portrait of that form of anguish. Said portrait comes in the form of a beautiful contradiction as this movie brings together an assortment of people isolated from the world around them in the wake of unspeakable tragedies. Ryusuke Hamaguchi has delivered an outstanding achievement with Drive My Car, an appropriately subdued piece of cinema that still speaks volumes about carving out some kind of existence after disaster strikes. Put the pedal to the metal and check this movie out whenever it comes to a theater near you, it's just sublime filmmaking in every sense.