Being the Ricardos isn't quite worth tuning in to 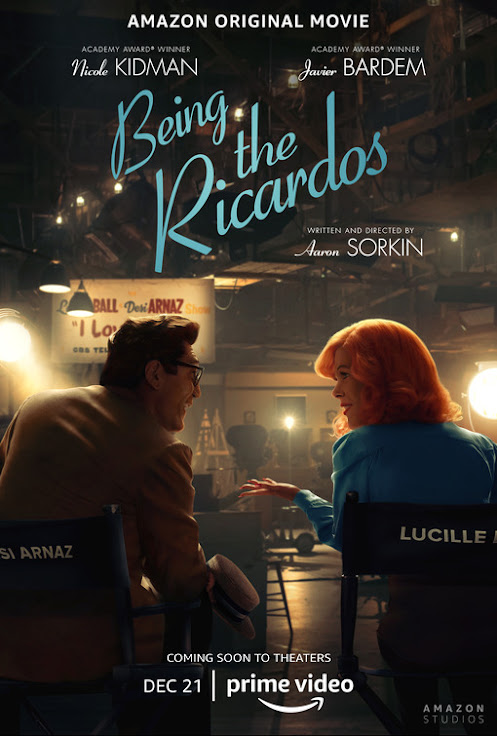 It’s time to put on a show. Or at least prepare one. It’s Monday morning and the cast and crew of I Love Lucy have five days to execute a new episode of the most popular TV show on the airwaves. But there’s a problem. Lucille Ball (Nicole Kidman) has been accused of being a communist. Her real-life husband and sitcom co-star Desi Arnaz (Javier Bardem) is convinced there’s nothing to worry about. No major publications are talking about it, surely it’ll blow over. But Ball’s mind is gripped with fear over how this could topple a show she loves with all her heart. As she goes through the next few days getting every detail of this I Love Lucy episode just right, various flashbacks show the audience how Ball and Arnaz met, as well as the ways they’ve betrayed and supported each other over the years.

Of his three directorial efforts so far, Being the Ricardos is probably the strongest thing Aaron Sorkin has helmed so far. He’s still not a great visualist, but there are more interesting visual flourishes (like the shift to black-and-white coloring for scenes where Ball’s outlining her ideas for I Love Lucy moments) here than in The Trial of the Chicago 7. Meanwhile, Sorkin’s penchant for embracing traditional crowdpleaser moments seems to have a greater purpose here. The whole plot is built on the idea that reality is intruding on this sitcom. As a parallel, deflating moments of harsh truth poke the balloons of joy that Being the Ricardos inflates during seemingly straightforward moments of triumph.

Though better than Chicago 7 and Molly’s Game, Ricardos still isn’t good enough to challenge my perception that Sorkin is one of those screenwriters whose scripts work bests when handled by other directors. The biggest issue at work here is that the narrative device of setting the story over five days of production on I Love Lucy keeps getting undercut by repeated flashbacks to the past. The simmering tension in this workplace never feels as potent as it should since Sorkin keeps darting all over the place. Ball may be determined to stay on set, no matter how late, to get her show right, but Sorkin shows a frustrating lack of commitment to this crucial locale

The intrusive nature of these flashbacks wouldn't be so much of a problem if they were either illuminating on the interior lives of Ball and Arnaz or at least entertaining. Unfortunately, these digressions don't rise to the challenge on either front. To add insult to injury, one of these visions of the past, set by the pool during daytime, features some truly hideous green-screen work that distracts from the dialogue. These segments also don't give lead actors Nicole Kidman and Javier Bardem opportunities to improve their mixed performances, another key factor of Being the Ricardos that leave something to be desired. Kidman's work never feels removed enough from Kidman's default acting persona. I didn't want her to do a straightforward Lucille Ball impersonation, I just kept yearning for her to root me in the story I was watching rather than remind me of her prior performances.

On the other end of the spectrum, Bardem revels in being a wholly different beast compared to his prior intimidating roles in No Country for Old Men and Skyfall by playing Arnaz as someone with smiles and energy to spare. It's certainly a lively performance, but it also feels too detached from reality to work properly. Bardem's got energy to spare, but he too often lapses into caricature. For vastly different reasons, both Kidman and Bardem struggle to make their portrayals of sitcom legends work as human beings.

It doesn't help that the duo is surrounded by a pack of character actors in supporting roles who deliver considerably superior and more believable work. J.K. Simmons as William Frawley, for example, provides welcome nuance into a cantankerous heavy drinker who also knows more than you might think, while Tony Hale gets to inject similar levels of complexities into the part of Jesse Oppenheimer, which initially seems like it'll be just another instance of Hale playing a neurotic antagonist. The best of the bunch, though, is Alia Shawkat. That subdued but confident delivery she mastered playing Maeby on Arrested Development turns out to be perfect for executing Sorkin dialogue. She's got the most memorable comic line deliveries in the whole movie, particularly a retort to the curiosity of a writer (played by Jake Lacy) regarding what Arnaz and Oppenheimer could be talking about behind closed doors.

The strong supporting cast and a solid helping of memorable exchanges that only Sorkin could write make the best scenes in Being the Ricardos a diverting affair. Plus, it's cool that Ball gets framed as a controlling genius without also getting coded as a villain, which doesn't always happen for women with those kinds of personality traits. Ball as depicted here is the kind of character Benedict Cumberbatch can play regularly, but women rarely get to inhabit, so that's nice to see. Even with these attributes, though, the whole movie never abandons the nagging feeling that it should be better than it is. Trying to frame Ball's communist scare and relationship friction between the stars of I Love Lucy as big dramatic events just doesn't work, at least not in this context. The proceedings keep trying to tell you they're massively important without giving you a reason for the urgency. Though it's Sorkin's best directorial effort to date, Being the Ricardos is still a movie that's impossible to fully love.