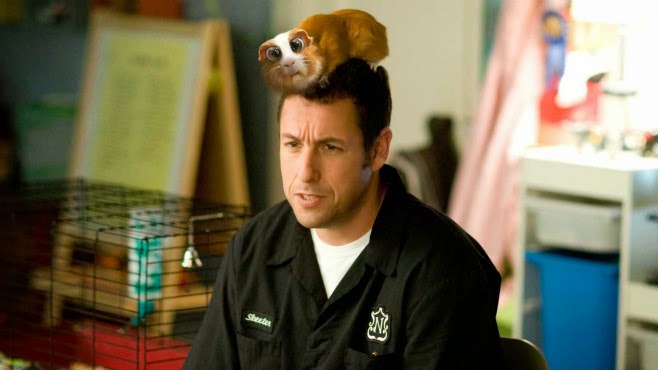 This past weekend, Adam Sandler had one of his worst box office openings in history. Although narrowly above That's My Boy in box office estimates, it's still an atrocious opening that shows just how far the mighty have fallen. Curiously, this isn't Sandler's first box office blunder, but it was presumed that previous recent flops Jack & Jill and That's My Boy were due to their PG and R ratings that differentiated themselves from the PG-13 rating that Sandler excels in. That makes Blended's failure even more puzzling; it's PG-13 rating seemed to prime it for inevitable success.

Of course, some minor factors likely played into it's demise (Warner Bros. might not be as equipped to market Sandler's work as his long time distributor Columbia is, while the crowded May calendar likely had a hand as well) but the inevitable has to be faced; Sandler is no longer a guaranteed draw. But don't worry Adam, this is the best thing that could happen to you. Now, unbeknownst to many audience members, another Adam Sandler movie is on the way towards the end of 2014. In fact, a gander at IMDB suggests two more are on the way.

But don't worry; they're not some updated version of The Rocketeer entitled The Farteteer. Instead, their both dramas from two very distinctive filmmakers; Thomas McCarthy and Jason Retiman. McCarthy's handling The Cobbler, while Reitman is tackling Men, Women And Children, which both feature Sandler in starring roles. If he can shine in both of those films, he may just remind us of his dramatic potential and show there's a life beyond gratuitous product-placement. Of course, there's more comedies on the horizon, with Pixels (that movie depicts Kevin James as the POTUS, which sounds like an element from a Robot Chicken sketch) coming next May, but still let's hold out hope.

After all, as Alfred said in Batman Begins, we fall so we can learn to pick ourselves up again. Perhaps by falling financially with Blended Adam Sandler can pick himself up creatively
.